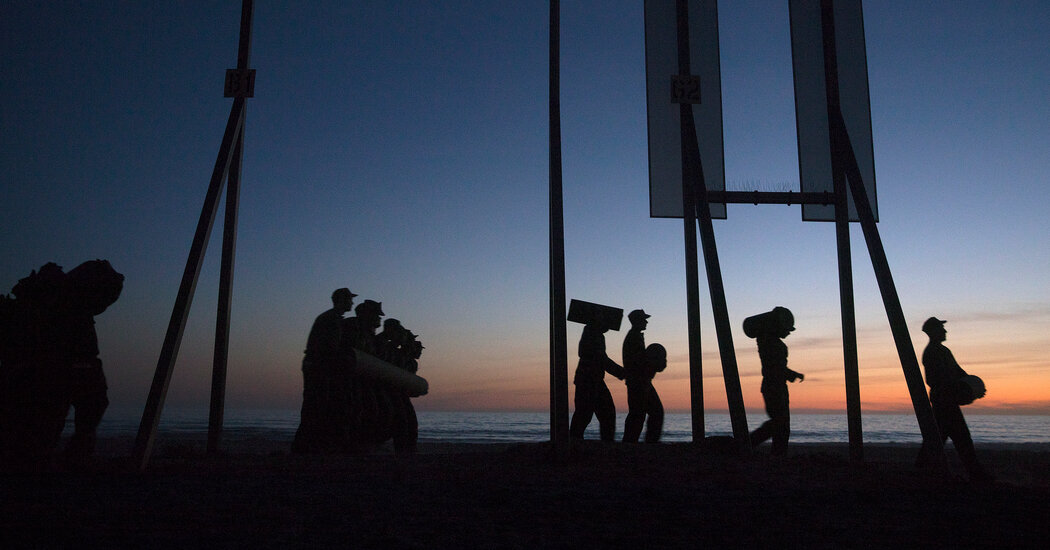 The Navy has started an independent investigation of the brutal selection course for its elite SEALs after a sailor’s death this year revealed a tangle of physical abuse, poor medical oversight and use of performance-enhancing drugs in the course.

The order for the new investigation came from the highest levels of the Navy — the outgoing vice chief of naval operations, Adm. William K. Lescher. It was given to a rear admiral from outside the SEALs, signaling that the Navy had given it high priority and wanted it to be independent.

Admiral Lescher issued the order in a letter obtained by The New York Times. The letter is dated the day after The New York Times reported that the sailor’s death had exposed a number of problems at the harrowing selection course, known as Basic Underwater Demolition/SEALs, or BUD/S for short.

Kyle Mullen, died hours after completing its most punishing phase. The vice chief gave investigators 30 days to report their findings.

The Naval Special Warfare Command, which includes the SEALs, had been looking into Seaman Mullen’s death and the surrounding issues on its own, and its findings were supposed to have been released in August. But they were held back after top Navy leaders indicated that they thought the report placed too much blame on the sailor and not enough on failures in the SEALs, according to a Navy official who is familiar with discussions about the report. The official asked not to be identified by name because he was not authorized to comment on an unreleased report.

The vice chief’s letter now directs the Special Warfare Command to stick to a very narrow inquiry into whether Seaman Mullen’s death occurred in the line of duty and to leave the larger questions to the outside investigators.

Capt. Bradley Geary, a decorated officer who served for a time in the SEALs’ most elite and secretive counterterrorism unit, known to the public as SEAL Team Six but referred to by SEALs as DevGru.

While Captain Geary was in charge, several changes were made at BUD/S, according to four current and former Navy personnel with knowledge of operations there. They asked not to be named because they feared retaliation from the tight-knit SEAL community.

A key change, they said, was removing a number of senior civilian advisers — all of them retired SEALs — whose job had been to watch over training, guide young instructors and step in if they saw unnecessary abuse or alarming medical problems.

The instructor staff was packed with men recently moved from DevGru, and instructors were given greater leeway to run classes as they saw fit, three of the Navy personnel said. With few civilian advisers around, they said, the leash was effectively off.

Captain Geary, who SEALs say is respected in their community, was transferred from command of BUD/S to his next assignment on schedule in June. He did not respond to several requests for comment.

Five sailors who were BUD/S students in 2021 or 2022 described a savage intensity that few SEALs before them had seen. The sailors asked not to be identified because they feared retaliation. They said instructors had hit, kicked and otherwise abused students and had often devised ways to try to drive them to quit.

Each BUD/S class is assigned a proctor — a SEAL instructor whose job is to be an ally and mentor for the students. But several of the sailors said their proctor would use his nightly mentoring sessions to inflict more punishment, having students run for miles in the dark and plunge repeatedly into the ocean.

Injured BUD/S students were called weaklings and quitters, and at times they were punished for seeking help. Medical personnel often stood by silently, or in some cases participated in the abuse, the sailors said.

Students were often allowed only two or three hours of sleep a night in the first weeks of the course, they said, even though their days were jammed with extreme physical toil. Exhausted immune systems broke down. Diarrhea, vomiting and pneumonia became common, but the sailors said students had tried to hide symptoms from instructors who seemed to target the injured.

One man who entered BUD/S in 2021 said he had gone to instructors at 5 a.m. one day with a painfully swollen leg, telling them that he believed it was broken and that he needed to see the medical staff. He said instructors had responded that the medical clinic did not open until 7 a.m. and had then ordered him to wait the two hours in the cold Pacific surf while the rest of the class was ordered to chant his name and tell him to quit. Medical personnel stood watching for an hour before pulling him from the water with hypothermia, he said.

Medical documents show that he ended up in the hospital, where he had to have surgery to remove a flesh-eating infection.

SEALs who went through BUD/S years ago said they had never experienced that kind of abuse.

A retired SEAL whose son recently tried to complete BUD/S said in an interview that when he had seen his son two weeks into the course, the young sailor was so swollen and covered with abrasions that he looked as if he had been in a motorcycle wreck. The father secretly got his son to a civilian doctor to get help without attracting the ire of instructors, he said. The son dropped out in the third week from exhaustion and injuries.

The retired SEAL said when he had qualified in the 1990s, BUD/S was hard, but the focus had been largely about learning teamwork and mental toughness. What his son experienced, he said, was more like “Lord of the Flies.”

The parent asked to be anonymous to protect his son, who is still in the Navy.

Four of the recent BUD/S candidates said that sailors had been using drugs to get through the course and that when instructors had briefed their classes on drug use, the emphasis was on not getting caught.

Parents, former SEALs and other Navy employees said in interviews that they had reached out to the SEAL chain of command, warning about dangerous conditions. The Navy official with knowledge of the investigative report said some changes had been made at BUD/S in response to those warnings, allowing students more sleep and dialing back the hardest parts of the course.

It was not enough to prevent a death.

The pace at BUD/S did not relent even after Seaman Mullen died in February. The next class passed even fewer students, and a number of sailors dropped out because of infections or broken bones.

The Navy official said that a number of instructors had been moved out of BUD/S training since February but that none had received any official punishment. Many are still instructors in later stages of SEAL training, he said.

Danny DeVito and Rhea Perlman have listed their cozy two-bedroom Los Angeles retreat for  $1.55 million.DeVito, who stars in "It's Always … END_OF_DOCUMENT_TOKEN_TO_BE_REPLACED