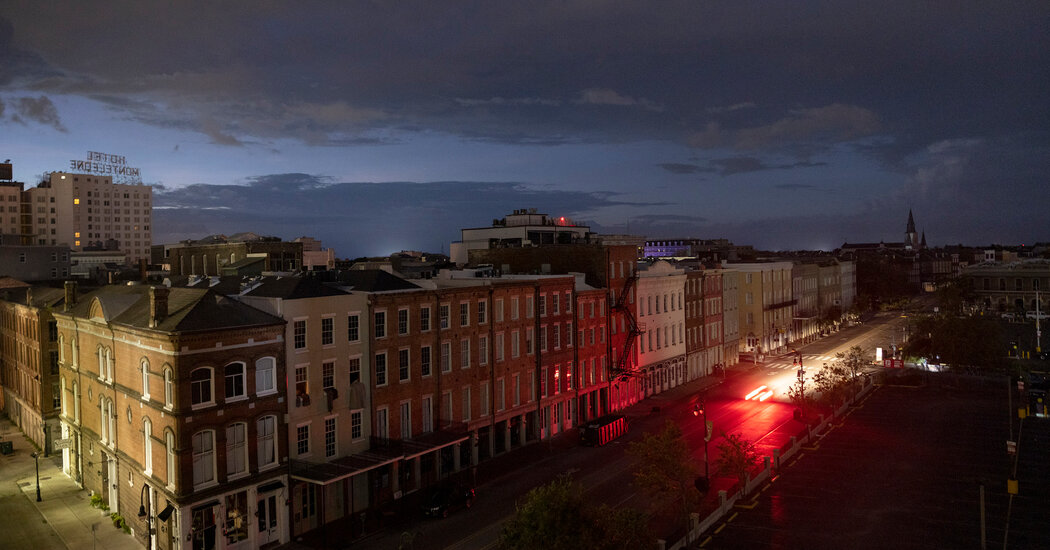 NEW ORLEANS — When Stephanie Crier emerged from her New Orleans apartment last week after hunkering down for Hurricane Ida, she was relieved to find that the storm had not flooded the city or left catastrophic destruction on par with Hurricane Katrina. But since then, things have only gotten worse.

It has been almost a week without power in her home. Trying to fall asleep in the heat is torturous, Ms. Crier, 60, said, and she has had to get up and wash herself with cold water in the dark just to get through the night.

As forecasters warned of dangerously high temperatures over the weekend, Ms. Crier was worried about taking care of her mother, who is 81 and returning to her apartment after finding a brief refuge with a friend.

“It’s a little bit unbearable,” Ms. Crier said as she sat on a folding chair in a gym that the city had converted into an air-conditioned cooling center. “If I could find somewhere to really lay down and stretch out, I might sleep all day and not wake up until the next day.”

heat index hitting 103. The number of visitors at the cooling center that Ms. Crier visited on Saturday nearly quadrupled between Wednesday and Friday.

“We’re definitely seeing more desperation out in the streets,” said Nate Mook, who leads the World Central Kitchen, a disaster relief charity that is giving out 25,000 meals a day in and around New Orleans.

provides electricity to much of Louisiana, has vowed to restore power to almost all New Orleans residents by Wednesday, which would be 10 days after many people’s lights went out.

But local officials said that each day that passed was making the situation more dire.

“As we get into this point five or six days in, we are starting to see the elderly and vulnerable populations — the heat is starting to have an impact,” said Collin Arnold, the director of New Orleans’s emergency preparedness agency. “It is kind of a race with the clock.”

moved its opening game on Sept. 12 to Florida because of the storm.

At the cooling center, Ms. Crier waited to meet with Federal Emergency Management Agency workers about the $500 in relief funds that the agency is paying to some survivors of the storm, but she was told that she was not eligible. She had planned to use the money to leave town and get a hotel — with electricity and air-conditioning — for her and her mother.

New Orleans Mission, said the charity was spending more than $1,000 each day just on fuel to power generators at its three locations, where it is sheltering more than 300 people. Every day, a team drives into Mississippi to load up tanks of diesel fuel and gas, he said.

“We’re still days away from power,” Mr. Proctor said. “We’re in a dire situation, the entire New Orleans metropolitan area — the lack of power, the smell of garbage.”

Not far away, under U.S. Highway 90 along the edge of the city’s Warehouse District, the roar of motorcycles and cars echoes through a makeshift neighborhood of dozens of tents, mattresses and blankets. Many of those living under the highway were doing so for months before the hurricane, and while they said some things remained the same — there were no air-conditioners or refrigerators to be lost — there have also been stark differences.

The stores and bus stops where people used the bathrooms are now closed, and the city has not cleaned out the portable bathrooms under the highway that are now filled with waste. And in the days after the storm, many of the generous citizens and church workers who regularly dropped off food were unable to reach them.

Pastor Joycelyn Santee, who regularly drops off supplies for the residents here, said she had not been able to return to the area under the bridge for several days after the storm because her house lost power and she had to attend to her own family. But she was determined to return, and she and her team arrived on Saturday with trunks full of toilet paper, bags of ice, toothpaste, deodorant, food and more.

GREENVILLE, N.C.--(BUSINESS WIRE)--Employers aiming to win the war on talent have a new “A” team to tap into: college and professional athletes. … END_OF_DOCUMENT_TOKEN_TO_BE_REPLACED

Mortgage rates are likely to rise in July, extending a seven-month streak. High inflation, and the Federal Reserve's efforts to control it, have … END_OF_DOCUMENT_TOKEN_TO_BE_REPLACED