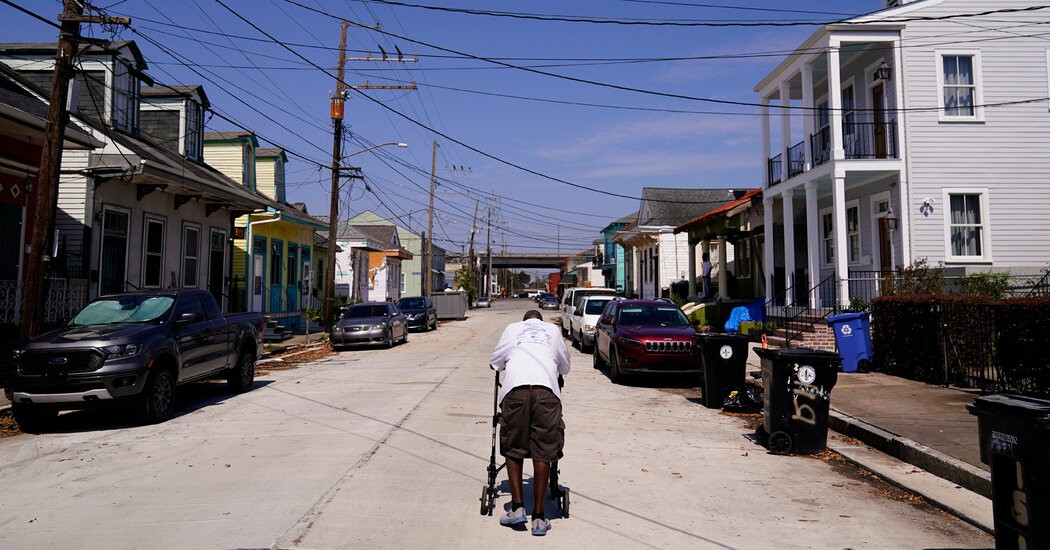 NEW ORLEANS — For five days after Hurricane Ida tore through New Orleans and left the city in darkness, 86-year-old Eddie Gentry sat in his sweltering, eighth-floor apartment, fearing that he was running out of breath.

Mr. Gentry opened his windows to get some breeze, but the two critical machines that help him breathe sat useless in his apartment because he lacked power. He thought about trying to get to the street and walk a few blocks to the French Quarter, where power was restored on Wednesday night, but the building’s elevators were not working and he doubted he could walk down eight flights carrying his oxygen tank and the nebulizer that delivers asthma medicine to his lungs.

“My breath was getting heavy, heavy, heavy,” Mr. Gentry recalled on Sunday. “I felt like my condition was going to kill me.”

On Saturday, the sixth day without power, Mr. Gentry and hundreds of his neighbors were rescued by workers with the New Orleans Health Department, which evacuated residents of eight apartment buildings for older people that it said were unsafe.

a warehouse that appeared to lack basic sanitation.

More than 100,000 electric customers in New Orleans — about half of the city’s total customers — were still without power on Sunday. Entergy, which provides electricity to New Orleans, said it planned to restore service to most of the city by Wednesday, and utility workers could be seen pulling branches from downed power lines in a mad dash to turn the lights back on.

But forecasters warned that New Orleans and other parts of Louisiana could feel as hot as 105 degrees on Sunday, a level deemed “dangerous” by the National Weather Service. And without air-conditioners or fans, many residents were feeling the heat.

Outside the city’s convention center on Sunday, medical vans and buses chartered by the state were lined up, waiting to take evacuees to state-run shelters hours away. The city began assisting with evacuations on Friday, and on Saturday, the vast majority of the nearly 600 people who had been bused out of the city were residents of the apartment complexes deemed unfit.

The program to evacuate them began after desperate pleas from residents and their families for officials to do something about the deteriorating conditions in the apartment complexes for older residents.

“It has been extremely disappointing to see how these privately run and privately owned and privately operated facilities are allowing these kinds of conditions to unfold,” said David Morris, who is part of Resilient Nola, a city agency, and was helping to run the evacuations.

It was unclear why the city had not coordinated evacuation trips until several days after all of the city’s power was knocked out by the storm. Mr. Morris acknowledged that residents’ warnings about the poor conditions of some apartments had made the city “press on the gas” to start the program, but said it was important that the city knew the timeline for power restoration before deciding to bus people out of town.

Once the evacuation buses began running, a range of residents found it useful.

Johnnica Palmore waited in a hall of the convention center on Sunday morning with her two children, ages 11 and 2, to board a bus bound for a shelter that has electricity. She had spent the first few days after the storm at the nursing home, where she works as a nursing assistant. But when she finally returned to her family’s home after the facility’s generator stopped working, she found that the roof of her daughter’s room had caved in.

“Hopefully it’s safe where we’re going,” said Ms. Palmore, 36, who said she was apprehensive about getting on a bus to a shelter far away, even if it seemed to be her only option.

A city spokesman said the state does not tell the city which shelters residents will be taken to until they begin boarding a bus, meaning those fleeing must decide to leave without knowing their destination.

Another hall of the convention center was converted into a 250-bed medical shelter for people who faced health challenges without power, such as those requiring oxygen or insulin. There were 17 patients at the shelter by Sunday morning, and officials said 11 more were on the way. Some had come from their homes, and others were being transferred from hospitals that were already overwhelmed with Covid-19 patients.

On Sunday, Mr. Gentry, who had been rescued from his eighth-floor apartment, said he was feeling much better as he waited in line for lunch in Shreveport, where the bus had taken him. “I knew I had to get out of there,” he said of the days he spent stuck in his unit.

The deaths and the reports of poor conditions at the Catholic-run buildings surprised many in New Orleans, where Catholicism is both the dominant religion and embedded in the city’s culture. It is the framework for holidays like Mardi Gras and St. Joseph’s Day, a widely celebrated feast day in March.

Generations of low-income seniors have been cared for by the Catholic Church’s homes, and the number of those apartments grew to nearly 1,100 citywide after Hurricane Katrina displaced many residents in 2005.

GREENVILLE, N.C.--(BUSINESS WIRE)--Employers aiming to win the war on talent have a new “A” team to tap into: college and professional athletes. … END_OF_DOCUMENT_TOKEN_TO_BE_REPLACED

Mortgage rates are likely to rise in July, extending a seven-month streak. High inflation, and the Federal Reserve's efforts to control it, have … END_OF_DOCUMENT_TOKEN_TO_BE_REPLACED