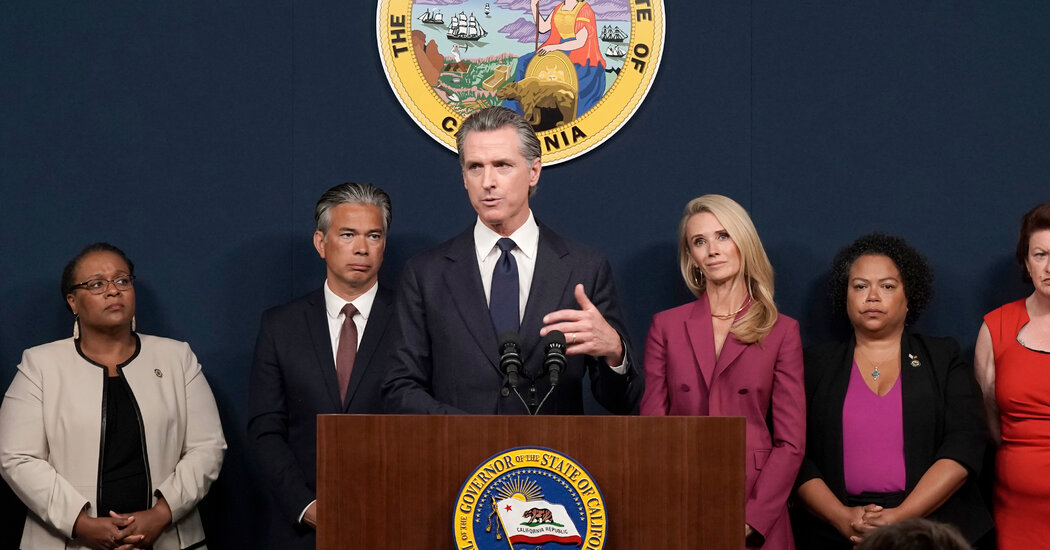 SACRAMENTO — Widening his attack on Republican states for their positions on guns, civil rights and abortion, Gov. Gavin Newsom of California on Wednesday called on Hollywood to “walk the walk” on liberal values by bringing back their film and television productions from states such as Georgia and Oklahoma.

Mr. Newsom issued the challenge through an ad in Variety that asked the state’s left-leaning creative community to “take stock of your values — and those of your employees — when doing business in those states.”

The Democratic governor on Wednesday simultaneously endorsed a legislative proposal that would provide a $1.65 billion, five-year extension of California’s film and television production tax credit program.

took the opportunity to rebuke Gov. Greg Abbott of Texas for previously enabling its residents to sue abortion providers.

announced that film and television productions generated $4.4 billion in the state this fiscal year, a new record. “Spider-Man: No Way Home” was filmed in the state, the governor noted, as was the fourth season of “Stranger Things.”

thick of that power struggle for months, trolling Mr. DeSantis on Twitter and inviting Disney to rethink its Florida investments. The Variety ad was the latest in a series of initiatives by Mr. Newsom to take his defense of “California values” onto a national stage.

A $105,000 spot that ran in Florida last month — attacking Mr. DeSantis and inviting Florida businesses to come to California — was the opening salvo in a national effort by Mr. Newsom that has included newspaper ads in Texas attacking Mr. Abbott on abortion restrictions and a highly publicized trip to Washington, D.C., to discuss, among other things, gun legislation.

film production incentives during the pandemic, has banned nearly all abortions since the Roe v. Wade reversal. And Georgia, which has one of the nation’s most generous packages of film production incentives, has granted fetuses full legal recognition. This week, a Georgia tax agency found that pregnant women could take a $3,000 personal tax exemption for any fetus with a detectable heartbeat.

Mr. Newsom noted that California’s abortion rights are among the most secure in the nation. The state has also enacted some of the nation’s toughest laws on gun safety and civil liberties for L.G.B.T.Q. people.

California’s film tax credit — which the state created in 2009 after productions began decamping for Canada — has been of debatable value, even with an expansion and overhaul in 2014. The incentive allows filmmakers to recoup as much as 25 percent of their spending — up to the first $100 million — on crew salaries and other costs, excluding star salaries. But other states, including Georgia, offer more significant rebates.

Critics complain that the tax credit encourages bidding wars and rarely keeps productions in the state over the long term. A 2019 analysis by the state’s nonpartisan Legislative Analyst’s Office found that one-third of the projects that received the subsidies probably would have been made in California regardless.

“While the credit probably caused some film and television projects to be made here, many other similar projects also were made here without receiving any financial incentive,” the report said.

another study, conducted this year for the Motion Picture Association by the Los Angeles County Economic Development Corp., that concluded that California’s program had helped create more than 110,000 jobs and tens of billions of dollars in economic output. In recent years, the tax credit has also helped bring shows such as “American Horror Story,” “Veep” and “Lucifer” back from other states and countries to California.

There were no arrests in three quarters of last year’s fatal shootings, according to statistics provided by Mr. Krasner’s office, even as arrests for … END_OF_DOCUMENT_TOKEN_TO_BE_REPLACED