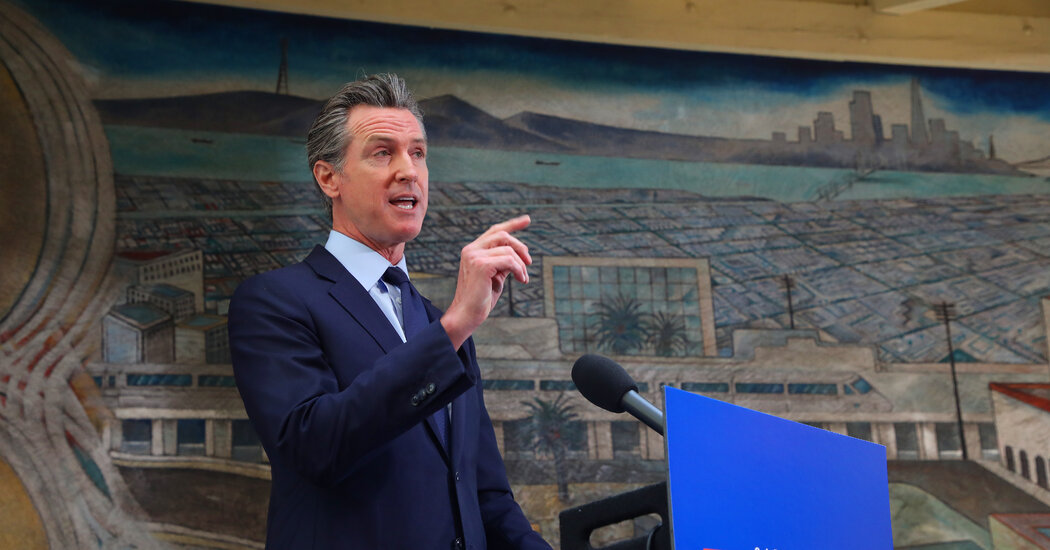 SACRAMENTO — Riding a breathtaking and exquisitely timed $75.7 billion surplus, Gov. Gavin Newsom on Monday proposed putting $600 in the pockets of two-thirds of California taxpayers in a state rebate that if approved would be the largest in U.S. history.

The proposal, one in a series the governor plans to make this week in his annual budget revision, takes advantage of a remarkable turnaround in the state’s financial picture that comes not only as California emerges from the coronavirus pandemic, but also as Mr. Newsom works to defuse an expected recall election.

Other plans for the windfall — all requiring legislative approval — include aid to low-income Californians who are behind on their utility bills and rental payments, expanded child care subsidies, drought and wildfire mitigation and more.

In less than a year, the state’s financial picture has swung from bust to boom, thanks largely to California’s tax system, which relies heavily on the kind of higher-income workers who were able to work from home and thus keep their jobs during the pandemic.

The state cashed in not only on income taxes but on taxes on capital gains from the booming stock market as investments made affluent Californians wealthier and as a number of California-based start-ups went public.

That rebound, along with a $26 billion infusion of federal stimulus money, sent the state budget soaring even though a year ago at this time, California was projecting a $54 billion shortfall. Even after fulfilling legal obligations to fund public schools, pay down debt and put money into the state’s rainy day fund, the leftover discretionary surplus is still more than twice as large as earlier estimates.

“California is not just back — California is roaring back,” Mr. Newsom, a Democrat, said on Monday in a news conference in Oakland, where he appeared with the chairs of the state budget committees and ignored questions about the recall.

His rebate plan would send state stimulus checks of at least $600 to about 11 million middle-class taxpayers with adjusted gross incomes of less than $75,000, with an extra $500 to those with dependent children; the income threshold and benefit would be halved for married couples filing separately. The proposal would cover eligible taxpayers, regardless of immigration status, who did not get a $600 state stimulus check under an earlier program that targeted more than four million low-income Californians.

The rebate checks, totaling nearly $11 billion, would return money to two in three of the state’s tax filers, according to Mr. Newsom. And they are sure to please voters as challengers gear up their campaigns to replace Mr. Newsom in the unlikely event that the state’s heavily Democratic electorate decides to recall him.

While many states, including California, initially were predicting that the pandemic would be catastrophic for budgets, many of those projections have become less dire in recent months. A report by the National Conference of State Legislatures found that more than 30 states have revised their revenue forecasts upward from the start of the pandemic, allowing some to revisit cuts they previously made.

A handful, including Idaho, have proposed their own form of stimulus or tax relief, but none approximating the scope and scale of Mr. Newsom’s plan. Still, experts emphasized that many states — particularly those that rely heavily on tourism and sales tax revenue, like Hawaii and Nevada — have struggled financially.

“The inequality of the pain in the current downturn is striking,” said Richard Auxier, a researcher with the Tax Policy Center.

AUSTIN, Texas--(BUSINESS WIRE)--As the first multifamily management company to be recognized in the Public Relations and Marketing Excellence Awards, … END_OF_DOCUMENT_TOKEN_TO_BE_REPLACED

There have been whispers of cooling housing and rental prices in the San Francisco Bay Area, but that hasn't yet translated into practical, noticeable … END_OF_DOCUMENT_TOKEN_TO_BE_REPLACED

Cars pass in Independence Square at twilight in Kyiv, Ukraine, Monday, Oct. 31, 2022. Rolling ... [+] blackouts are increasing across Ukraine as the … END_OF_DOCUMENT_TOKEN_TO_BE_REPLACED