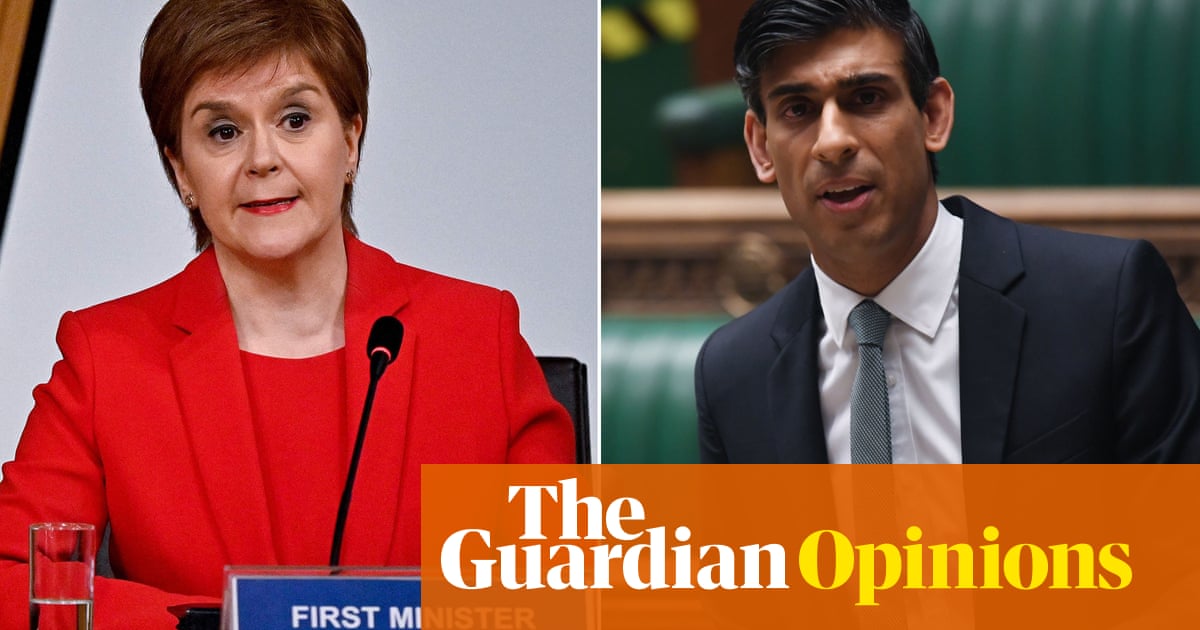 Nevertheless, it is hard to fully understand them without understanding the gravitational pull that each exerted on the other.

To be sure, Sunak’s budget did not overtly concern itself with the SNP’s internal travails in any way. The chancellor’s package was focused on economic recovery from the battering by the pandemic, supporting jobs, maintaining welfare support, paying for the borrowing, and investing in new priorities, plus all the inequality issues that cluster under the phrase “levelling up”. If all this also helped to cement Sunak’s position as the Conservative party’s heir apparent, then that was a barely veiled subtext too.

By corollary, Sturgeon’s evidence to the Scottish parliament’s harassment complaints handling inquiry in Holyrood’s Robert Burns Room was not primarily part of her long campaign, much boosted by Covid, to marginalise the claims of the UK government in Scotland. Sturgeon’s exclusive focus – and the committee’s – was on how she responded to the serious complaints against her predecessor, Alex Salmond. As with his own evidence last week, the issues were granular, local and personal. Sturgeon’s was as formidable a performance as his had been, but the political fallout has yet to settle.

Yet in politics, all kinds of things connect. The Conservatives in London and the nationalists in Edinburgh are not in wholly separate orbits. Instead, they are warily circling one another in a defining struggle. Each is sleeplessly aware of the other, even if Boris Johnson and his ministers were late to catch up. Both Johnson and Sturgeon know that today’s big set pieces will shape the way the larger conflict between them is resolved.

These deeper political connections need to be appreciated. At their most basic, both Sunak’s budget and Sturgeon’s evidence will affect the continuing arguments across these islands about the kind of countries we want to live in. Sturgeon’s nationalists have been obsessed with their particular version of this issue – separation from the UK – for years. The government in which Sunak serves has been less strategically disciplined and is more unplanned in its approach. Governing often seems little more than what the Tory party thinks it exists to do.

This budget, though, revealed something different and more thought-out on the UK side. There was a real attempt to look beyond the chaotic pragmatism of ministers’ own handling of the pandemic, and embed some longer-term political goals – many of them concerned with trying to bind Scotland into the UK. Maintaining the union is now close to the top of the Johnson government’s agenda, and Sunak is an ever-present in the tightly knit group shaping its strategy.

No one who has covered budgets down the years could miss the special place that Sunak gave to “the UK as a whole” several times in his speech, or the particular focus on Scotland. The accompanying budget documents do not normally give Scotland, Wales and Northern Ireland this degree of sustained attention, either. This time, Sunak was scrupulous in ensuring many references to “UK-wide” schemes and initiatives, as well as announcing a clutch of measures aimed at specific parts of Scotland, including Aberdeen, Falkirk, Argyll and Sturgeon’s own native Ayrshire. There was even government backing for a 2030 UK and Ireland World Cup bid.

The intention is clear. Sunak wants to deploy the financial heft of the Treasury to reinstate the UK in the heart of Scotland’s economic and political conversation. This absence has long frustrated UK ministers, who feel that the Treasury’s deep pockets during the pandemic have been deceitfully ignored in Sturgeon’s successful presentation of herself as Scotland’s national crisis manager. Ministers also complain that every UK grant to the Scottish government under the Barnett formula is always banked, sat on in Edinburgh by Sturgeon and her ministers, and then rebranded as exclusively Scottish government spending without any acknowledgment of where it comes from.

Overturning that reality will require more than one speech by the chancellor, and subtler strategies than merely sticking a union jack on every press release. But there is no missing the ambition in what Sunak announced, or the potential importance of the attempt, or that it comes a mere nine weeks before Scots go to the polls to elect a new parliament.

The link between today’s Westminster and Holyrood events is umbilical. Sturgeon is essential to the SNP’s electoral chances in May and to the prospects of an independence vote. Whether she survives or falls is pivotal.

No one else can summon the command or credibility she brings. The nationalists may need plenty of both if they are to see off the renewed advances towards Scotland’s voters that Sunak has unveiled.

The poshest place in California's Coachella Valley is The Madison Club. This exclusive gated community in La Quinta is where A-listers and tycoons … END_OF_DOCUMENT_TOKEN_TO_BE_REPLACED

KOROPY, Ukraine — Four men tugged at long strips of fabric to lift a coffin out of the gaping hole in the backyard of a small house. They flung the … END_OF_DOCUMENT_TOKEN_TO_BE_REPLACED