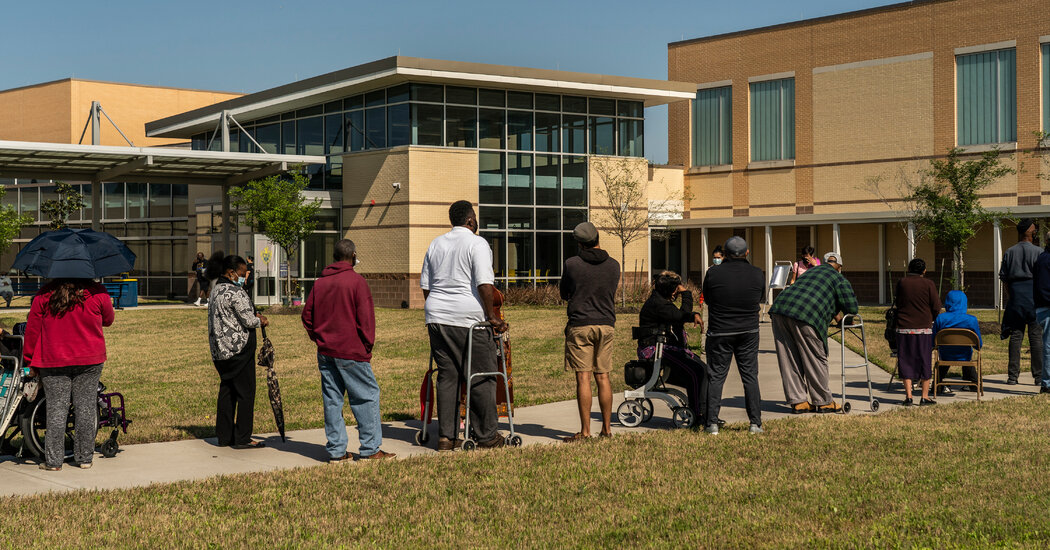 HOUSTON — As Texas joined several other states on Monday in opening eligibility for coronavirus vaccines to millions of healthy adults, anticipation for the shot could be seen in the long line that snaked outside Booker T. Washington High School in Houston.

“This is a good sign,” said Nelson Garcia, 48, who waited more than two hours with his two young children before he was finally within reach of protection from a disease that could be deadly for people with diabetes like himself. “It looks like everyone wants to get vaccinated. I want my children to see that this is a good thing and that the vaccine may finally help us get back to normal.”

On Monday, Texas became the largest state to expand vaccination eligibility to anyone 16 or older, or about 22 million people. Long lines were replicated across the state and appointments were difficult to snag online. Vaccination spots at HEB.com, the website for the most popular supermarket chain in Texas, were few and far between.

The spike was expected. “Virtually anyone can get a vaccine now,” said Representative Sheila Jackson Lee, a Democrat who represents the Houston region.

the Rio Grande Valley, where a combination of poverty, lack of access to health care and a close-knit culture accelerated the spread of the virus over the summer, vaccination sites were a little bit quieter. A majority of residents in Hidalgo County, home to McAllen, had gotten a vaccine by late March, officials said. More than half of its residents qualified because they tend to suffer from chronic pre-existing ailments such as diabetes, obesity and high blood pressure, said Dr. Ivan Melendez, the county health authority.

Nearly 300,000 people in the region had received their first dose of the vaccine as of Monday, and about 22,000 people were expected to do so in the coming weeks. “I am encouraged,” Dr. Melendez said. “Do we have a long way to go? Absolutely. But we have come a long way.”

Calls for Monday’s appointments in Louisiana began three weeks ago, after Gov. John Bel Edwards announced the state’s expansion of eligibility beyond those with underlying health conditions. But Ruston Henry, a pharmacist in New Orleans, noted that his customer base had grown only slightly younger. “We’re seeing old to middle-aged people,” he said. “We’re not seeing many people who are ages 16 to 20.”

As of Thursday, about 15 percent of Louisianans, or about nearly 721,000, had been fully vaccinated, while more than 1.1 million have received at least one dose, officials said.

In Ohio, the demand for vaccines has been palpable, with appointments filling up quickly and some people putting their names on more than one waiting list. In Franklin County, appointments for the entire week were filled within two hours of being made available. Tan Thai, who works at the Old Village Pharmacy in Columbus, said appointments for her most recent batch of vaccines were snapped up in 10 minutes.

“People are so desperate right now,” Ms. Thai said. “They are looking everywhere.”

Dr. Varon, who has witnessed firsthand the devastation brought by the pandemic in the Houston area, said widespread vaccination efforts did not arrive soon enough. More than 48,000 people have died from Covid-19 in Texas, and he fears a surge after spring break and Easter.

“We are expecting a fourth wave,” he said. “It’s going to happen. Things are not going to be good over the next few weeks.”

He cautioned people from letting their guard down until a majority of the population has been fully vaccinated and herd immunity is reached, a number that would assure that medical systems are not overwhelmed with patients. “We are not even close,” he said of the vaccination rates.

He especially urged communities of color — some of which have shown apprehension to sign up for a virus vaccine — to listen to their doctors and public officials and go to the nearest site. “I tell you, please, the vaccines are safe,” Dr. Varon said. “Get vaccinated. This is your only chance to survive this pandemic.”

Reporting was contributed by A. Colleen DeGuzman from McAllen, Texas, Marina Trahan Martinez from Dallas, Katy Reckdahl from New Orleans, and Lucia Walinchus from Columbus, Ohio.

DONETSK REGION, Ukraine — Between the cracks of mortar fire and the metallic bangs of Russian self-detonating mines, Yurii, a Ukrainian Army medic, … END_OF_DOCUMENT_TOKEN_TO_BE_REPLACED

SAN FRANCISCO — Cleve Jones has lived in the Castro neighborhood for nearly 50 years, almost from the day he graduated from high school in Phoenix and … END_OF_DOCUMENT_TOKEN_TO_BE_REPLACED