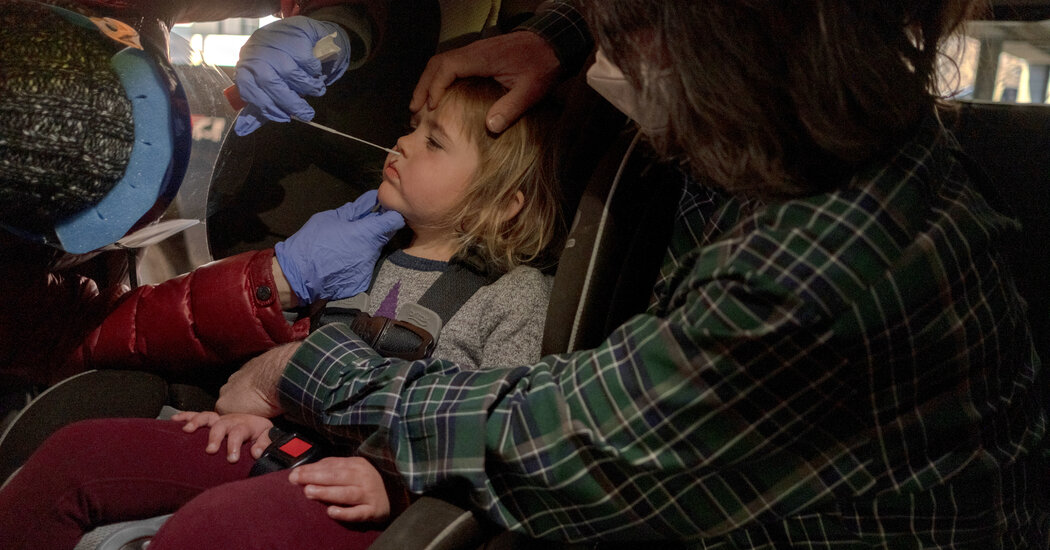 HOUSTON — Twice last year, Margaret Schulte and her husband, Jason Abercrombie, traveled 11 hours round-trip to Louisiana from their home in Tulsa, Okla., in the hopes of vaccinating their children, who were 2 and 4, against the coronavirus.

The only way they could get shots for their children — among the more than 19 million Americans under 5 years old who are not yet eligible for vaccinations — was to take part in a clinical trial. So they signed up, hoping a successful vaccine would mean that by now, or at least sometime very soon, a semblance of prepandemic life would be on the horizon.

It has not worked out that way.

The Pfizer trial that their children participated in did not produce promising results, the company said last month. Nor have vaccines emerged from other corners. Moderna has yet to release results of its pediatric trials.

Now Ms. Schulte and Mr. Abercrombie are among the millions of parents stuck in an excruciating limbo during a surge of Omicron cases, forced to wrestle with day care closures and child care crises as the rest of the world appears eager to move on.

according to research from the University of California, Berkeley.

under 20 percent — among the youngest eligible group, children who are 5 to 11 years old.

Young children are at much less risk of becoming severely ill after a coronavirus infection when compared with adults, doctors have said. While hospitalizations have gone up for children, the overall numbers remain very low.

In Austin, Texas, Kyle and Tasha Countryman count themselves among the lucky: They both have jobs that are busier than ever — in construction and furniture sales — and the day care where they send their children, who are 1 and 2, has closed certain classes only a couple of times during the pandemic.

They were very cautious while Ms. Countryman, 36, was pregnant. “None of us wanted to get sick before I delivered,” she said. Now, she said, her goal is to give the children as normal a life as possible. That means seeing family, friends and cousins and going out to places where masks are not required.

“We do that so our kids can see other kids’ faces,” Ms. Countryman said. “I don’t want to go to some of these indoor places if it’s going to be very, ‘Stand here and everybody wear masks.’ Those are not the places that we’re actively seeking out to spend our time. We’re going to more restaurants, breweries, activities that we can do outside.”

She said that she and her husband would not feel comfortable getting a coronavirus vaccine for their children right away, and would want to make sure that any risk of side effects did not outweigh the benefits.

For Ms. Schulte, whose two young children participated in the Pfizer vaccine trial, the promise of a new vaccine has given way to more waiting.

“They’ve already told us that we’ll need to come back for a third dose because it didn’t generate enough of an immune response,” she said.

“We had hoped that by now we would learn that one of our children was fully vaccinated and we could move on,” she said. “It would have been nice, but a trial is a trial.”

A Falcon 9 rocket launches the GPS III SV05 satellite on a mission for the U.S. Space Force on June 17, 2021.SpaceXElon Musk's SpaceX broke its own … END_OF_DOCUMENT_TOKEN_TO_BE_REPLACED

The "Dog Whisperer" is also a real estate whiz.Canine trainer Cesar Millan has quickly found a buyer for his $4 million Encino, CA, residence. The … END_OF_DOCUMENT_TOKEN_TO_BE_REPLACED