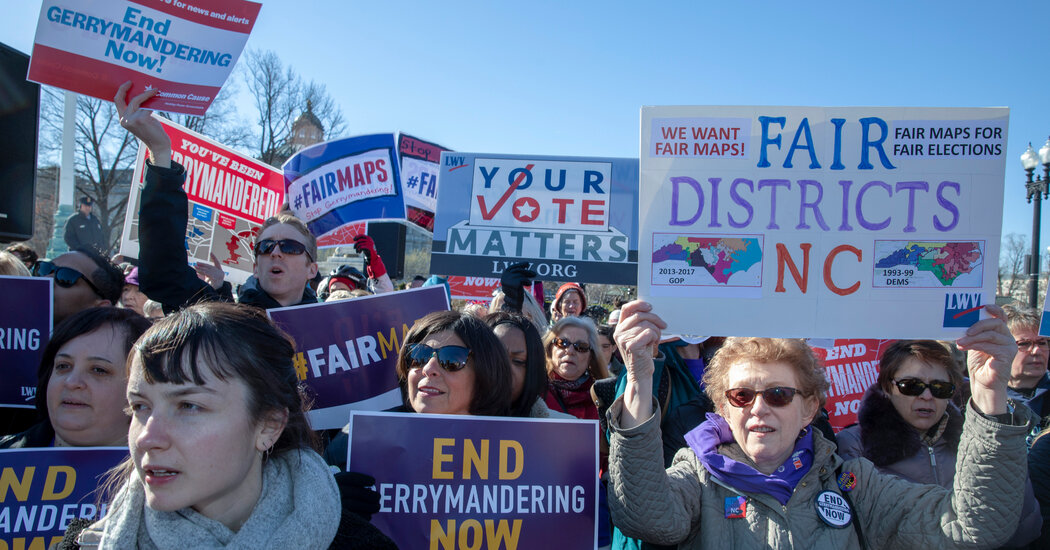 The North Carolina Supreme Court on Friday upended Republican efforts to lock in political dominance in the state, saying that congressional and state legislative maps were partisan gerrymanders that violated the State Constitution.

The ruling requires the Republican-controlled legislature not only to submit new maps to the court, but to offer a range of statistical analyses to show “a significant likelihood that the districting plan will give the voters of all political parties substantially equal opportunity to translate votes into seats” in elections.

The requirement rebuffed the argument against redrawing the maps that the legislature offered in oral arguments before the court this week: that the court had no right to say whether and when political maps cross the line from acceptable partisanship into unfairness.

The justices’ 4-3 decision, split along party lines, not only sets a precedent for judging the legality of future maps in the state, but could play an important role in the struggle for control of the House of Representatives in elections this November. The Republican-drawn maps had effectively allotted the party control of at least 10 of the 14 House seats the state will have in the next Congress, even though voters statewide are roughly equally divided between the two parties.

to end decades of federal debate over the constitutionality of partisan gerrymanders, ruling in 2019 that they were political issues beyond its jurisdiction. The justices said then that Congress and state courts should rule on the question, and lawyers for the plaintiffs in the case said on Friday that the new ruling carried out that mandate to the letter.

“The U.S. Supreme Court said it’s up to state courts to rein in partisan gerrymandering, and that’s exactly what the North Carolina Supreme Court has done,” said Elisabeth Theodore of the law firm Arnold & Porter. “The court’s direction is clear: The General Assembly must stop cheating and draw fair new maps so that North Carolinians can have a fair say in who governs them.”

The decision comes as both federal and state courts have lately proved a bulwark against some excessive gerrymanders. A state court in Ohio rejected maps drawn by Republicans in the state legislature last month as unconstitutional partisan gerrymanders, and a federal court in Alabama ruled last month that Republicans had to redraw their congressional map to create a second district that gave minorities a fair shot at electing their preferred candidate.

The legal decisions have been a boon for Democrats, who started the latest redistricting cycle at a significant disadvantage. Republicans controlled the map-drawing process in 187 congressional districts, while Democrats were able to draw 75 districts.

The court decisions in North Carolina, Ohio and Alabama all forced Republicans back to the drawing table and are likely to result in either more competitive seats or opportunities for Democrats in the midterm elections.

an important victory in 2018, striking down Republican-drawn maps that the justices said violated the State Constitution.

What is redistricting? It’s the redrawing of the boundaries of congressional and state legislative districts. It happens every 10 years, after the census, to reflect changes in population.

In the North Carolina case, a lower court said last month that even though the state and congressional maps were extreme partisan gerrymanders by any measure, the State Constitution nevertheless did not outlaw them.

But the State Supreme Court built on the Pennsylvania ruling in its opinion on Friday, saying the maps violated “beyond a reasonable doubt” the state’s guarantees of free speech, free assembly, free elections and equal protection under the law.

“The General Assembly violates the North Carolina Constitution when it deprives a voter of his or her right to substantially equal voting power on the basis of partisan affiliation,” the ruling stated. A political map that “diminishes or dilutes a voter’s opportunity to aggregate with like-minded voters,” the justices said, “unconstitutionally infringes on that voter’s fundamental right to vote.”

But although the ruling cited “multiple reliable ways” of deciding when a gerrymandered map has crossed the line into unacceptable partisanship, it did not satisfy the legislators’ demand for a bright line showing when that line was crossed. Instead, it stated that a political map would be presumed constitutional if “some combination of these metrics demonstrates there is a significant likelihood that the districting plan will give the voters of all political parties substantially equal opportunity” to elect candidates.

Republicans on the court, led by Chief Justice Paul Newby, argued that was dodging the question. By giving the court political powers that only the state legislature or voters could exercise, he wrote, the majority on the court “tosses judicial restraint aside, seizing this opportunity to advance its agenda.”

AUSTIN, Texas--(BUSINESS WIRE)--As the first multifamily management company to be recognized in the Public Relations and Marketing Excellence Awards, … END_OF_DOCUMENT_TOKEN_TO_BE_REPLACED

There have been whispers of cooling housing and rental prices in the San Francisco Bay Area, but that hasn't yet translated into practical, noticeable … END_OF_DOCUMENT_TOKEN_TO_BE_REPLACED

Cars pass in Independence Square at twilight in Kyiv, Ukraine, Monday, Oct. 31, 2022. Rolling ... [+] blackouts are increasing across Ukraine as the … END_OF_DOCUMENT_TOKEN_TO_BE_REPLACED