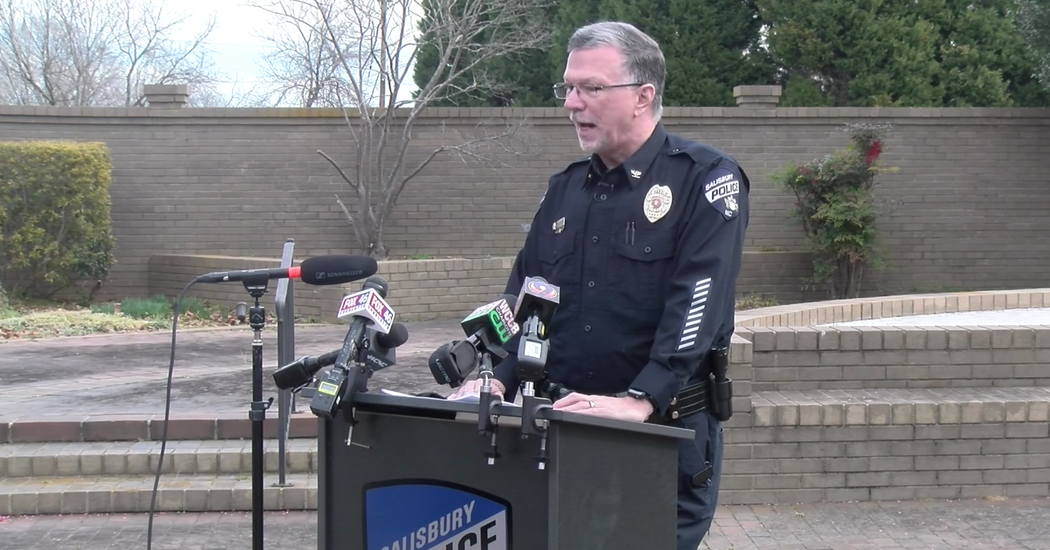 A police department in North Carolina has ordered an investigation into a video that appeared to show an officer lifting a police dog off the ground by its leash during a training exercise and slamming the dog into the side of a patrol car.

Chief Jerry Stokes of the Salisbury Police Department declined to comment in detail on the episode at a news conference on Tuesday, saying it was “an ongoing personnel matter.” He said that the dog had been separated from the officer shown in the video and that an investigation was underway.

The 4-year-old German shepherd, whose name is Zuul, was present at the news conference. “You can see him here today,” Chief Stokes said. “He’s healthy and doing well and will be in service as normal in the near future.”

“The canine was not harmed and is healthy and being well cared for,” he said.

Chief Stokes did not take questions from reporters.

was published by WJZY-TV of Charlotte, N.C. The station said it had been submitted by an anonymous source.

It was not clear when the video was recorded. The chief did not release the name of the officer shown in the video or disclose how the department became aware of the episode.

A city spokeswoman, Linda McElroy, said on Thursday that she could not comment further because it was a personnel matter, citing North Carolina law.

In the video, an officer can be seen getting out of a police S.U.V. as a helicopter buzzes overhead, leaving the back door of the car open. The police dog leaps from the vehicle and tries to follow the officer, but immediately lies down when the officer yells at him.

The officer then walks toward the dog and wrestles him into a leash. He then uses the leash to hoist him off the ground and sling him over his back before walking toward the car.

The officer slams the dog against the side of the vehicle — a thud is heard — before pushing him inside. He yells “Stay!” before raising his hand and striking the dog.

“Is your camera on?” a second off-camera voice asks.

“Ah, no, my power’s off,” the person who appears to be recording says.

Chief Stokes said at the news conference that the department’s dogs are trained to be used against criminal suspects, and that officers must have complete control over the dogs at all times.

“When a canine is noncompliant with the handler’s commands, the handler is trained to correct the dog,” he said. “Canine training tactics and corrective measures can sometimes be alarming out of context. S.P.D. cannot and will not comment about whether the training tactics used in the video were appropriate, because that is still being reviewed.”

Salisbury is about 45 miles northeast of Charlotte. The Police Department has five dogs and five handlers, Ms. McElroy said.

Chief Stokes said the investigation would include former police dog handlers from other departments, an owner of a police canine training firm and members of the Salisbury department’s K-9 supervisory staff.

Chief Covelli said Mr. Crimo planned the shooting for several weeks, but that the authorities had not yet established what his motive was. “We have no … END_OF_DOCUMENT_TOKEN_TO_BE_REPLACED

Kevin McKenzie and Martine van Hamel were standing in the dining room of their weekend house in Woodstock, N.Y., trying to figure out when they got … END_OF_DOCUMENT_TOKEN_TO_BE_REPLACED