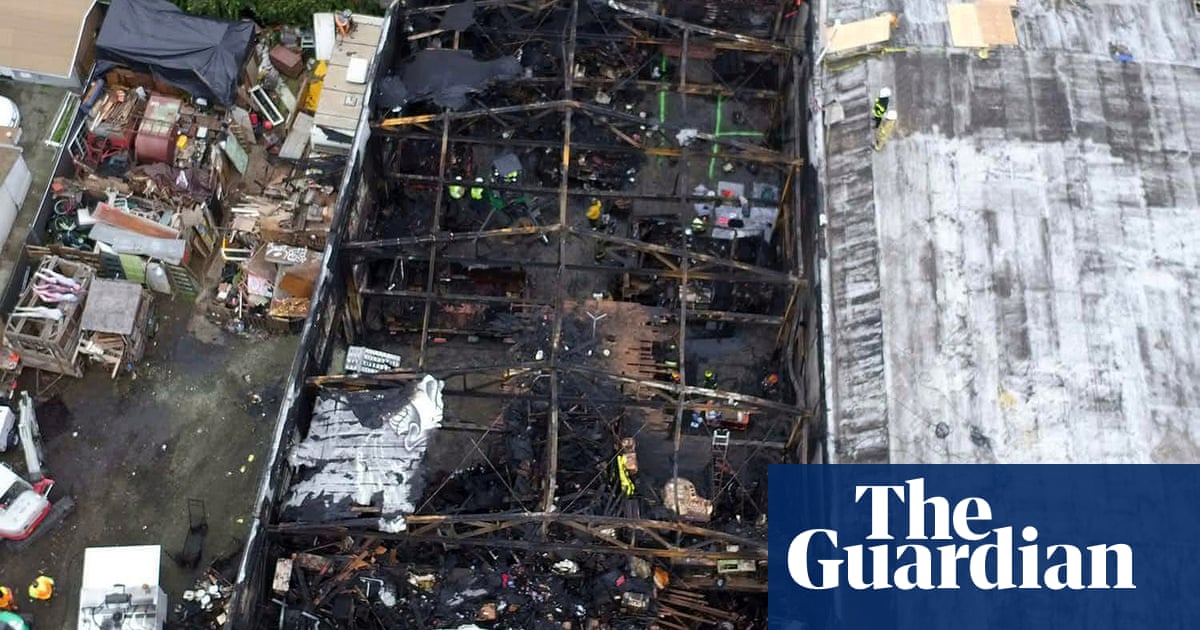 The master tenant of the Oakland Ghost Ship warehouse, where a fire killed 36 people in 2016, received a 12-year sentence – but he is not likely to see the inside of a state prison.

Already on house arrest after being released from jail last year because of coronavirus concerns, Derick Almena, 50, on Monday was ordered to serve the rest of his term under electronic monitoring, followed by three years of probation.

“I know that no family member will find this in any way acceptable, and I accept that responsibility,” Trina Thompson, a judge on the Alameda county superior court, said.

She added: “I wish I could in the stroke of a pen take away your deep loss and your sadness.”

The sentence marked an end to an emotionally charged case that devastated the local underground arts and music community. The 2 December 2016 Ghost Ship inferno, one of the deadliest structure fires in US history, brought into focus the harsh reality of the Bay Area’s housing crisis, and the hazardous conditions it was forcing local artists to accept in order to continue living and working.

Almena, who lived in the warehouse with his family, was accused of ignoring fire codes and warnings that the space was hazardous when he illegally converted it into commune-style living quarters. He filled the building with Balinese statues, antiques, discarded material and wooden pallets, racking up a history of violations and complaints. Almena often hosted for-profit concerts at the commune, even though it was not licensed for entertainment.

The night of the blaze, prosecutors alleged Almena knowingly packed dozens of people into a “fire trap” for an electronic music party, trapping victims on an illegally constructed second floor. Prosecutors said the victims got no warning and had little chance to escape down the narrow, ramshackle staircase.

Many of the those who died that night came from the local community, including musicians, artists, students, teachers and photographers.

Many of the relatives of the 36 killed had urged the judge to reject the plea deal. Because he received credit for time already spent behind bars while awaiting trial and for good behavior, he will spend the next year and a half at home with an ankle monitor.

“This lenient, slap-on-the-wrist sentence is vastly inappropriate for the crimes Derick Almena committed,” the family of Sarah Hoda, a victim of the fire, said in a statement read to the court via teleconference. “Upholding the DA’s irresponsible plea recommendation would shortchange 36 victims and their families.”

Emilie Grandchamps, the mother of Alex Ghassan, another victim, said Almena along with the warehouse’s owners and city agencies that are supposed to enforce regulations should be held accountable.

“I often ask, ‘Why was my son given a death sentence for being in the wrong place and at the wrong time and those responsible for his and 35 others’ death are given a second chance at life?’ I want my son’s death not to go in vain,” she said.

The judge and prosecutors said they took into consideration the difficulties of trying the case again, given the challenges of selecting jurors and calling witnesses who could face traveling during a pandemic, and because Almena had admitted his guilt. Almena apologized to the victims and said he was “sick with shame”.

“My shame cannot stand as any defense against what I am responsible for. It is my fault, my terrible accumulation of error, that shaped and built a place so dangerous,” he said in a statement read to the court through his attorney, Tony Serra.

Almena became the object of ire in the wake of the fire after after he posted on Facebook, just hours after the flames broke out: “Everything I worked so hard for is gone. It’s as if I have awoken from a dream filled with opulence and hope … to be standing now in poverty of self worth.”

The post was later deleted. Past residents and artists later came forward to describe not only dangerous living conditions at the warehouse, but what they called Almena’s erratic, manipulative behavior.

The Oakland city council agreed last year to pay just over $33m to settle civil lawsuits filed on behalf of the victims. The settlements included $23.5m to families of 32 victims and $9.3m to a survivor who suffers from “severe, lifelong injuries.”.

Almena was also ordered to pay about $181,000 in restitution for funeral expenses and counseling. A restitution hearing will be held on 30 April.

MIAMI--(BUSINESS WIRE)--Intelli Smart Homes, the leading smart home technology company, has been recognized as one of America’s fastest-growing … END_OF_DOCUMENT_TOKEN_TO_BE_REPLACED

Customers outside a Walmart store in Torrance, California, US, on Sunday, May 15, 2022. Walmart Inc. is scheduled to release earnings figures on May … END_OF_DOCUMENT_TOKEN_TO_BE_REPLACED

The past few years have been brutal on homebuyers' budgets. Would-be buyers have been priced out of some of the most desirable neighborhoods thanks to … END_OF_DOCUMENT_TOKEN_TO_BE_REPLACED