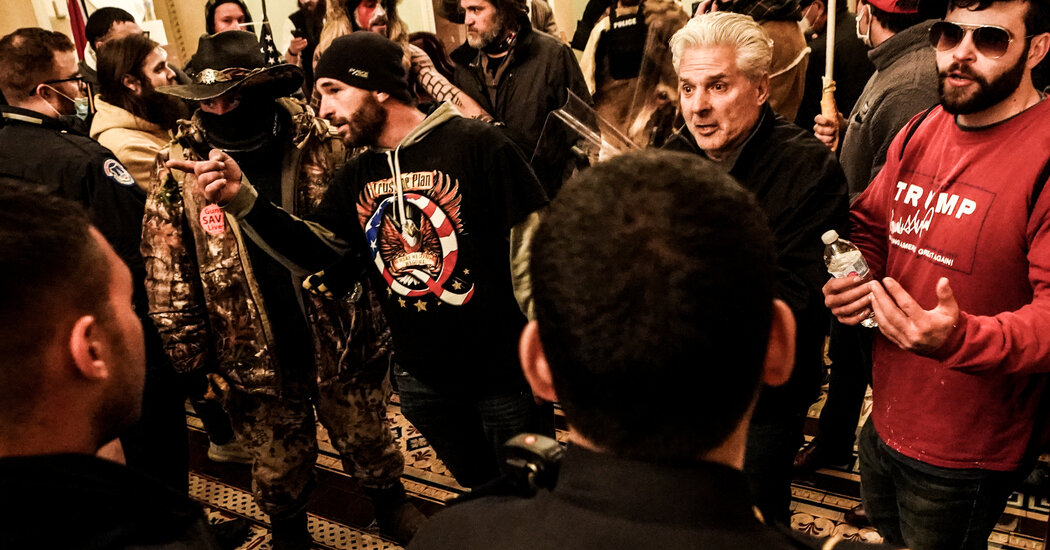 WASHINGTON — Pentagon officials placed “unusual” restrictions on the D.C. National Guard before the Capitol riot, its commander told senators on Wednesday, saying the military leaders’ fears of a repeat of aggressive tactics used during racial justice protests last year slowed decision-making and squandered time as the violence by a pro-Trump mob escalated.

Military and federal security officials detailed in a joint Senate committee hearing the additional security breakdowns that led to the failure to quell the mob attack on Jan. 6. Maj. Gen. William J. Walker, the D.C. National Guard commander, said he did not receive approval to mobilize troops until more than three hours after he had requested it.

The delay he outlined was longer than previously known and came to light in the latest hearing by lawmakers investigating the attack.

Days before the riot, the Pentagon had removed General Walker’s authority to quickly deploy his troops, he testified. He said he was unable to move troops even from one traffic stop to another without permission from Ryan D. McCarthy, the Army secretary. Once General Walker had approval for deployment, the Guard arrived at the Capitol only minutes later, at 5:20 p.m., and helped re-establish the security perimeter on the east side of the building.

“That number could have made a difference,” General Walker said of the possibility of deploying his troops earlier.

In response to questions from senators, General Walker said he believed that a double standard existed in the military decision-making, pointing out differences between the quick and aggressive tactics he was authorized to use during protests last spring and summer of police killings of Black men and the slower response to the violence of Trump supporters. He said military officials had expressed concerns about the optics of sending troops into the Capitol to subdue Americans.

“The Army senior leaders did not think it looked good” and did not think “it would be a good optic,” General Walker said. “The word I kept hearing was the ‘optics’ of it.”

When asked whether a similar debate had played out last year, General Walker said no.

devolved into violence. He said he had received a “frantic call” at 1:49 p.m. from Steven A. Sund, then the chief of the Capitol Police, about half an hour before rioters breached the Capitol.

“Chief Sund, his voice cracking with emotion, indicated that there was a dire emergency at the Capitol,” General Walker testified. “He requested the immediate assistance of as many available National Guardsmen I could muster.”

blaming the other agencies, one another and at one point even a subordinate for the breakdowns that allowed hundreds of Trump supporters to storm the Capitol.

The officials testified that the F.B.I. and the intelligence community had failed to provide adequate warnings that rioters planned to seize the Capitol and that the Pentagon was too slow to authorize Guard troops to help overwhelmed police forces after the attack began.

rioters who are members of militias and extremist groups as part of their investigation. Ms. Sanborn testified that few of the 257 rioters arrested so far were being investigated by the F.B.I. before the attack.

“I can only recall from my memory one of the individuals that was under investigation prior,” she said.

The testimony came as the Capitol Police said they were increasing security this week on Capitol Hill, warning of “potential threats toward members of Congress or toward the Capitol complex.”

Testifying at a House hearing, Yogananda D. Pittman, the acting Capitol Police chief, told lawmakers that her agency had received “concerning” intelligence about possible threats against the Capitol for Thursday. But she said the information was law-enforcement sensitive and she would share it only in a closed briefing. She assured committee members that the police force would be ready.

Chief Pittman noted that threats against lawmakers were “through the roof,” rising almost 94 percent the first two months of this year over 2020.

After Jan. 6, the Capitol Police leadership is asking for almost $620 million in total spending, an increase of nearly 21 percent over current levels to pay for new equipment, training and an additional 212 officers for assignments such as a permanent backup force. Chief Pittman also told the lawmakers that she would be working with the architect of the Capitol to design more “physical hardening” of the building after it was overrun by the rioters.

An affordable center-chimney Colonial in Glastonbury, CT, is the oldest property to hit the market this week on Realtor.com®.Offered at a steep … END_OF_DOCUMENT_TOKEN_TO_BE_REPLACED

Nissan was one of the early pioneers of the electric car. The Leaf has now sold over 600,000 units worldwide since its launch in 2011 and is still … END_OF_DOCUMENT_TOKEN_TO_BE_REPLACED

RUDNE, Ukraine — Yurii Brukhal, an electrician by trade, didn’t have a very dangerous role when he volunteered for Ukraine’s territorial defense … END_OF_DOCUMENT_TOKEN_TO_BE_REPLACED