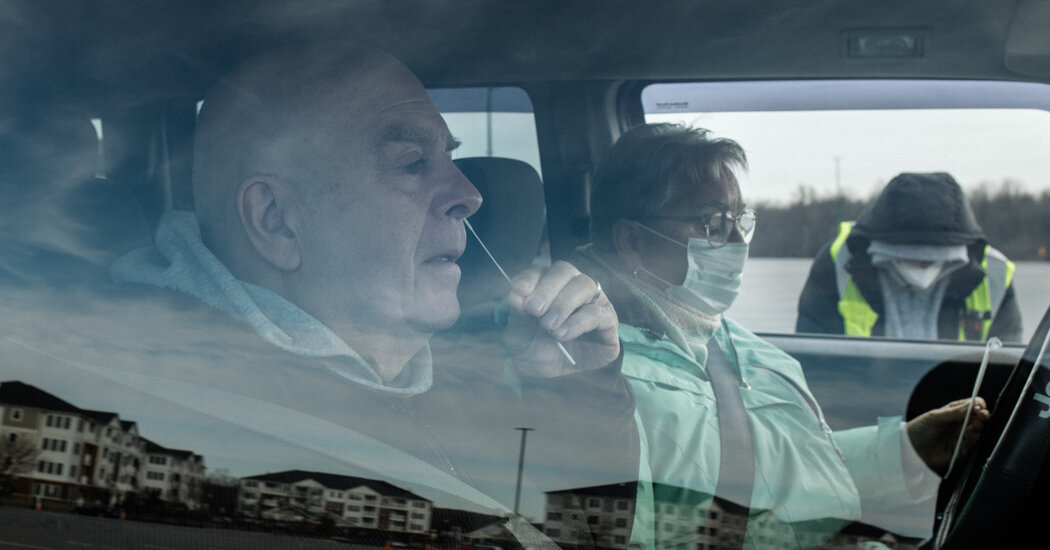 CHICAGO — New coronavirus cases have started to fall nationally, signaling that the Omicron-fueled spike that has infected tens of millions of Americans, packed hospitals and shattered records has finally begun to relent.

More and more states have passed a peak in new cases in recent days, as glimmers of progress have spread from a handful of eastern cities to much of the country. Through Friday, the country was averaging about 720,000 new cases a day, down from about 807,000 last week. New coronavirus hospital admissions have leveled off.

Even as hopeful data points emerge, the threat has by no means passed. The United States continues to identify far more infections a day than in any prior surge, and some states in the West, South and Great Plains are still seeing sharp increases. Many hospitals are full. And deaths continue to mount, with more than 2,100 announced most days.

But following a month of extraordinary rates of case growth, blocklong lines at testing centers and military deployments to bolster understaffed I.C.U.s, the declining new-case tallies offered a sense of relief to virus-weary Americans, especially in the Northeast and parts of the Upper Midwest, where the trends were most encouraging. After another round of masking up or hunkering down, some were considering what life might look like if conditions continued to improve.

cases in South Africa have fallen 85 percent from their mid-December peak, to about 3,500 cases a day from a high of 23,400, though they remain above the levels seen in the weeks before Omicron took hold.

Scientists said it remained an open question whether Omicron marked the transition of the coronavirus from a pandemic to a less-threatening endemic virus, or whether future surges or variants would introduce a new round of tumult.

“It’s important for people to not be like, ‘Oh, it’s over,’” said Aubree Gordon, an epidemiologist at the University of Michigan. “It’s not over until we get back down to a lull. We’re not there yet.”

In New York, cases are falling sharply even as deaths continue to increase, with more fatalities being announced each day than at any point since the first months of the pandemic. Around Cleveland and in Washington, D.C., fewer than half as many new infections are being announced each day as in early January. And in Illinois and Maryland, hospitalizations and cases have started to decline.

But the progress is not yet universal.

“As we’ve seen with Delta and previous surges, it comes in these peaks and waves, where one part of the U.S. gets hit and another part gets hit afterward,” said Syra Madad, an infectious-disease epidemiologist in New York City. “We are going to see that with Omicron. Even with a decline, it comes with a very long tail.”

In Kansas, where daily case rates have increased 50 percent in the past two weeks, Gov. Laura Kelly announced Friday that Veterans Affairs hospitals would be accepting patients not usually eligible for care there because other facilities were strained.

said at a news conference on Thursday.

But through nearly two years of the pandemic, the country has celebrated hopeful moments before, only to be disappointed by another wave: when the first surge in cases receded, when vaccines were authorized, when a “hot vax summer” seemed to be on the horizon.

“We need to be super vigilant about what is going on internationally,” said Judith Persichilli, the health commissioner in New Jersey, where case rates are falling quickly and where temporary morgues erected at the beginning of Omicron’s onslaught never had to be used. “Whatever is happening overseas eventually lands on our shores, and it lands first in New York and New Jersey.”

Some of the initial alarm about Omicron, which was first detected around Thanksgiving and quickly stormed across the globe, has lessened as research showed that the variant tends to cause less severe disease than prior forms of the virus. Vaccinated people, especially those who have received booster shots, are far less likely to have serious outcomes, though breakthrough infections are common. Data published on Friday from the Centers for Disease Control and Prevention showed that booster shots are 90 percent effective against hospitalization with Omicron.

Postal Service. Private insurers are now required to cover the cost of eight tests per person each month.

There has been no return to the stay-at-home orders imposed early in the pandemic, though new restrictions have emerged in some places. Some schools and colleges have transitioned to online instruction, either as a precaution or because of major outbreaks. School closures because of the virus peaked in early January, with millions of children affected by district shutdowns and classroom quarantines. Since then, disruptions have decreased, according to Burbio, a data-tracking company.

“The timing of this in a place like Cleveland has been bad,” said Marc R. Kotora, the owner of Gust Gallucci Co., a grocer and restaurant food provider that usually sees a big uptick in business around the holidays. “Because of the Omicron variant, we had lots of cancellations for people who wanted us to help cater their parties, and a number of restaurants we sell to closed up for a few weeks.”

In Chicago, where a vaccination mandate for indoor dining and some other activities took effect early this month, officials said they could lift that requirement in the coming months if conditions continued to improve. Cook County, which includes Chicago, is averaging about 8,000 cases a day, down from 12,000 earlier in the month.

“In June, my hope is that we will be in a good place,” said Dr. Allison Arwady, the city’s public health commissioner. “But could there be another variant? Where could we be? I can’t know for sure.”

In New Jersey, where new cases are down 60 percent over the last two weeks, hospitals have resumed more outpatient services and elective surgeries in recent days as the virus burden began to ease. Some facilities have also reclaimed areas that were set aside to accommodate beds for overflow Covid patients.

“Everybody has been so resilient,” said Melissa Zak, the chief nursing officer at Virtua Memorial and Virtua Willingboro, hospitals in southern New Jersey. “But I really worry how much this resiliency can last if it doesn’t continue to come down.”

Still, after two years of watching cases spike and ebb, and with scientists warning that the virus will become endemic, some people were careful not to be too optimistic about the latest data.

“Covid-19 seems to be rapidly changing all the time now,” said Ari Glockner, a student at Case Western Reserve University in Cleveland. He added: “We don’t know what it is going to be like five years from now, but I would bet we are still going to be dealing with it pretty consistently.”

AUSTIN, Texas--(BUSINESS WIRE)--As the first multifamily management company to be recognized in the Public Relations and Marketing Excellence Awards, … END_OF_DOCUMENT_TOKEN_TO_BE_REPLACED

There have been whispers of cooling housing and rental prices in the San Francisco Bay Area, but that hasn't yet translated into practical, noticeable … END_OF_DOCUMENT_TOKEN_TO_BE_REPLACED

Cars pass in Independence Square at twilight in Kyiv, Ukraine, Monday, Oct. 31, 2022. Rolling ... [+] blackouts are increasing across Ukraine as the … END_OF_DOCUMENT_TOKEN_TO_BE_REPLACED