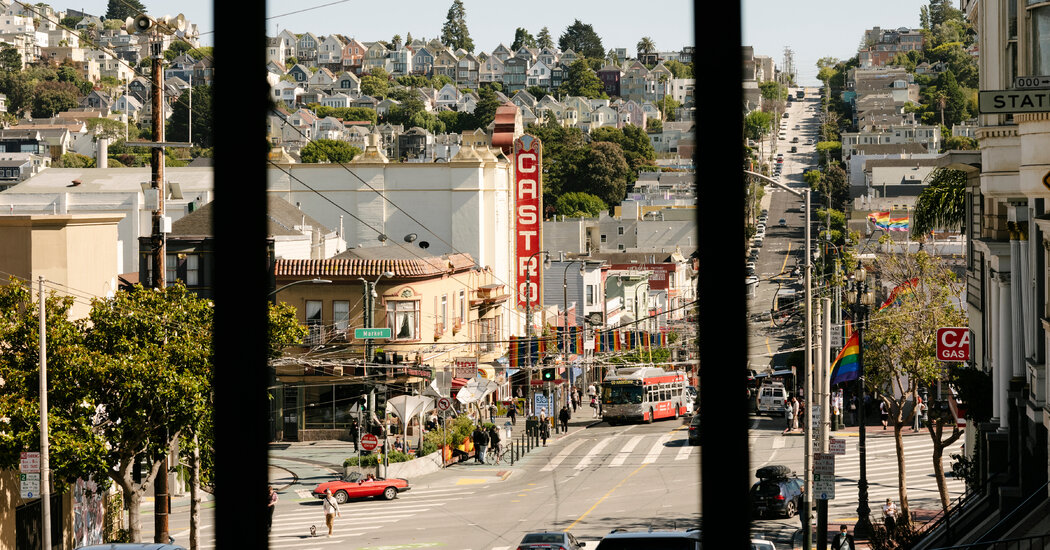 SAN FRANCISCO — Cleve Jones has lived in the Castro neighborhood for nearly 50 years, almost from the day he graduated from high school in Phoenix and hitchhiked to California.

He has been a political and cultural leader in San Francisco, organizing gay men and lesbians when the AIDS epidemic devastated these streets in the early 1980s. He created the nationally recognized AIDS Memorial Quilt from a storefront on Market Street. He was a face of the anger and sorrow that swept the Castro in 1978 after the assassination of Harvey Milk, the first openly gay man elected to the Board of Supervisors.

Mr. Jones has helped define the Castro, dancing at its gay bars seven nights a week when he was younger, gathering with friends for drinks and gossip as he grew older. To this day, he is recognized when he walks down its sidewalks. “Hi Cleve — I know who you are,” said Lt. Amy Hurwitz of the San Francisco Police Department, after Mr. Jones began to introduce himself.

Harvey and the Rainbow Honor Walk, celebrating famous queer and trans people,” Mr. Jones said as he led a visitor on a tour of his old neighborhood, pointing out empty storefronts and sidewalks. “I just can’t help but think that soon there will be a time when people walking up and down the street will have no clue what this is all about.”

Housing costs are a big reason for that. But there are other factors as well.

L.G.B.T.Q. couples, particularly younger ones, are starting families and considering more traditional features — public schools, parks and larger homes — in deciding where they want to live. The draw of “gayborhoods” as a refuge for past generations looking to escape discrimination and harassment is less of an imperative today, reflecting the rising acceptance of gay and lesbian people. And dating apps have, for many, replaced the gay bar as a place that leads to a relationship or a sexual encounter.

recognition of same-sex marriage in 2015, that has pushed for equal rights and integration into mainstream society.

rainbow crosswalk at the corner of Castro and 18th Street and there was nobody walking,” she said. “The Castro and San Francisco have changed a lot over the past 25 years. We have seen a lot of L.G.B.T.Q. people move from San Francisco to Oakland — which is where I live — and even further out in the East Bay.”

U.S. census data over the past three decades showed a decline in the density of same-sex couples in Chelsea and Greenwich Village in New York City, Dupont Circle in Washington, D.C., West Hollywood in Los Angeles County and the Castro, which he called “America’s premier gay neighborhood.”

Dr. Hess said part of this was generational. The men and women who established these neighborhoods “wanted to segregate and be surrounded by gay people,” he said. “In contrast, when you ask young people today what they want, they would prefer an inclusive coffee shop. They don’t want anyone to feel unwelcome.”

Some gay leaders argued that the instinct to live in communities of like-minded people remained a powerful draw and that there would always be some version of a gayborhood, though perhaps not as concentrated and powerful.

“I say this as a gay man: It’s nice to live in a community where there are a lot of other queer people there, where I can go out and walk on the street to a gay bar,” said Scott Wiener, a California state senator who lives in the Castro. “Where I can walk two blocks to get an H.I.V. and S.T.D. test at a clinic that won’t judge me.”

“We have to be very intentional of protecting these neighborhoods — and keeping them queer,” he said. “With that said, I also believe that the Castro is very strong and has very deep L.G.B.T.Q. roots.”

These changes follow a comparable pattern in American history: Immigrants establish ethnic neighborhoods to escape discrimination and build community ties, but those enclaves lose their distinction and energy as subsequent generations move to suburbs that have become more welcoming

In New York City, that has meant a shift from Greenwich Village to Chelsea to Hell’s Kitchen; in the Los Angeles area, a migration from West Hollywood to neighborhoods like Silver Lake. But the relocations this time have been more far-flung.

“I know a lot of new gay dads who are living in Fort Greene and Clinton Hill,” two neighborhoods in Brooklyn, said Corey Johnson, a former speaker of the New York City Council who is gay and lives in Greenwich Village. “They are not traditional gay neighborhoods. Schools are better. It’s more affordable. And you have more space.”

Mr. Johnson argued this had in fact resulted in an increase of openly gay and lesbian members of the City Council. But other L.G.B.T.Q. leaders said there was a real danger in this kind of diaspora.

“I think it’s important that we have spaces where we walk around, hold hands and maybe share a brief kiss and not be too worried,” said Tina Aguirre, the manager of the Castro L.G.B.T.Q. Cultural District. “We need to live in queer neighborhoods. It’s just not as pressing as it was in the ’80s and ’90s.”

On a beautiful afternoon in June, gay rainbow flags were fluttering up and down Castro Street as Mr. Jones walked by reminders of an earlier era. The Castro Theater, a landmark backdrop for parades and protests over decades, is reopening after a long closure forced by Covid-19. Men, mostly, were drinking in bars, and some of the sex shops were open. At one point, a completely naked man walked nonchalantly past on the sidewalk.

“I guess he’s trying to keep the neighborhood gay, too,” Mr. Jones said.

Mr. Jones paused by the storefront where Mr. Milk had a camera shop. In 1979, Mr. Jones lived two houses away and watched from his apartment when the police moved in on protesters on Castro Street following the lenient verdicts handed down to Dan White, a former supervisor, for the assassinations of Mr. Milk and George Moscone, the San Francisco mayor. “The night of the White Night riots, when the police counterattacked, we were out on the fire escape up there just watching the chaos,” Mr. Jones said.

Mr. Milk, evicted from his Castro Street storefront, had later moved his camera shop over Market Street. That was the space Mr. Jones used for the AIDS quilt project. It is today a restaurant.

Mr. Jones is not happy about leaving this corner of San Francisco, but said he had little choice. He had lived in his Castro apartment for 11 years before his landlord asserted that he forfeited his rent control protections by living in Sonoma County, effectively forcing him out by more than doubling his rent. He said he liked having the getaway of his home in Guerneville, but had considered himself a city person from the day he arrived here as a teenager from Phoenix.

“Everything good in my life has come out of this neighborhood,” he said.

MIAMI--(BUSINESS WIRE)--Intelli Smart Homes, the leading smart home technology company, has been recognized as one of America’s fastest-growing … END_OF_DOCUMENT_TOKEN_TO_BE_REPLACED

Customers outside a Walmart store in Torrance, California, US, on Sunday, May 15, 2022. Walmart Inc. is scheduled to release earnings figures on May … END_OF_DOCUMENT_TOKEN_TO_BE_REPLACED

The past few years have been brutal on homebuyers' budgets. Would-be buyers have been priced out of some of the most desirable neighborhoods thanks to … END_OF_DOCUMENT_TOKEN_TO_BE_REPLACED