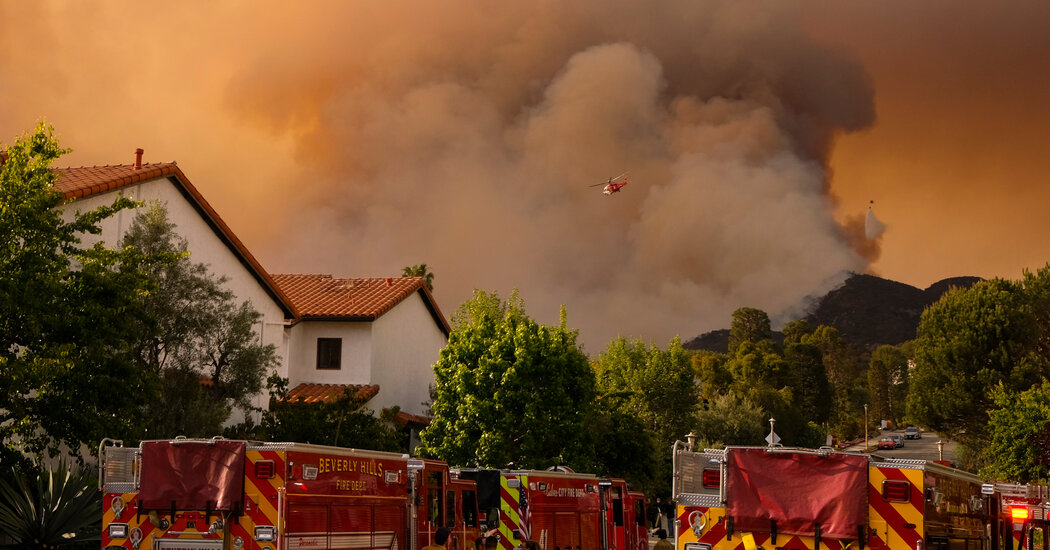 The cause of the fire was “deemed to be a ‘suspicious start’ and it remains an open, active investigation,” the department said. There were no reports of injuries or damaged structures.

department said in a statement that “cool and moist” overnight weather led to “calmer fire activity,” but that as it warmed up on Sunday, conditions were expected to worsen as “the vegetation in this area is very dry and has not burned in 50+ years.”

Onshore winds, which could push the fire northwest, were expected to increase on Sunday afternoon and “resources are in place for any structural defense required,” the department said.

Firefighters were on the ground “in the difficult terrain” working to dig lines in the ground to stop the spread of the fire, and helicopters were dropping water, the department said. An earlier statement described the terrain as “very steep and extremely difficult to navigate, which hinders ground-based firefighting operations.”

The mandatory evacuation order covered about 500 homes and affected about 1,000 people, said Capt. Erik Scott, a spokesman for the Los Angeles Fire Department.

The agency said that winds near the fire were expected to push smoke east into Topanga State Park through Sunday afternoon, and that “meteorological conditions will bring smoke and ash into portions of Los Angeles County with localized impacts near the Palisades Fire.”

AUSTIN, Texas--(BUSINESS WIRE)--As the first multifamily management company to be recognized in the Public Relations and Marketing Excellence Awards, … END_OF_DOCUMENT_TOKEN_TO_BE_REPLACED

There have been whispers of cooling housing and rental prices in the San Francisco Bay Area, but that hasn't yet translated into practical, noticeable … END_OF_DOCUMENT_TOKEN_TO_BE_REPLACED

Cars pass in Independence Square at twilight in Kyiv, Ukraine, Monday, Oct. 31, 2022. Rolling ... [+] blackouts are increasing across Ukraine as the … END_OF_DOCUMENT_TOKEN_TO_BE_REPLACED