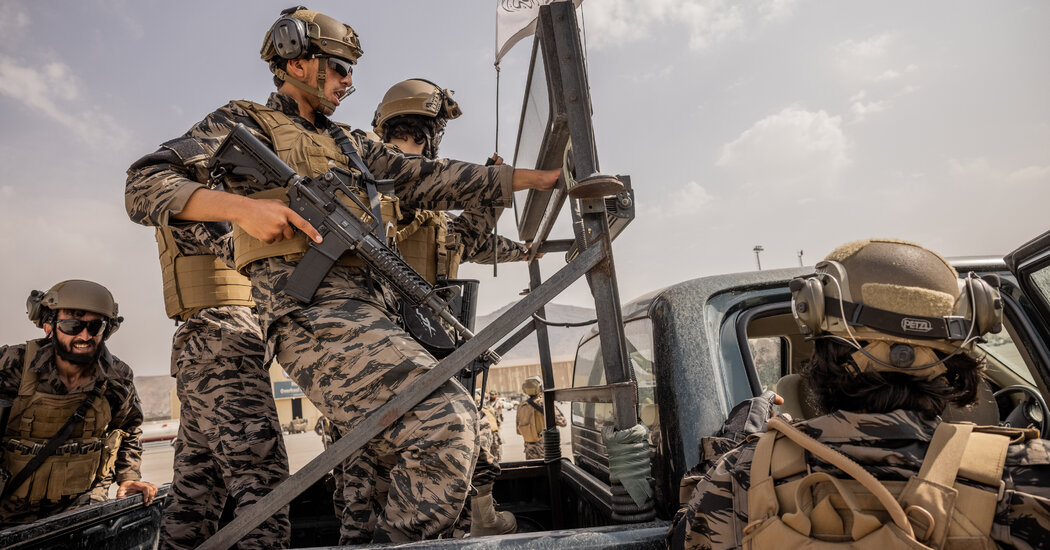 WASHINGTON — Just over a day after the last American service member left Afghanistan, the Pentagon’s top two leaders expressed wariness on Wednesday about continuing to cooperate with Taliban leaders who helped provide safe passage to more than 124,000 people evacuated out of the country.

“We were working with the Taliban on a very narrow set of issues,” Defense Secretary Lloyd J. Austin III told reporters. “I would not make any leaps of logic to broader issues. It’s hard to predict where this will go in the future with respect to the Taliban.”

Gen. Mark A. Milley, the chairman of the Joint Chiefs of Staff, was more blunt in his assessment of the Taliban, which took control of Kabul, Afghanistan’s capital, two weeks ago after rapidly advancing across the country. American commanders have praised Taliban leaders for their cooperation during the evacuation of Americans and their Afghan allies during the war.

“This is a ruthless group,” said General Milley, who commanded troops in Afghanistan. “Whether or not they change remains to be seen. In war, you do what you must.”

General Milley also defended an Air Force drone strike on Sunday that the military says destroyed a car filled with explosives that posed an “imminent” threat to the evacuation operation. Afghans on the ground say it killed at least 10 people, including seven children.

Pentagon officials say they are investigating the reports of civilians deaths, but General Milley said the military had “very good intelligence” that ISIS-K was preparing a specific vehicle at a specific location to be used to attack the airport.

He said secondary explosions after the drone strike supported the military’s conclusion that the car contained explosives, adding that military planners took the proper precautions before the strike to limit risks to civilians nearby.

“At this point, we think the procedures were correctly followed, and this was a righteous strike,” General Milley said.

The Pentagon leaders said the mission in Afghanistan had shifted to a diplomatic effort, led by the State Department, to evacuate any remaining Americans or eligible Afghans who want to leave the country.

The Biden administration has pledged to continue efforts to bring more people out of the country, but has come under pressure to act faster. U.S. officials believe that fewer than 200 American citizens remain in Afghanistan, along with many thousands of Afghans who assisted the United States over the past two decades.

“The entire Biden administration’s highest priority should be getting all American citizens and Afghan partners out of this disastrous and dangerous situation they created — they made commitments to these people and must follow through on them,” said Representative Michael McCaul of Texas, the top Republican on the House Foreign Affairs Committee.

Some 20,000 Afghans have arrived at eight military bases in the United States, where they are set to complete processing for resettlement across the country. But about 43,000 Afghans are still in transit along way-stops in the Middle East and Europe. The pipeline could take weeks or even a few months to clear, U.S. officials say.

Mr. Austin pointedly said the State Department’s Special Interest Visa program, known as S.I.V., was ill equipped to deal with the avalanche of Afghans who sought to flee their country.

Though the program was used to evacuate thousands of Afghan interpreters, drivers and others who worked and fought alongside American troops, ultimately, thousands of other Afghans at risk of reprisals by the Taliban were evacuated under less cumbersome mechanisms.

“For the type of operation that we just conducted, I think we need a different type of capability,” Mr. Austin said.

Mr. Austin and General Milley, both four-star Army combat veterans of Afghanistan, used the news conference to express their gratitude to the 800,000 American service members who served in the 20-year war. “Your service mattered, and it was not in vain,” Mr. Austin said.

GREENVILLE, N.C.--(BUSINESS WIRE)--Employers aiming to win the war on talent have a new “A” team to tap into: college and professional athletes. … END_OF_DOCUMENT_TOKEN_TO_BE_REPLACED

Mortgage rates are likely to rise in July, extending a seven-month streak. High inflation, and the Federal Reserve's efforts to control it, have … END_OF_DOCUMENT_TOKEN_TO_BE_REPLACED