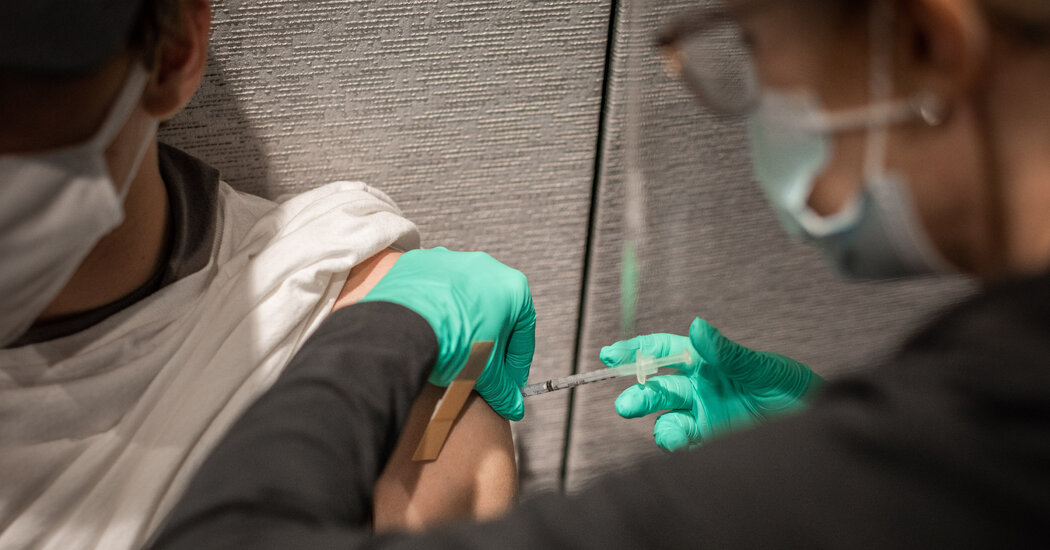 TAHLEQUAH, Okla. — As people across the United States jockey and wait to get vaccinated, a surprising problem is unfolding in the Cherokee Nation: plenty of shots, but not enough arms.

“We’re running out of people to vaccinate,” said Brian Hail, who helps oversee the tribe’s vaccination efforts. He winced as he pulled up the day’s schedule one recent morning: Vaccinations were open to basically everyone across the reservation, but 823 appointments sat unclaimed.

It is a side effect of early success, tribal health officials said. With many enthusiastic patients inoculated and new coronavirus infections at an ebb, the urgency for vaccines has gone distressingly quiet.

Now, the tribe is confronting what looms as a major hurdle for the entire country as vaccine supplies swell to meet demand: how to vaccinate everyone not eagerly lined up for a shot.

anyone who qualifies, tribal member or not, living in its borders.

Still, hundreds of slots have gone unfilled, health officials said. Cherokee-speaking vaccine schedulers hired to set up appointments are waiting for their phones to ring.

“Those initial waves of people that really wanted and needed the vaccine — we worked through that,” said Mr. Hail, deputy executive director of external operations at Cherokee Nation Health Services. The tribe counts 141,000 citizens on the reservation and 380,000 worldwide. “We’re struggling to get people to come in.”

Dennis Chewey, 60, gave his brother and sister the tribe’s vaccination hotline and urged them to call. Mr. Chewey’s wife was at high risk because of her job as a casino housekeeper, and he knew several people who had died, including a health worker who had helped him treat his diabetes. But none of them had called.

New York neighborhoods to reach homebound people, and visiting rural communities where unreliable internet makes it difficult to sign up for appointments or log into vaccination websites. They are driving long dirt roads to reach families without the cars or gas money to visit vaccination clinics.

The Navajo Nation, which says it has vaccinated roughly 70 percent of its citizens, sent public health workers into rural corners of the high desert to vaccinate as many as 5,000 people close to their homes. The Cherokee Nation is planning “strike teams” of nurses with single-dose Johnson & Johnson vaccines.

The Osage Nation, in northeastern Oklahoma, is vaccinating about 200 people a day at a clinic that has the capacity to give 500 shots. It tried two mass vaccination events at its casinos, but the results were disappointing.

So the tribe bought two 30-foot “medical R.V.s” that will roll into smaller towns like Hominy and Fairfax to reach the 30 to 40 percent of tribal elders and essential workers who did not volunteer to get vaccinated. It is a house-by-house campaign against misinformation and wariness, waged with long conversations and patience.

nearly twice the rate of white people, and inflicted a cultural crisis by killing the elders who pass down language and traditional teachings. The economic toll of the pandemic has pummeled Native economies already racked by high poverty and unemployment.

The vaccine rollout in Native communities has been a surprising source of strength, especially as vaccinations of other communities, such as Black and Hispanic Americans, continue to lag behind white populations.

Working through the Indian Health Service and long-established networks of tribally run clinics, tribes are outpacing much of the country, already giving shots to healthy adults and eligible teenagers. Some have even thrown open the doors to nontribal members inside their borders.

In all, about 1.1 million vaccines have been distributed through the Indian Health Service and 670,000 have been administered. Still, health care advocates said frustrating gaps remained. Many Indigenous people in big cities and areas without tribal health centers had struggled to find vaccines.

Now, Native health workers are desperately hoping to get through to people like Nora Birdtail, 64, one of a shrinking number of Cherokee-speaking elders. Their names are marked down in a leather notebook that was created to inscribe their importance to Cherokee heritage and culture. Today, the notebook is a register of loss — of at least 35 lives and numberless stories cut short by the virus.

Even as hundreds of elders got vaccinated, Ms. Birdtail resisted. She is vulnerable the coronavirus from a stroke. Her job as a teacher’s aide brings her into close contact with children at the Cherokee Immersion School, where in-person classes are expected to resume soon.

Dolly Parton roll up their sleeves. But about 18 percent of American adults said they would probably not or definitely not get vaccinated, according to a recent survey by the Census Bureau.

Across Cherokee Nation, people who jumped to get vaccinated said they wanted to protect themselves and, more important, safeguard their community, elders and children who are still not eligible to get shots.

Those who hesitated said they still had too many questions — about the vaccines’ efficacy, side effects and the speed they made it to market. The three vaccines that have received emergency authorization in the United States have been shown to greatly reduce serious illnesses and deaths from the virus, and all went through layers of review by the government and outside scientists.

vaccine slots went unfilled because people did not realize they were eligible.

The nurses who run the Cherokee Nation’s vaccination program are obsessed with how to reel in more people. They are planning to vaccinate eligible students at Sequoyah High School. There is talk of vaccinations at barbecues, and T-shirts for the newly vaccinated. The health service has called and sent out mass texts asking unvaccinated members whether they are willing to come in.

One of those messages found Sherry Garrett, 68.

She and her husband had harbored deep suspicions about the vaccine and had planned to refuse it. But then her sister died in July after what her family believes was an undiagnosed case of Covid-19 months earlier. Someone at Walmart coughed in Ms. Garrett’s face. And when a Cherokee health worker called to offer a slot, Ms. Garrett said she relented, and convinced her husband, Larry, to come along.

As they sat in a half-empty monitoring area, waiting the requisite 15 minutes after Larry’s first dose, Ms. Garrett said she now saw getting the shot as part of who she was: “I’m Cherokee, so I have to do it.”

Kohl's announced Friday that it is terminating talks to sell its business, saying that retail environment has significantly deteriorated since the … END_OF_DOCUMENT_TOKEN_TO_BE_REPLACED