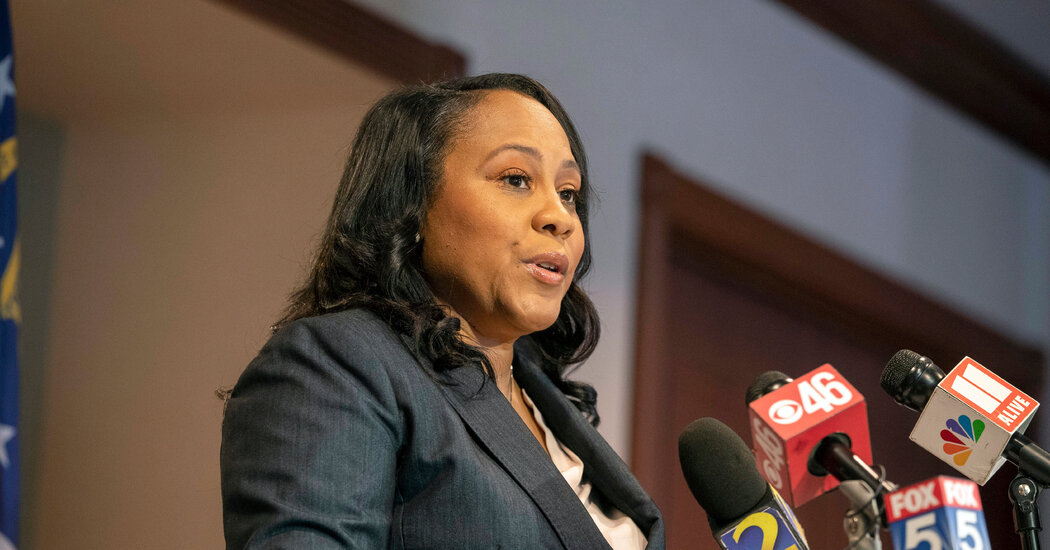 ATLANTA — The breadth, speed and seriousness of the criminal investigation into election meddling by former President Donald J. Trump and his associates in Georgia were underscored on Friday by the revelation that two pro-Trump state senators and the chair of the state Republican Party were sent letters by an Atlanta prosecutor informing them they could be indicted, according to a person familiar with the inquiry.

The Fulton County prosecutor, Fani T. Willis, is also weighing whether to subpoena Mr. Trump himself and seek his testimony before a grand jury, just days after she subpoenaed seven of his advisers, including Rudolph W. Giuliani and Senator Lindsey Graham of South Carolina, in an investigation into efforts to overturn Mr. Trump’s 2020 election loss in Georgia. The special grand jury is looking into a range of potentially criminal acts, including the selection of a slate of pro-Trump electors in the weeks after the election and Mr. Trump’s now-famous call to Brad Raffensperger, the Georgia secretary of state, asking him to “find” nearly 12,000 votes that would reverse his loss there.

The letters to David Shafer, the Georgia Republican Party chair, and State Senators Burt Jones and Brandon Beach were first reported by Yahoo News. Neither the men nor their lawyers could be reached for comment on Friday.

civil and criminal investigations across the country into his business dealings and political activities. Here is a look at the notable inquiries:

Westchester County criminal investigation. The district attorney’s office in Westchester County, N.Y., appears to be focused at least in part on whether the Trump Organization misled local officials about the value of a golf course, Trump National Golf Club Westchester, to reduce its taxes.

The so-called target letters are the latest indication that the Georgia investigation could be one of the most perilous legal problems for Mr. Trump and some of his allies. The televised congressional hearings into the Jan. 6 attack on the U.S. Capitol by Mr. Trump’s supporters have captured the attention of many Americans, but it is unclear if they will result in charges from the Justice Department. And a high-profile investigation by the office of the Manhattan district attorney into allegations that Mr. Trump inflated the value of his assets fell apart this year.

Some legal observers have argued that Mr. Trump’s actions, including his postelection phone calls to Georgia officials like Mr. Raffensperger, put him at risk of being indicted on charges of violating relatively straightforward Georgia criminal statutes, including criminal solicitation to commit election fraud. Ms. Willis, in court filings, has indicated that a number of other charges are possible, including racketeering and conspiracy, which could take in a broad roster of pro-Trump associates both inside and outside of Georgia.

“I do believe that the great likelihood is that he’s heading towards an indictment,” said Norman Eisen, who served as special counsel to the House Judiciary Committee during the first Trump impeachment, and who co-wrote a lengthy examination of the Georgia case by the Brookings Institution. Among other things, he said, “there is powerful proof of violations of Georgia law in the form of the smoking gun tape of him demanding 11,780 votes, when it is perfectly clear from that tape that he knows those votes do not exist.”

has argued that there was “nothing secret or surreptitious” about the meeting of the pro-Trump electors. Mr. Driscoll noted that Mr. Shafer had filed a lawsuit challenging the Georgia election results that had not been ruled upon by Dec. 14, the date that presidential electors must cast their votes.

The alternate pro-Trump electors were convened “for the sole purpose of preserving a remedy in the event the lawsuit succeeded,” Mr. Driscoll said in a statement.

But Ms. Willis’s office, in recent subpoenas to potential witnesses in the case, has characterized the pro-Trump electors as being “part of a multi-state, coordinated plan by the Trump campaign to inﬂuence the results of the November 2020 election in Georgia and elsewhere.”

On Wednesday, an independent journalist, George Chidi, testified before the grand jury in downtown Atlanta, Mr. Chidi said in an interview on Friday.

has previously written about finding the group of pro-Trump electors in a room in the State Capitol on Dec. 14, 2020, and asking a woman in the room what the meeting was about. “Education,” the woman told him. Mr. Chidi said he was then quickly ushered out of the room, and a person was placed by the door to guard it.

On Friday, lawyers for Mr. Jones, the state senator and Republican nominee for lieutenant governor, filed a motion arguing that Ms. Willis, the district attorney, and her office should be disqualified from any investigation of Mr. Jones because she had donated money and participated in a fund-raiser for Mr. Bailey, the Democratic lieutenant governor candidate.

Jeff DiSantis, a deputy district attorney who serves as a spokesman for Ms. Willis’s office, said in a statement that the motion was “without merit.” Political campaign issues, Mr. DiSantis said, have nothing to do with Ms. Willis’s “fulfillment of her oath of office to investigate and prosecute crimes occurring in Fulton County.”

Whether you optimistically hope that mortgage rates will decline or are resigned that rates will stay elevated above the historic lows of 2021, you … END_OF_DOCUMENT_TOKEN_TO_BE_REPLACED

A resident of Nikopol, Ukraine, in her backyard last month, with smoke rising from an area on the opposite bank of the Dnipro River. Credit...David … END_OF_DOCUMENT_TOKEN_TO_BE_REPLACED