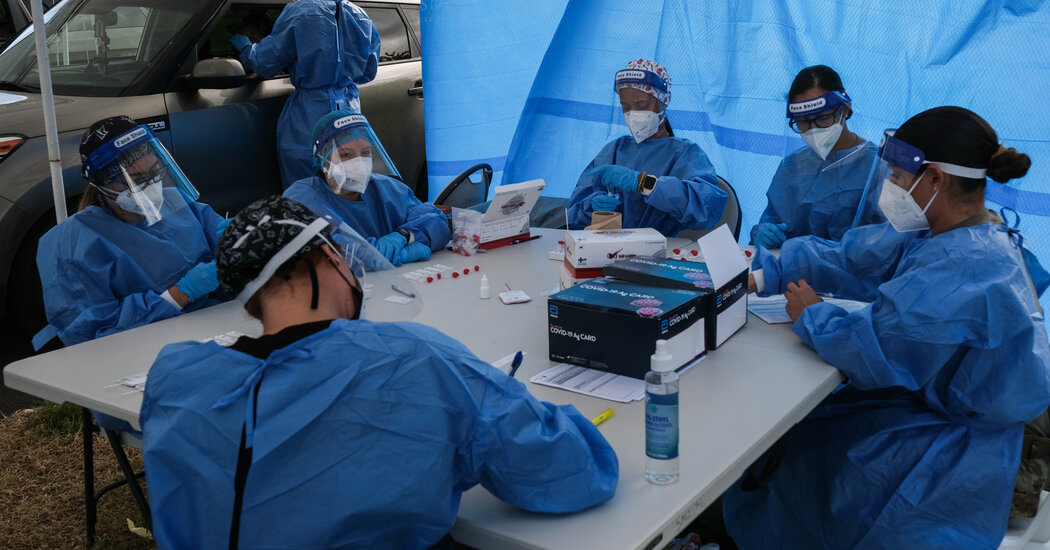 Armed with her vaccine passport and a giddy urge to celebrate the holiday season, Laura Delgado — and 60,000 other people in Puerto Rico — attended a Bad Bunny concert three weeks ago.

Three days later, she was sick with Covid-19, one of about 2,000 people who fell ill as a result of the two-day event.

“We did so well; we followed the rules,” said Ms. Delgado, a 53-year-old interior designer. “We followed the mask mandate. Our vaccination rate was so high that we let our guard down. The second Christmas came, we were like, ‘We’re going to party!’”

travelers and diners in hopes of staving off the new wave of cases.

dashboard of Puerto Rico Covid-19 data, tweeted the daunting facts: A third of all coronavirus cases the island has recorded since the start of the pandemic occurred in the past month. The number of cases per 100,000 residents jumped to 225, from three, in three weeks.

In December, the number of hospitalizations doubled — twice.

it reduced the recommended quarantine period to five days for those without symptoms.

Around the world. South Africa announced that its Omicron wave had passed without a large spike in deaths. Case counts in the country are down 30 percent in the last week. The announcement offered cautious hope to other countries grappling with the fast-spreading variant.

After a few dozen Miss World contestants got sick, the pageant finals in Puerto Rico were canceled.

On Thursday, the Scientific Coalition, a group of scientists and health professionals that has been advising the governor, recommended even stricter measures, such as limits on alcohol sales and shorter hours for bars and other establishments. On Friday, the governor followed the recommendation and ordered businesses closed between midnight and 5 a.m. from Jan. 4 until Jan. 18. He also mandated booster shots for restaurant employees and public safety workers.

“It’s a message that’s hard to digest when two weeks ago the case numbers here were among the lowest in the world,” said Daniel Colón-Ramos, a Yale University professor who is president of the coalition.

The measures are particularly hard in Puerto Rico, he said, where it is hard to overstate the importance of a holiday season that starts at Thanksgiving and lasts until Jan. 6. He described it as “Fourth of July plus the Super Bowl.”

The average age of people who become infected on the island is 33, health officials said. But experts worry that if young people who become infected while attending parties and other events visit elders for New Year’s and Three Kings Day, the number of sick older people is certain to rise. With so many of its young professionals moving in recent years to Florida, Texas and other states, Puerto Rico has a disproportionately high percentage of older adults, many of whom suffer from diabetes, obesity and other ailments that put them at higher risk for coronavirus complications.

“We have a health system that is — it’s not a secret — fragile,” said Carlos R. Mellado López, the island’s secretary of health. He urged people not to unnecessarily overwhelm testing centers and insisted that Puerto Rico had the tools necessary, such as monoclonal antibody treatments, to combat the crisis.

But experts also caution that thousands of medical professionals have left Puerto Rico in recent years in search of higher salaries, which could complicate the island’s ability to attend to large numbers of sick people. The number of doctors on the island has dropped by 5,000 since 2006, and another exodus of primary care doctors is anticipated because they were left out of recent tax incentives designed to keep specialists from leaving, said Víctor M. Ramos Otero, president of the Puerto Rico doctors’ association.

“The problem we have is not the beds,” Mr. Ramos said. “The principal issue is the personnel.”

“From what we are seeing at testing sites, this is not over,” he said. “It’s going to be two more weeks. The expectation is that the case rate will go up.”

AUSTIN, Texas--(BUSINESS WIRE)--As the first multifamily management company to be recognized in the Public Relations and Marketing Excellence Awards, … END_OF_DOCUMENT_TOKEN_TO_BE_REPLACED

There have been whispers of cooling housing and rental prices in the San Francisco Bay Area, but that hasn't yet translated into practical, noticeable … END_OF_DOCUMENT_TOKEN_TO_BE_REPLACED

Cars pass in Independence Square at twilight in Kyiv, Ukraine, Monday, Oct. 31, 2022. Rolling ... [+] blackouts are increasing across Ukraine as the … END_OF_DOCUMENT_TOKEN_TO_BE_REPLACED