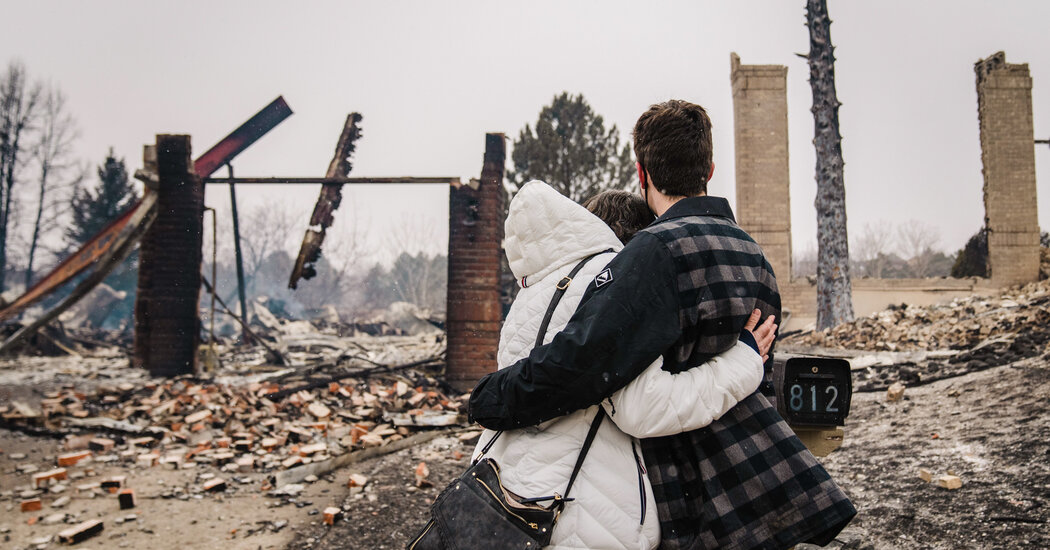 LOUISVILLE, Colo. — It took only a few hours for the flames to cut an unimaginable path of destruction across the drought-starved neighborhoods between Denver and Boulder.

By Friday morning, as smoke from the most damaging wildfire in state history cleared, more than 500 homes, and possibly as many as 1,000, had been destroyed. Hundreds of people who had hastily fled returned to ruins, everything they owned incinerated in the fast-moving blaze. Entire neighborhoods had been reduced to ashes.

wildfires in the American West have been worsening — growing larger, spreading faster and reaching into mountainous elevations that were once too wet and cool to have supported fierce fires. What was once a seasonal phenomenon has become a year-round menace, with fires burning later into the fall and into the winter.

Recent research has suggested that heat and dryness associated with global warming are major reasons for the increasing prevalence of bigger and stronger fires, as rainfall patterns have been disrupted, snow melts earlier and meadows and forests are scorched into kindling.

Colorado Climate Center, said the Boulder region had experienced a wet spring followed by months that were “extremely dry, since about the middle of summer.” He added that “an event like this puts into context how dangerous and how potentially deadly winter season fires that occur primarily over grassland can be.”

mass shooting at a grocery store in March that left 10 people dead. As residents took stock of the fire damage, some expressed a sense of resignation that what had happened on Thursday was a frightening new part of what it means to live in a landscape scarred by the warming earth.

“I’m seeing my future,” said Angelica Kalika, 36, of nearby Broomfield. “I grew up in Colorado, and this is a place where I’ve had snowy Christmases and a nice 60-degree summer. But for me, this is a moment of deep reckoning of climate change when there is a wildfire outside my door.”

Video published by a local television station showed a cul-de-sac where one house had been destroyed, while the others appeared to be intact. In one neighborhood, a line of about 10 still-smoldering rubble piles was situated next to other houses that appeared to have escaped severe damage.

“I think it’s indicative of our future,” said Laurie Silver, a resident of a nearby suburb who on Friday morning stood near the smoking remnants of her cousin’s townhome in Louisville. “And I don’t know what it’s going to take for people to take it seriously. Maybe, when it directly affects people right where they live.”

Ms. Silver said her cousin had been traveling in Tennessee. His only remaining possessions were what he had packed in his carry-on.

On New Year’s Eve, with the fire mostly contained and an intensifying snowstorm promising to help limit additional damage, displaced residents faced another uncertain night at shelters or in the homes of friends or relatives, some still waiting to learn whether their property had been damaged.

“If our place is smoke damaged, who determines that?” said Ben Sykora, who rushed out of his rental home in Superior, Colo., after grabbing a backup computer hard drive and a couple of changes of clothes. “I don’t want to get thinking too materially, but we’re kind of all waiting, seeing how much is this going to flip our lives upside down. As of right now, we just don’t know.”

Boulder County and surrounding areas on Colorado’s Front Range live with the frequent threat of wildfires, although those concerns have historically been associated more with the summer and autumn months and the forested hillsides west of the cities. Few people were prepared for the sudden onslaught on Thursday.

“You think you’re safe here — these things happen in the mountains,” said Steve Sarin, whose apartment narrowly escaped destruction. “Out here, we think we’re relatively protected from the dangers of wildfires. Yesterday was a big wake-up call.”

A Falcon 9 rocket launches the GPS III SV05 satellite on a mission for the U.S. Space Force on June 17, 2021.SpaceXElon Musk's SpaceX broke its own … END_OF_DOCUMENT_TOKEN_TO_BE_REPLACED

The "Dog Whisperer" is also a real estate whiz.Canine trainer Cesar Millan has quickly found a buyer for his $4 million Encino, CA, residence. The … END_OF_DOCUMENT_TOKEN_TO_BE_REPLACED