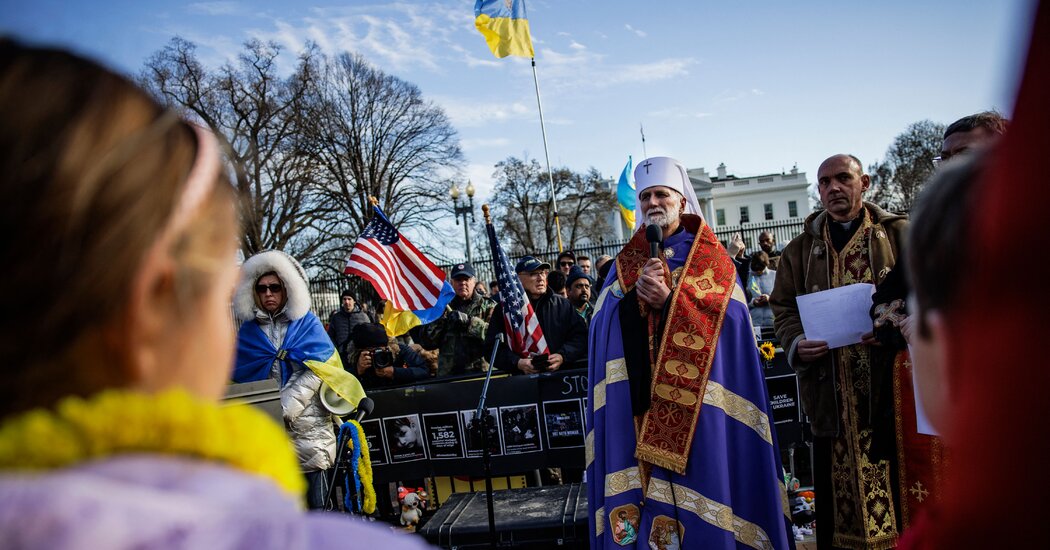 After two years of political divisions and economic disruptions bolstered by an unending pandemic, many Americans say they are coming together around a common cause: support for Ukraine, a country under daily siege by Russian forces.

The rare moment of solidarity is driven, in part, by the perception of America as a steadfast global defender of freedom and democracy. Many Americans say they see a lopsided fight pitting a great power against a weaker neighbor. They see relentless images of dead families and collapsed cities. They see Ukraine’s president pleading for help.

In polls and interviews since the attack, Americans across the political spectrum said the nation had a duty to respond to President Vladimir V. Putin’s brazen invasion — even if that means feeling, at least in the short term, the pinch of high gas prices and inflation.

“I understand we want to stay out of it, but what’s happening is worse than anyone could imagine. We can do without gas when there are children there being killed,” said Danna Bone, a 65-year-old retiree in McMinnville, Ore., and a Republican. “It’s horrific what’s happening there, and we need to be doing our part. I would like to see them doing more. What that looks like, I really don’t know.”

array of painful economic sanctions on Russia and blocked its oil, gas and coal imports. The administration has already approved $1.2 billion in aid to Ukraine, and President Biden is expected to announce another $800 million in military assistance. Three weeks into the invasion, most Americans in both political parties support U.S. aid to Ukraine and overwhelmingly support economic sanctions, a new Pew Research Center survey found.

Already, the issue of America’s role in Ukraine is scrambling U.S. politics and reinvigorating the bond between the United States and its European allies.

About a third of Americans said the United States was providing the appropriate amount of support to Ukraine, but an even larger share, 42 percent, is in favor of the country doing even more, the Pew survey showed. The same poll found, however, that about two-thirds of Americans do not support military intervention.

In pockets across the country, how people saw America’s global might and obligations was often influenced by their individual circumstances and economic stability. They often drew a line, if a crooked one, between the war and the crises at home. Conversations about Russian strikes and shellshocked refugees fleeing Ukraine quickly gave way to discussion about the personal cost of gas and food, a sputtering economy and the enduring pain of the pandemic, the kind of grievances that might temper support for Ukraine over time.

moving in opposite political directions in recent years — Macomb to the right, Oakland to the left — liberals and conservatives are united in a belief that what is happening in Ukraine is wrong and that the United States could be doing more. But they offered divergent opinions on the causes of the war or whether Mr. Biden has been adept at handling the foreign policy crisis.

establishing a no-fly zone over Ukraine and had been unhappy with the U.S. response so far. “I truly believe that it could be doing more to help,” she said. “It is the humane thing to do.”

An Economist/YouGov survey conducted in early March showed that a majority of Americans, about 73 percent, sympathized more with Ukraine than Russia. The poll also showed that 68 percent approved of imposing economic sanctions, and slightly less approved of sending financial aid or weapons. But only 20 percent favored sending American troops to fight Russians in Ukraine.

Alejandro Tenorio, 24, said sanctions ought to be the primary tool to force Mr. Putin to back down, and maybe motivate the Russian people to act.

“I think these political sanctions should continue. Let the people from Russia take matters into their own hands to maybe try to change the government and change their ways,” said Mr. Tenorio, a tech support specialist for a data company who described himself as a “left-leaning moderate.”

The Biden administration, said Mr. Tenorio, who lives in Johns Creek, Ga., could be a bit more aggressive, with “more things to hurt their economy.”

“I think that should be about it,” he said. “I think Biden is doing as much as he can, or as much as he’s allowed to do.”

Others believe that American troops on the ground are a dangerous but necessary response.

Dan Cunha is a 74-year-old Vietnam veteran and retired small business owner who lives in Anaheim, Calif. He describes himself as a political independent, and wrote in John Kasich, the Republican former governor of Ohio, in the 2020 election.

“It breaks my heart to see what is happening there now, to see an autocrat rise to power, and we’re not doing anything to stop it,” he said. “He is nationalist in the extreme. If it were up to me, I would put troops there. Putin is a bully, and bullies need to be slapped back.”

Mr. Cunha regularly spends time at the local V.F.W. outpost, where most of his friends are what he describes as “die-hard Republicans,” and said that many argue that the conflict would not have happened at all if Donald J. Trump were still president.

“The majority of the veterans I talk to say the same thing as I do — boots on the ground,” he said.

While supportive of Ukraine’s plight, some Middle Eastern refugees and immigrants outside of Detroit said this conflict felt different from those in Afghanistan and Iraq, because the world is paying attention to the suffering of white European families in a way they felt that it had not with their own.

“I grew up watching my country get torn apart, ” said Maria, a Syrian college student who asked that her full name not be used for fear of endangering her family still in the country. She emphasized that she felt and understood Ukrainians’ pain, and that she herself had been stunned to see Europeans go to war. But she said she hoped that Americans would realize that this is what life had been like for people in Syria and other Middle Eastern countries for decades.

The war feels personal for Maryana Vacarciuc, 24, and her husband, Radion Vacarciuc, 25. The Ukrainian immigrants have been living in the metro Atlanta area with their two children for the last three years, but they still have relatives in Ukraine.

Unlike some Ukrainian immigrants who are pressing for greater American involvement, they feel bad about the predicament of their homeland and family members — and recall the last conflict in 2014 — but said they recognize the limitations of the U.S. government.

Her husband added: “But if America gets too involved, then we might be the ones leaving our kids and going to fight the war,” he said. Asked if America has a role to play in the Ukraine war, he said no.

“America is its own country,” he said. “Ukraine, Russia, they’re fighting their own battles.”

AUSTIN, Texas--(BUSINESS WIRE)--As the first multifamily management company to be recognized in the Public Relations and Marketing Excellence Awards, … END_OF_DOCUMENT_TOKEN_TO_BE_REPLACED

There have been whispers of cooling housing and rental prices in the San Francisco Bay Area, but that hasn't yet translated into practical, noticeable … END_OF_DOCUMENT_TOKEN_TO_BE_REPLACED

Cars pass in Independence Square at twilight in Kyiv, Ukraine, Monday, Oct. 31, 2022. Rolling ... [+] blackouts are increasing across Ukraine as the … END_OF_DOCUMENT_TOKEN_TO_BE_REPLACED