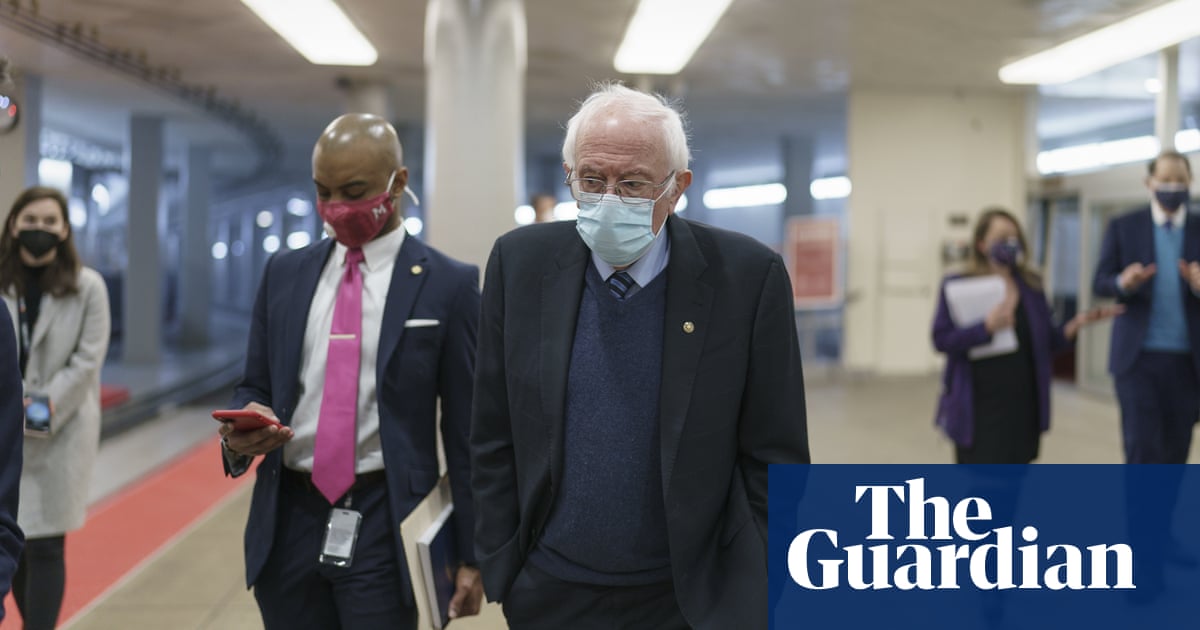 A fiery speech and last-ditch effort by Bernie Sanders to secure a place for a federal minimum wage hike in the $1.9tn coronavirus relief package appeared as good as doomed on Friday, as Joe Biden’s flagship legislation hit grinding delays in the Senate.

As Senate Democrats reluctantly moved past that battle, they lurched into another roadblock as an apparent deal between progressives and moderates over unemployment benefits threatened to derail the sweeping stimulus bill.

Progress on the bill slowed to a crawl on Friday afternoon, signaling that the legislation might not pass until the weekend, with Republicans still expected to introduce many amendments, all of which must see votes.

Despite delays, the Senate majority leader, Chuck Schumer, said the chamber would finish its work.

“The Senate is going to take a lot of votes. But we are going to power through and finish this bill, however long it takes,” Schumer said. “The American people are counting on us and our nation depends on it.”

US Congress will respond to the needs of working families rather than just the wealthy and large corporations and their lobbyists?” he said.

Debate, voting on amendments, and backroom horse-trading began in earnest on Friday, a day after the vice-president, Kamala Harris, broke a Senate tie to allow the chamber to take up the bill.

Following Sanders’ speech, eight Democrats joined all Republicans to vote against the minimum wage proposal, suggesting that progressives vowing to continue the effort in coming months will face a difficult fight.

Though Sanders’ amendment was poised for defeat, the vote remained open as Democrats scrambled to hammer out a deal on unemployment benefits.

The version of the relief bill passed by the House provides $400 weekly emergency unemployment benefits – on top of regular state payments – through August.

But in a compromise with moderates revealed earlier on Friday, Senate Democrats said that would be reduced to $300 weekly but extended until early October.

The plan, sponsored by Senator Tom Carper of Delaware, would also reduce taxes on unemployment benefits by making $10,200 of individuals’ benefits tax exempt.

The White House announced its support for the Democratic amendment, as the press secretary, Jen Psaki, said: “The president believes it is critical to extend expanded unemployment benefits through the end of September to help Americans who are struggling, as the president proposed in the American Rescue Plan.”

But according to multiple reports, the conservative West Virginia Democratic Senator Joe Manchin signaled he might support a Republican proposal to lower the benefits to $300 a week without either of the other parts of Carper’s measure.

With power in the Senate split 50-50 between the two parties, just one Democratic defection is needed to block legislation or stall voting along the way if no Republicans cross the aisle.

“I feel bad for Joe Manchin. I hope the Geneva Convention applies to him,” the No 2 Senate Republican, John Thune of South Dakota, wryly told reporters.

The overall bill, aimed at battling the killer virus and nursing the staggered economy back to health, will provide direct payments of up to $1,400 to most Americans.

There is also money for Covid-19 vaccines and testing, aid to state and local governments, help for schools and the airline industry, tax breaks for lower-earners and families with children, and subsidies for health insurance.

Apoll by Monmouth University found that 62% of Americans approve of the stimulus package, including more than three in 10 Republicans.

That is something Republicans hope to erode, by portraying the bill as too big and representing wasteful public spending for a pandemic that’s almost over. Biden and federal health experts this week, however, told states rushing to ditch mask mandates and reopen businesses completely that the move was premature and they risked creating a fourth deadly surge of disease.

The poshest place in California's Coachella Valley is The Madison Club. This exclusive gated community in La Quinta is where A-listers and tycoons … END_OF_DOCUMENT_TOKEN_TO_BE_REPLACED

KOROPY, Ukraine — Four men tugged at long strips of fabric to lift a coffin out of the gaping hole in the backyard of a small house. They flung the … END_OF_DOCUMENT_TOKEN_TO_BE_REPLACED