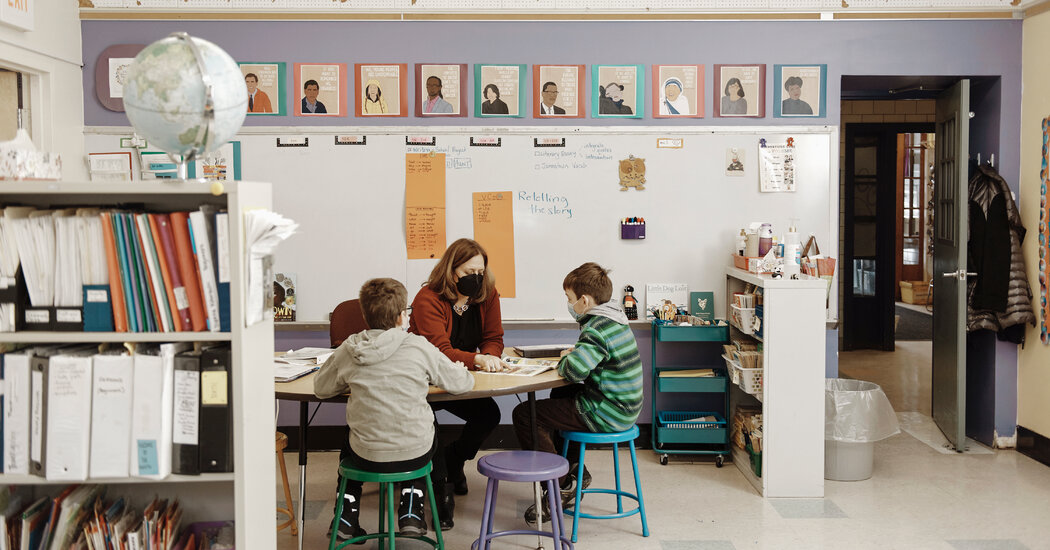 David Fleishman, the superintendent of schools in Newton, Mass., an affluent Boston suburb, said he recently received a message from a parent who pushed for ending mask mandates in classrooms.

But first, he said, the individual felt the need to assure him, “I am not a Trump supporter.”

While Newton, like much of Massachusetts, is mostly liberal and Democratic, Mr. Fleishman said that when it comes to masks, “there’s this tension.”

The battle over mask mandates may be moving to liberal-leaning communities that had been largely in agreement on the need for masking — and bound by statewide mask requirements.

Now that Massachusetts will lift its school mask mandate on Feb. 28, joining other liberal states like New Jersey and Connecticut, it will be up to individual school districts like Newton, and nearby Boston, to decide whether and how quickly they want to rescind their own mask rules.

somewhat lower — significantly so for Black and Latino children, who make up most of the district — the public school district says it has no plan to end its mask mandate.

he said, could stay safe by wearing high-quality masks even when those around them are not covered. Throughout the pandemic, he pointed out, virus transmission inside schools has been limited, including in some places where masks have not been required.

Dr. Jha’s advice, however, is not necessarily reassuring to educators who have seen guidelines change frequently over the past two years.

In many left-leaning regions, virus safety plans have been painstakingly negotiated between teachers’ unions and districts, and they may be complex to roll back.

“The knowledge of the virus changes, the variants change, the facts change, which is really frustrating,” said Jessica Tang, president of the Boston Teachers Union.

Teachers’ unions have been among the strongest supporters of masking, pushing in recent weeks for their members and students to have access to medical-grade masks and respirators, such as N95s, KN95s, KF94s and surgical masks. But individual teachers disagree on how important masks are, and how they are affecting students.

Last school year, Ms. Szwarcewicz experimented with teaching English in a mask with a clear plastic front so students could see the shapes her lips and tongue made while enunciating. But she gave that up when those masks quickly became damp and uncomfortable. She now uses videos to demonstrate proper pronunciation, and sometimes lowers her own mask briefly while standing several feet away from students.

Ms. Szwarcewicz said she would be comfortable with students taking off their masks, and would feel safe knowing her own mask offers protection. Still, she would gladly march in support of colleagues if her union voted to protest any relaxation of masking rules, she said.

The president of the Newton Teachers Association, Mike Zilles, indicated that there may, indeed, be resistance if the school committee chose to make masking voluntary. The state and district have recently eased in-school virus testing, contact tracing and quarantine procedures, leaving masks as an important remaining defense, he argued.

Feelings of pandemic burnout are common among teachers.

“We were thrown in there, asked to risk our lives, and nobody really acknowledged that,” Mr. Zilles said. “We were the guinea pig.”

Dr. Jha did acknowledge that academic studies were unlikely to sway those fearful of unmasked students, but said he anticipated consensus growing over time, as students in neighboring districts shed their face coverings without outbreaks.

“People have to emotionally and mentally get to a point where they are comfortable with this,” he said. “If the kids are all masked for the next two years, that’s a problem. I will push back pretty hard. But if they’re masked the next month or two, that’s fine.”

AUSTIN, Texas--(BUSINESS WIRE)--As the first multifamily management company to be recognized in the Public Relations and Marketing Excellence Awards, … END_OF_DOCUMENT_TOKEN_TO_BE_REPLACED

There have been whispers of cooling housing and rental prices in the San Francisco Bay Area, but that hasn't yet translated into practical, noticeable … END_OF_DOCUMENT_TOKEN_TO_BE_REPLACED

Cars pass in Independence Square at twilight in Kyiv, Ukraine, Monday, Oct. 31, 2022. Rolling ... [+] blackouts are increasing across Ukraine as the … END_OF_DOCUMENT_TOKEN_TO_BE_REPLACED