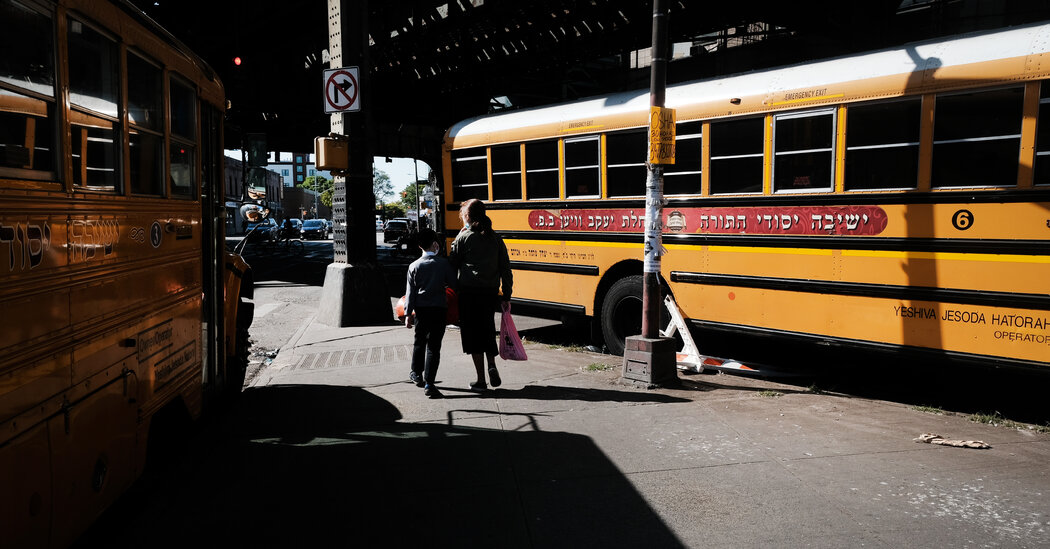 WASHINGTON — Tucked into the $1.9 trillion pandemic rescue law is something of a surprise coming from a Democratic Congress and a president long seen as a champion of public education — nearly $3 billion earmarked for private schools.

More surprising is who got it there: Senator Chuck Schumer of New York, the majority leader whose loyalty to his constituents diverged from the wishes of his party, and Randi Weingarten, the boss of one of the nation’s most powerful teachers’ unions, who acknowledged that the federal government had an obligation to help all schools recover from the pandemic, even those who do not accept her group.

The deal, which came after Mr. Schumer was lobbied by the powerful Orthodox Jewish community in New York City, riled other Democratic leaders and public school advocates who have spent years beating back efforts by the Trump administration and congressional Republicans to funnel federal money to private schools, including in the last two coronavirus relief bills.

Democrats had railed against the push by President Donald J. Trump’s education secretary, Betsy DeVos, to use pandemic relief bills to aid private schools, only to do it themselves.

wrote letters to Congress protesting the carve-out. “The floodgates are open and now with bipartisan support, why would private schools not ask for more federal money?”

Mr. Schumer’s move created significant intraparty clashes behind the scenes as Congress prepared to pass one of the most critical funding bills for public education in modern history. Senator Patty Murray, the chairwoman of the Senate Health, Education, Labor and Pensions Committee, was said to have been so unhappy that she fought to secure last-minute language that stipulated the money be used for “nonpublic schools that enroll a significant percentage of low‐​income students and are most impacted by the qualifying emergency.”

“I’m proud of what the American Rescue Plan will deliver to our students and schools and in this case specifically, I’m glad Democrats better targeted these resources toward students the pandemic has hurt the most,” Ms. Murray said in a statement.

Jewish leaders in New York have long sought help for their sectarian schools, but resistance in the House prompted them to turn to Mr. Schumer, said Nathan J. Diament, the executive director for public policy at the Union of Orthodox Jewish Congregations of America, who contended that public schools had nothing to complain about.

a statement to Jewish Insider, Mr. Schumer said, “This fund, without taking any money away from public schools, will enable private schools, like yeshivas and more, to receive assistance and services that will cover Covid-related expenses they incur as they deliver quality education for their students.”

The magnitude of the overall education funding — more than double the amount of schools funding allocated in the last two relief bills combined — played some part in the concession that private schools should continue to receive billions in relief funds. The $125 billion in funding for K-12 education requires districts to set aside percentages of funding to address learning loss, invest in summer school and other programming to help students recover from educational disruptions during the pandemic.

The law also targets long-underserved students, allocating $3 billion in funding for special education programming under the Individuals with Disabilities Education Act, and $800 million in dedicated funding to identify and support homeless students.

“Make no mistake, this bill provides generous funding for public schools,” a spokesman for Mr. Schumer said in a statement. “But there are also many private schools which serve large percentages of low-income and disadvantaged students who also need relief from the Covid crisis.”

Proponents of the move argue that it was merely a continuation of the same amount afforded to private schools — which also had access to the government’s aid program for small businesses earlier in the pandemic — in a $2.3 trillion catchall package passed in December. But critics noted that was when Republicans controlled the Senate, and Democrats had signaled they wanted to take a different direction. They also contend that Mr. Schumer’s decision came at the expense of public education, given that the version of the bill that initially passed the House had about $3 billion more allocated for primary and secondary schools.

a letter to lawmakers, the association’s director of government affairs wrote that while it applauded the bill, “we would be remiss if we did not convey our strong disappointment in the Senate’s inclusion of a Betsy DeVos-era $2.75 billion for private schools — despite multiple avenues and funding previously made available to private schools.”

Among the Democrats who were displeased with Mr. Schumer’s reversal was Speaker Nancy Pelosi of California, who told him that she preferred the provision Democrats had secured in the House version, according to people familiar with their conversation. They also said Representative Robert C. Scott, the chairman of the House education committee, was “very upset” about both the substance and the process of Mr. Schumer’s revision, and had his staff communicate that he was “insulted.”

is married to a rabbi, led calls to reject orders from Ms. DeVos to force public school districts to increase the amount of federal relief funding they share with private schools, beyond what the law required to help them recover.

But Ms. Weingarten said Ms. DeVos’s guidance “funnels more money to private schools and undercuts the aid that goes to the students who need it most” because the funding could have supported wealthy students.

This time around, Ms. Weingarten changed her tune.

In an interview, she defended her support of the provision, saying that it was different from previous efforts to fund private schools that she had protested under the Trump administration, which sought to carve out a more significant percentage of funding and use it to advance private school tuition vouchers. The new law also had more safeguards, she said, such as requiring that it be spent on poor students and stipulating that private schools not be reimbursed.

“The nonwealthy kids that are in parochial schools, their families don’t have means, and they’ve gone through Covid in the same way public school kids have,” Ms. Weingarten said.

Mr. Diament likened Mr. Schumer’s decision to Senator Edward M. Kennedy’s move more than a decade ago to include private schools in emergency relief funding if they served students displaced by Hurricane Katrina.

Mr. Diament said that he did not expect that private schools would see this as a precedent to seek other forms of funding.

“In emergency contexts, whether they’re hurricanes, earthquakes, or global pandemics, those are situations where we need to all be in this together,” he said. “Those are exceptional situations, and that’s how they should be treated.”

An affordable center-chimney Colonial in Glastonbury, CT, is the oldest property to hit the market this week on Realtor.com®.Offered at a steep … END_OF_DOCUMENT_TOKEN_TO_BE_REPLACED

Nissan was one of the early pioneers of the electric car. The Leaf has now sold over 600,000 units worldwide since its launch in 2011 and is still … END_OF_DOCUMENT_TOKEN_TO_BE_REPLACED

RUDNE, Ukraine — Yurii Brukhal, an electrician by trade, didn’t have a very dangerous role when he volunteered for Ukraine’s territorial defense … END_OF_DOCUMENT_TOKEN_TO_BE_REPLACED