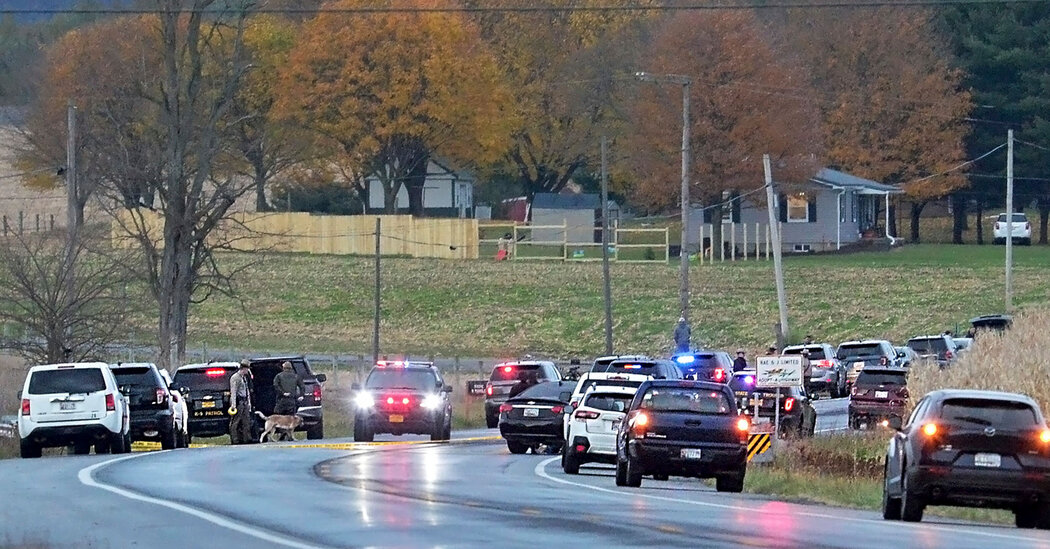 For four days, Maryland police had been searching for a former Baltimore County police officer and a female accomplice who they said had kidnapped the officer’s young daughters and gone on to commit several other crimes, including carjacking and robbery.

On Thursday afternoon, Pennsylvania state troopers attempted to stop a gray Ford Edge near the Maryland border that matched one in which the suspects had been traveling, Elena Russo, a spokeswoman for the Maryland State Police, said at a news conference on Thursday night.

The vehicle veered off the highway and struck a culvert in Smithsburg, Md. A crisis-negotiation team from the Maryland State Police tried to talk to those inside the vehicle, but received no response, she said. A “thick layer of smoke” in the vehicle obscured what was happening inside, Ms. Russo said.

Inside the vehicle, the police found two adults and two children who had all been shot in what the police described as an “apparent murder-suicide.” Three of them were dead. One of the children was taken to a hospital and was later pronounced dead, Ms. Russo said.

The Baltimore Sun identified the woman as Mr. Vicosa’s estranged wife and the mother of the two children.

On Wednesday, Mr. Vicosa and Ms. Bynum, a suspended Baltimore County police sergeant, were believed to have forced a man to drive them to several locations in the Baltimore area before releasing him unharmed.

The Baltimore Sun reported that Mr. Vicosa had been fired three months ago. It was unclear on Thursday night why Ms. Bynum had been suspended.

Many property purchasers in Alaska possess the same vision: Either hunker down away from the madding crowds in a refined log cabin or operate a … END_OF_DOCUMENT_TOKEN_TO_BE_REPLACED

YORK, England — Pints in hand, a group of men sat hunched over chessboards under the sloping ceiling beams of the Eagle and Child pub in York, in … END_OF_DOCUMENT_TOKEN_TO_BE_REPLACED