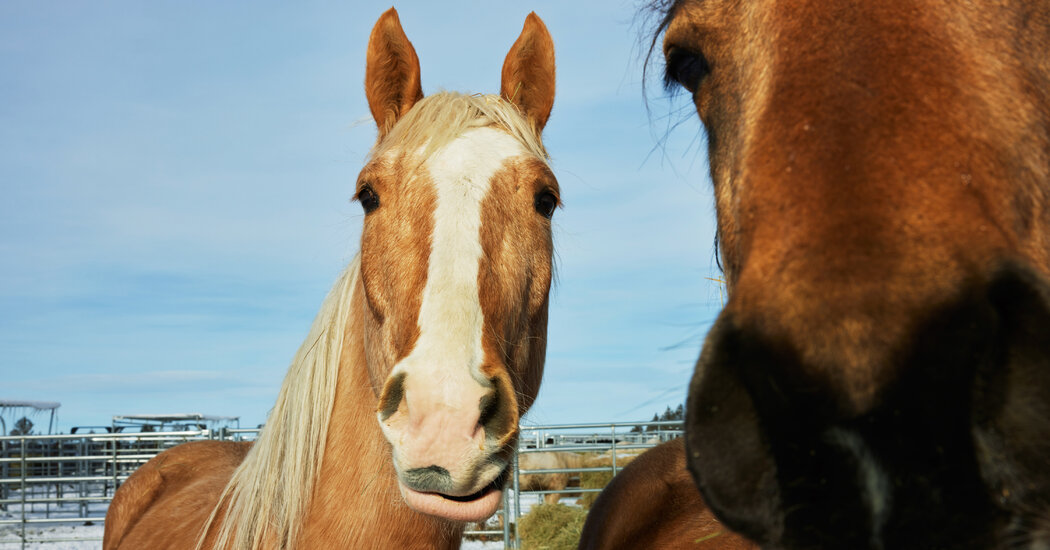 The Devil’s Garden Colt Challenge offers a solution to California’s overpopulation of mustangs.

ALTURAS, Calif. — The young mustangs cantered restlessly in the snow around Double Devil Wild Horse Corrals in December, their coats thick and unkempt.

Several months earlier, they were born in the rugged, arid grasslands of the Devil’s Garden Plateau in the Modoc National Forest, a remote corner of Northern California that bears little resemblance to the beaches and cities most people know.

The mustangs cut striking figures as they galloped across the wide-open lands, descendants of horses that once proved useful to the U.S. cavalry and farmers. But more than a century of largely unchecked reproduction has led to a population explosion well beyond what the land and residents can tolerate.

The colt challenge aims to attract a wide range of young equine enthusiasts — from horse novices to those who have grown up caring for the animals.

a source of tension and frustration. The region’s cattle ranchers bristle at the strict rules that govern when they can allow cattle to graze on federal land and for how long, while wild horses can roam freely and chew up grass.

“The horses are just wherever they want to be,” said Zack Hannah, a cattle rancher who watched his daughter dart around the livestock show. “It’s not only wrecking the county,” he added, but the horses are often undernourished when they’re living in the wild.

But Mr. Hannah praised the colt challenge for not only reducing the horse population but getting more young people across the state interested in ranching or other agricultural industries.

Wild Free-Roaming Horses and Burros Act was passed in 1971.

The law requires federal agencies to protect and manage the feral horse population, which doesn’t have natural predators, on public lands. To do that, federal land managers operate corrals similar to no-kill animal shelters in urban areas by trying to place the mustangs in good homes.

Ms. Snell said that an array of programs over roughly 30 years have sought to pair wild horses with willing trainers, including students and prison inmates. But Ms. Snell said that it was unusual for programs to allow participants to adopt the animals outright, as the colt challenge does.

By 2016, there were some 4,000 horses on the Devil’s Garden Plateau alone, an area that experts determined could sustainably support only 400.

“We’re seeing the highest numbers we’ve ever had,” Ms. Snell said. “There’s a real need to think outside the box.”

When the colt challenge finally arrived in June, rain intermittently sprinkled on the horses.The children whispered last-minute instructions to their mustangs, patted their noses and fed them carrots.

“I’m feeling good,” said Kati Hallmark, 14, a seasoned livestock show participant who trained a Devil’s Garden colt named Walker. “I think he is, too. His ears were forward, so he’s alert.”

Cliff Thomas, volunteering as a judge, walked the obstacle course with his grandson.

Mr. Thomas said he saw the program as a desperately needed corrective to a decline in youth participation in horse culture.

One by one, the 19 competitors whose families were able to bring them back to Modoc County coaxed their horses around the ring.

Ben watched with a slight frown.

“If you’re confident, he’ll be confident,” his mother said. “Just be patient.”

In the ring, Mason Sedillo, a 10-year-old, led his horse, Sassy Llama, to a tarp meant to mimic a small stream. She balked.

“I’m so proud of you,” Joshua told Mason throwing an arm around his friend’s shoulder.

Some young trainers exited the ring teary-eyed. Kati tried several times to lead Walker through a tunnel of dangling pool noodles, clicking her tongue and quietly coaxing him, to no avail. Mr. Thomas nodded at her to move on.

“It was a learning experience, for sure,” she said later. “I worked so hard, but he put his whole entire body weight against me.”

At one point, Buddy reared back as Ben tried to urge him forward. Buddy stood stock still at the edge of the ramp into the trailer. Ben, shorter and smaller than his equine companion, took deep breaths, a frown fixing itself on his face as he tried to move an animal that would not budge.

“To see the kids with a young horse and trying to do an obstacle course is just like life,” Mr. Thomas said as the competition came to a close. “They got to see how they deal with the frustrations and the challenges.”

At the end of the day, Ms. Snell handed out awards, and no one left empty-handed. Ben joined a row of five children in his age group to accept a yellow fourth-place ribbon and a bag of Purina. His parents smiled and clapped.

The next morning, Kati woke up at her family’s sprawling ranch outside of town. The day before had been disappointing. But just like every other day, she got up and headed toward the red barn where the animals lived. She cleaned the stalls. She fed the horses. Walker munched happily on hay.

Hometown Deli, Paulsboro, N.J.Mike Calia | CNBCThree men were charged with fraud and other crimes in a scheme involving a company that was worth $100 … END_OF_DOCUMENT_TOKEN_TO_BE_REPLACED

The childhood home of "The Morning Show" actor Nestor Carbonell recently hit the market in Greenwich, CT, for $4.4 million.Fans will appreciate that … END_OF_DOCUMENT_TOKEN_TO_BE_REPLACED