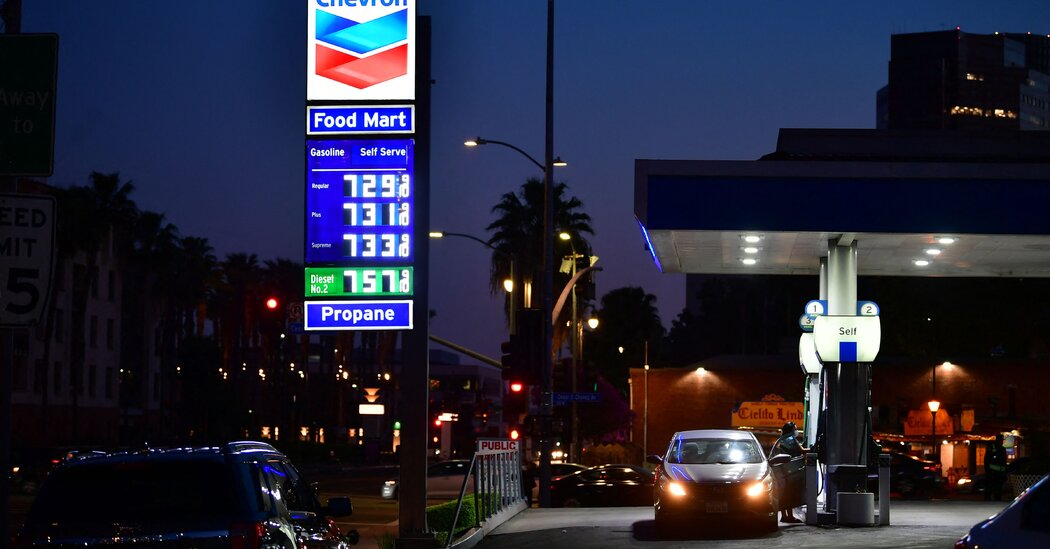 Seeking to soften the blow of higher gas prices on consumers, a handful of states have suspended their gas taxes, and several other states may soon follow.

Gas prices, which had already been climbing during the pandemic, rose to new highs in recent weeks in part because the war in Ukraine led to more volatility in the energy market. The average cost of gas in the United States hit a record high on March 11 at $4.33 per gallon, according to AAA. Although that number has since declined to an average of $4.24 per gallon, it is still 18 percent higher than it was last month and 48 percent more than it was a year ago.

Some states are using budget surpluses from federal pandemic aid and increased tax revenue to cover the cost of suspending gas taxes for the next several weeks or months. Others are also considering pausing fares for public transportation.

On March 18, Gov. Larry Hogan of Maryland announced that the state would suspend its tax of 36.1 cents per gallon for gasoline, and its slightly higher tax for diesel fuel, for the next 30 days, a measure that will cost the state $100 million.

signed a bill suspending the state’s gas tax until May 31. On March 24, Gov. Ned Lamont of Connecticut announced that his state would temporarily suspended the 25 cents per gallon excise tax — as well as fares needed to ride a public bus — from April 1 to June 30.

Officials in other states are considering similar measures.

In Ohio, where gas prices have risen 21 percent over the past month, Republican lawmakers are considering a gas tax cut that would cost up to $4 billion over the next five years.

In West Virginia, a group of Democratic lawmakers is calling on the governor to suspend gas prices for the next month. And in California, Gov. Gavin Newsom proposed an $11 billion relief package that would pause the state’s gas tax and provide free public transportation to residents.

The average price of gas in California is $5.91, one of the highest in the country, compared with $4.82 a month ago, according to AAA. Mr. Newsom said the state needed to respond because of the price spikes that he said stemmed from the actions of President Vladimir V. Putin of Russia.

“We’re taking immediate action to get money directly into the pockets of Californians who are facing higher gas prices as a direct result of Putin’s invasion of Ukraine,” Mr. Newson said in a news release.

But while many officials have embraced this kind of legislation, some experts say that a temporary reprieve from state gas taxes is an ill-conceived fix that will only hurt Americans in the long run.

The relief could provide a respite for drivers, and help lower shipping costs for foods, but the moves do not address other people or problems affected by inflation, they argue.

“This is primarily concentrated on drivers, and therefore doesn’t provide broader relief from all of the inflation-induced price increase,” said Jared Walczak, vice president of state projects at the Center for State Tax Policy, part of the nonprofit Tax Foundation.

Drivers could experience sticker shock once these temporary cuts end and prices revert to normal, he added.

“Even though it will provide some relief at the pump, it’s ultimately a fairly gimmicky way of providing relief at a time when consumers are facing higher prices across the board,” Mr. Walczak said.

AUSTIN, Texas--(BUSINESS WIRE)--As the first multifamily management company to be recognized in the Public Relations and Marketing Excellence Awards, … END_OF_DOCUMENT_TOKEN_TO_BE_REPLACED

There have been whispers of cooling housing and rental prices in the San Francisco Bay Area, but that hasn't yet translated into practical, noticeable … END_OF_DOCUMENT_TOKEN_TO_BE_REPLACED

Cars pass in Independence Square at twilight in Kyiv, Ukraine, Monday, Oct. 31, 2022. Rolling ... [+] blackouts are increasing across Ukraine as the … END_OF_DOCUMENT_TOKEN_TO_BE_REPLACED