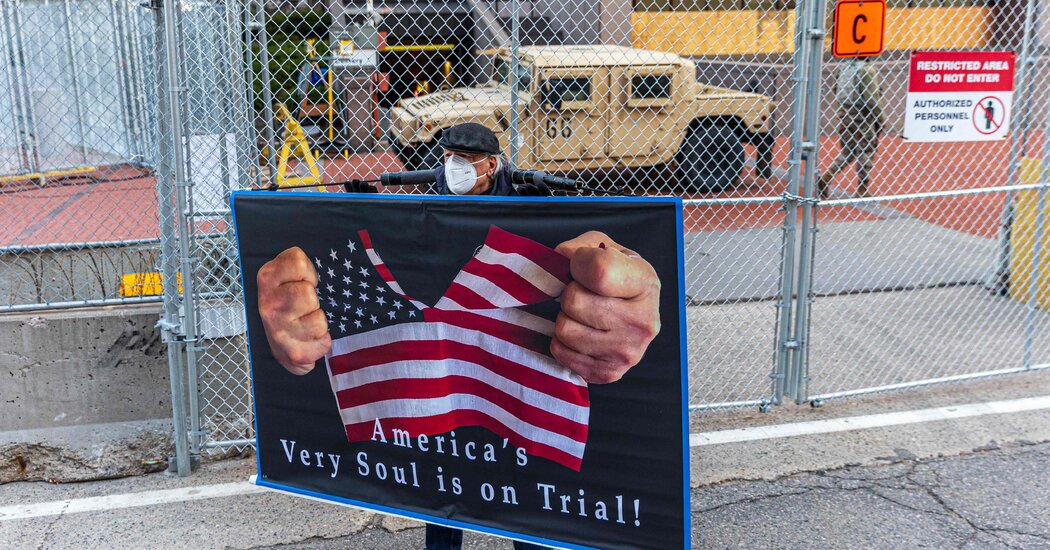 As the trial of Derek Chauvin began on Monday, local news channels were airing gavel-to-gavel coverage, while groups of protesters gathered on the streets demanding justice.

At the intersection in South Minneapolis where George Floyd died that is now known as George Floyd Square, people sat around a bonfire, discussing what would be unfolding a few miles away in the courtroom where Mr. Chauvin, the former police officer charged with murder in Mr. Floyd’s death, is on trial.

One woman said the value of Black life was on trial.

“Whiteness is on trial,” another woman shot back. “I am tired of Black bodies being the fulcrum of change in this country.”

It was a subdued gathering, with people drinking coffee that had been offered. Some people watched the proceedings from the trial on their phones. Others were walking through the memorial, some taking photos and selfies.

Before the trial began, members of Mr. Floyd’s family joined the Rev. Al Sharpton and Ben Crump, a lawyer for their family, for a news conference and protest outside the courthouse, taking a knee for over nine minutes in recognition of the approximate amount of time that Mr. Chauvin knelt on Mr. Floyd’s neck that day in May.

On Sunday night, the family had gathered for a prayer vigil at a church, placing the trial in the context of America’s long history of racism. Mr. Crump called the trial “a seminal moment in American history.”

“I believe in my heart of hearts,” he said, “that George Floyd will achieve something rare that most Black families never achieve in America and that is full justice.”

Phil Shell loves the Bay Area and its real estate market. He’s been building his career here as an agent over the past eight years, but even he hasn’t … END_OF_DOCUMENT_TOKEN_TO_BE_REPLACED

DS4 Cross DS The Plug-in hybrid seems the perfect answer to the electric car dilemma; battery power for all your local needs and a traditional motor … END_OF_DOCUMENT_TOKEN_TO_BE_REPLACED