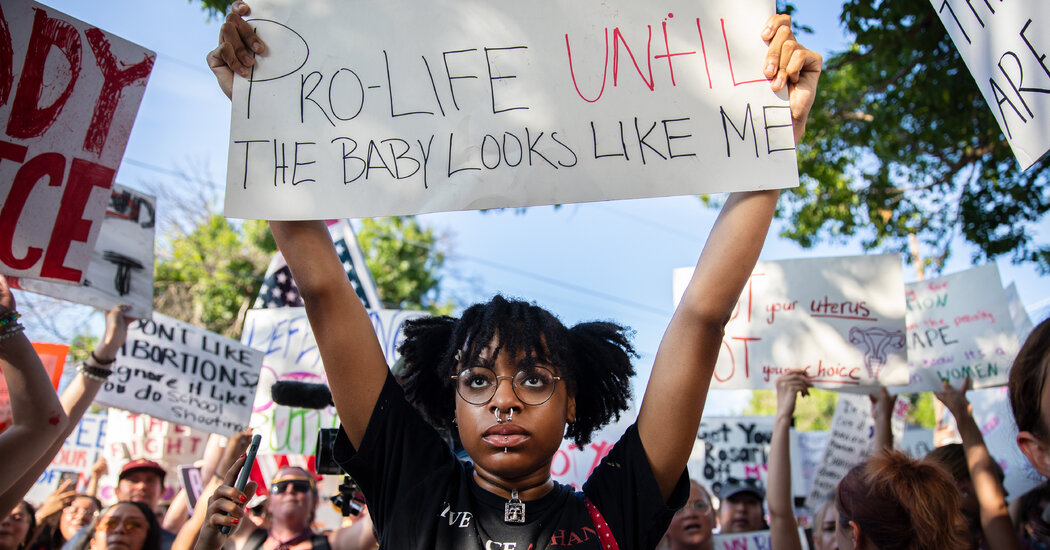 A state-by-state legal battle in the wake of the Supreme Court’s abortion ruling widened on Tuesday as a judge in Texas temporarily blocked a statewide abortion ban, a federal court let Tennessee tighten existing restrictions, Iowa Republicans said they would ask courts to clear the way for a ban from the moment fetal cardiac activity could be detected, and Wisconsin Democrats announced they were filing suit to halt the resurrection of abortion laws dating to the 19th century.

The actions came as Americans absorbed last week’s watershed decision to reverse Roe v. Wade, ending a half-century-old constitutional right to abortion. Since then, roughly half of states have sought to outlaw or considerably restrict the procedure while others have sought to bolster abortion rights.

A blizzard of litigation has ensued, mostly from abortion rights groups seeking to block new bans with the argument that they are vague or violate state constitutions, or to prevent old bans from going into effect by arguing that they are antiquated. On Monday, advocates persuaded judges in Louisiana and Utah to temporarily block enforcement of so-called trigger laws that were timed to ban abortion as soon as the Supreme Court reversed Roe. Similar lawsuits are pending in Arizona, Kentucky, Mississippi and Idaho.

clinics argued that it had been repealed “by implication” after Roe and that it conflicts with a trigger law slated to take effect in a matter of weeks.

In Iowa, Gov. Kim Reynolds and legislative leaders said they would ask a state court to reinstate a previously blocked law — similar to Tennessee’s — that bans abortions as soon as fetal cardiac activity can be detected. The governor said that outside counsel, rather than Attorney General Tom Miller, would represent the state pro bono. Mr. Miller, a Democrat, said on Tuesday that he could not “zealously” defend the law, which he felt would undermine women’s protections and rights, and was withdrawing his office from the case.

In Wisconsin, Gov. Tony Evers authorized his attorney general to sue the state’s Legislature to remove a pre-Roe abortion ban from the 1800s, going beyond his initial promise to grant clemency to doctors violating that same law.

The Texas and Tennessee decisions maintained access to abortion in those states through about the sixth week of pregnancy — a deadline that often has passed by the time many women realize they are pregnant.

abortion providers could now be prosecuted under it.

Tuesday’s ruling means that abortions can resume in Texas in the near term, to the extent that the law allows them. Even before last week’s Supreme Court decision, the state permitted abortions only up to about six weeks of pregnancy.

“The judge’s decision is wrong,” Mr. Paxton tweeted on Tuesday. “I’m appealing. I’ll ensure we have all the legal tools to keep TX pro-life!”

The restraining order is “very narrow,” Kim Schwartz, a spokeswoman for the anti-abortion group Texas Right to Life, said. The protection applies only to the providers listed in the lawsuit and does not account for all Texas laws that could be grounds for prosecuting abortion.

The American Civil Liberties Union and health care providers had sought the delay, arguing that the old law had not been enforced in nearly a half-century. The judge set a hearing for July 12 to consider a more permanent injunction.

trigger ban, written before the court ruling. That ban, which makes exceptions to save the life of the mother or prevent “substantial impairment of major bodily function,” is set to take effect in a few weeks.

After the trigger ban takes effect, abortion in Texas will be outlawed from the point of fertilization. Women who get abortions will not be prosecuted, but doctors who perform the procedure will face potential sentences of up to life in prison or fines of up to $100,000.

MIAMI--(BUSINESS WIRE)--Intelli Smart Homes, the leading smart home technology company, has been recognized as one of America’s fastest-growing … END_OF_DOCUMENT_TOKEN_TO_BE_REPLACED

Customers outside a Walmart store in Torrance, California, US, on Sunday, May 15, 2022. Walmart Inc. is scheduled to release earnings figures on May … END_OF_DOCUMENT_TOKEN_TO_BE_REPLACED

The past few years have been brutal on homebuyers' budgets. Would-be buyers have been priced out of some of the most desirable neighborhoods thanks to … END_OF_DOCUMENT_TOKEN_TO_BE_REPLACED