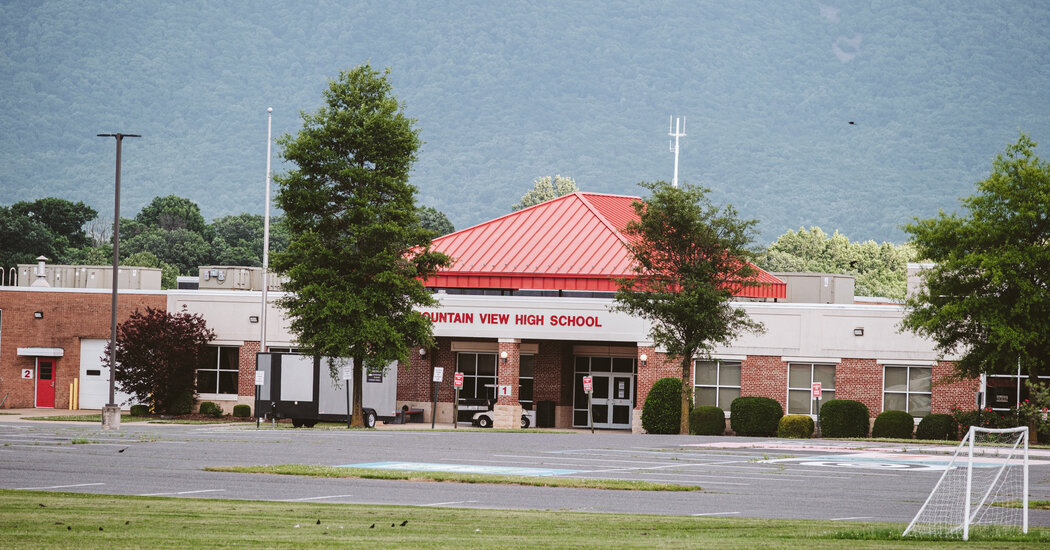 WOODSTOCK, Va. — It was getting late, well past 10 p.m., when the Shenandoah County School Board finally got around to the question that had been hanging over the county for two long and exhausting years. Should Stonewall Jackson return?

“Discussion,” Marty Helsley, the chairman of the board, announced wearily. “Who wants to go first?”

Two years ago, in a summer ringing with nationwide protests and marches, the country seemed on the verge of sweeping change. Governments from statehouses to city councils publicly resolved to address long overlooked racist legacies, as policies and monuments that seemed permanent were quickly toppled.

But change itself is volatile. A political backlash formed almost immediately and newly elected officials set to work undoing the rapid transformations of 2020. School boards throughout the country have rescinded policies that put an emphasis on addressing racism, and dozens of states have introduced measures that would restrict how race and history are taught. Glenn Youngkin, elected last year as governor of Virginia, fulfilled a campaign promise on his first day in office by ordering an end to the teaching of “inherently divisive concepts” in schools.

massive resistance” to school integration. It was desegregated several years later, though there have rarely been many more than a half-dozen Black students at a time. Over the decades, the Confederate imagery that pervaded Stonewall — the flags, the emblems, the mascot on horseback — was slowly chipped away.

urged schools to get rid of Confederate names, and in rapid succession, many did.

Things had been relatively quiet on that front in Shenandoah County until the afternoon of July 4, when an item showed up on the agenda for the school board’s upcoming meeting: “school names.” Groups immediately formed on Facebook and petitions circulated, eventually gathering about 2,000 signatures in favor of changing the names and 4,000 against. On July 9, at a virtual meeting, the board voted, 5-1, to retire the names of the elementary school, Ashby-Lee — the names of two Confederate officers — and of the high school, Stonewall Jackson.

The fury was immediate. Outraged Stonewall alumni packed school board meetings; a major donor to the school threatened to stop giving money; a member of the county’s Board of Supervisors sued to undo the decision and filed a petition to remove the board president. Family members stopped speaking. People were yelled at in the farmers’ market.

To opponents of the change, the whole thing was an affront to democracy.

“It was the sneakiness,” said Renee Hawkins, 50, a Stonewall Jackson graduate. She and others filed a barrage of public records requests, uncovering discussions leading up to the vote among board members, some of whom, Ms. Hawkins and others said, had denied their intentions just days beforehand. “For 50 years, people went to this school and never had a problem with the name.”

cancel culture” and the “era of political indoctrination,” and at a meeting in May, the board revived the matter of the names.

“It’s been two years!” shouted Mr. Helsley, sitting in his work clothes at a local V.F.W. post on the eve of Thursday’s vote. A fourth-generation dairy farmer and former middle school science teacher, Mr. Helsley was the “no” vote in 2020. He has nothing good to say about that decision-making process, calling it the worst course of action the board had ever taken.

“The name was there for 60 years, they took it down in two weeks,” he said. They should have engaged with the public, he said, come up with a protocol, at least slowed it down. “Empathy!” he cried. “They showed none.”

With the election of the new board members, Mr. Helsley was seen as the deciding vote to bring Stonewall Jackson back. But once a hero to the people he calls “the right wingers,” he became a target when his current intentions were made clear. “Nothing good will come of putting it back,” he said. He raised the hypotheticals of a Black student teacher coming to the school or Black basketball players arriving for a game in the gym. How would they feel if Stonewall Jackson was brought back?

At the school board meeting on Thursday night, the public comments ran long as usual. Current students spoke, along with people who had graduated decades ago. Alumni from the Stonewall years praised the general as a local hero, “a symbol of American grit and determination,” as one board member described him. Others sermonized about democracy and the will of the people, accusing the previous board of sowing division where there was none.

“It’s the board’s responsibility to show these kids how democracy is supposed to work,” said Stuart Didiwack, who announced that his family had “lived, worked and paid taxes” in the county for 256 years. “Show them that the wishes of the majority are carried out by those they elected to represent them. If you vote against the wishes of the people you represent, you must be willing to live with the consequences.”

Cynthia Walsh, one of the two members remaining on the board who had voted for the change in 2020, said a key obligation of a school board was making sure all students felt welcome. She argued that sometimes that could take precedence over the will of parents. “Sometimes we have to make difficult and unpopular decisions on behalf of all of the students,” she said as the evening grew late. “If we are only ever going to listen to the majority, when does the minority ever get represented?”

Among the supporters of the original name change, a side that appeared to be outnumbered at Thursday’s meeting, were several Black graduates of Stonewall, from multiple decades. Some winced when white speakers said they had never heard anyone complain about the name; nobody heard, they said, because nobody asked.

“I went to Stonewall, graduated in 1968, I have not set foot back on that ground since then,” said Ann Keels, who had moved back to the county after 45 years away. “I did go by that school to see if the name was changed,” she said. “I took a picture of it.”

The board members gave their speeches, including Mr. Helsley, who broke down in tears. Then it was time for a vote.

Everyone knew it was not over. There is a school board election next year. “The names will be restored,” one of the speakers said. “All we need is one seat.”

Ms. Steptoe, from the class of 1981, knew this was probably true. But she said it would be better than if the name had never changed at all. She had never thought this was possible, not in Shenandoah County, she said, and here it had happened. “Even if only for a minute,” she said.

Kohl's announced Friday that it is terminating talks to sell its business, saying that retail environment has significantly deteriorated since the … END_OF_DOCUMENT_TOKEN_TO_BE_REPLACED