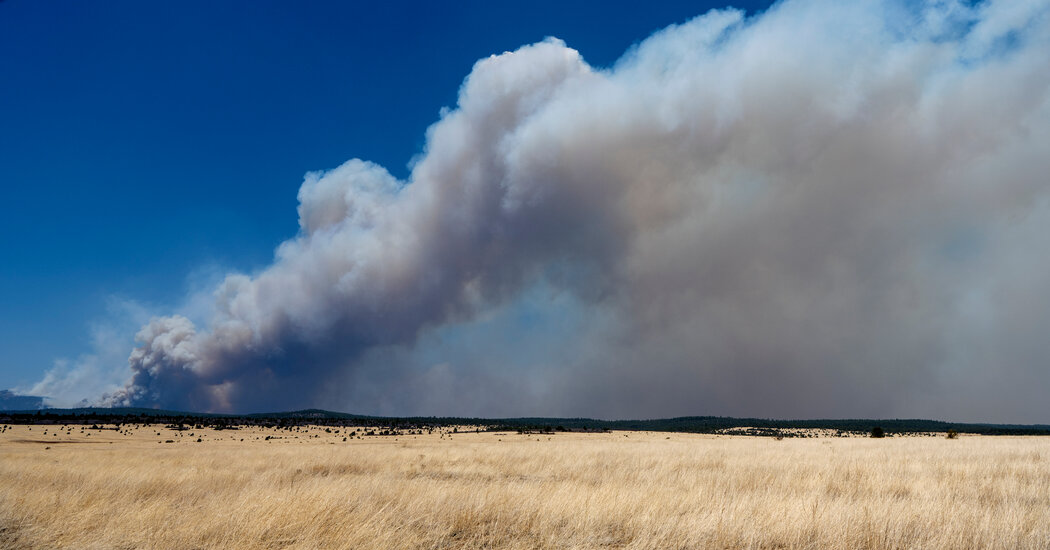 SANTA FE, N.M. — High winds in northern New Mexico on Sunday once again posed a stiff challenge to crews battling a large wildfire that grew significantly over the weekend.

The Hermits Peak/Calf Canyon fire east of Santa Fe, which began as two fires before merging a week ago, had burned almost 104,000 acres, or more than 160 square miles, by Sunday, up from about 75,000 acres on Friday. It was 30 percent contained, fire officials said, with smoke from that fire and another — the Cerro Pelado fire in Jemez Springs, roughly 40 miles west of Santa Fe — permeating much of the northern part of the state.

More than 1,000 firefighters have worked to contain the Hermits Peak/Calf Canyon blaze. The spread of the fire from Friday into Saturday exceeded predictions, officials said in public briefings. Wind speeds exceeded 65 miles per hour at times, according to Mike Johnson, a fire information officer. On Sunday, wind gusts of up to 45 m.p.h. were expected, and “extreme fire behavior” was possible over the next two days, according to InciWeb, a government website that tracks wildfires.

No deaths or injuries have been reported from the fire. The state police reported the deaths of two people in April from another wildfire.

Carl Schwope, the commander of a team for the region that combines firefighting resources from federal, state, local and other agencies, said on Saturday that the Hermits Peak/Calf Canyon fire “could easily double in size” before being contained.

Mr. Schwope also urged residents to be on alert for more evacuation announcements. According to Mr. Johnson, about 6,000 people from 32 communities in the vicinity of the Hermits Peak/Calf Canyon Fire, some in rural mountain areas, were already under orders to leave.

Monica Aragon left her house in Ledoux, a small community northeast of Santa Fe, on April 22 and has returned just once. She and her two children have been staying with her parents in Chimayo, about 60 miles from her home.

On Friday, she said, she received a call from a volunteer firefighter describing the situation. He said he did not want her to panic, but that the fire had reached the road in front of her house. Firefighters were “keeping it away from your home,” she recalled him saying.

Because of the ongoing danger, county officials have been unable to provide a full accounting of how many structures have been destroyed or damaged. But Joy Ansley, the county manager for San Miguel County, said that before the Hermits Peak/Calf Canyon fire expanded on Friday, it had destroyed 200 structures.

Roger Montoya, a New Mexico state representative whose district includes three counties currently being affected by fires, spent time last week with a team delivering food and other supplies to residents who had not yet left. Some were without electricity, he said.

“There’s a reluctance for individuals to leave their homes,” he said.

Samuel Coca, the general manager of a bar in the Castañeda Hotel in Las Vegas, N.M., said he had three vehicles packed with belongings in case he and his family needed to leave.

As the fire grew Friday, along with the number of people leaving their homes, his bar began providing free buffet dinners for firefighters and evacuees. Many people left home with the clothes they were wearing and not much else, he added.

“The first dozen people I spoke with lost everything,” Mr. Coca said. “They lost their houses, their ranches, some livestock. It was hard to get through the afternoon without crying.”

It’s a property that offers a unique open floor plan—plus a hot tub with a view.“It was a Methodist church located in a historic little area of St. … END_OF_DOCUMENT_TOKEN_TO_BE_REPLACED