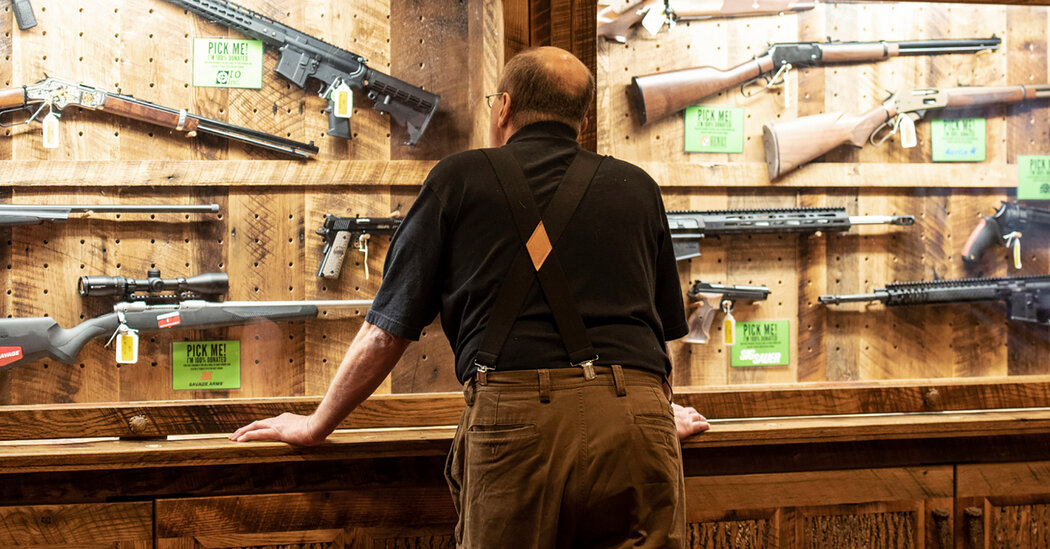 WASHINGTON — The Supreme Court said on Monday that it would review a New York law that imposes strict limits on carrying guns outside the home, setting the stage for its first major Second Amendment case in more than a decade.

The move came in the wake of a recent spate of mass shootings, which were followed by calls from President Biden and other Democrats for stricter restrictions on firearms.

The Supreme Court has turned down countless Second Amendment appeals since it established an individual right to keep guns in the home for self-defense in 2008 in District of Columbia v. Heller.

Since then, lower courts have generally sustained gun control laws. But they are divided on the fundamental and open question posed by the new case: whether states can stop law-abiding citizens from carrying guns outside their homes for self-defense unless they can satisfy the authorities that they have a good reason for doing so.

The new case is a challenge to a New York law that requires people seeking a license to carry a gun outside their homes to show a “proper cause.” Two men denied licenses, along with the New York State Rifle & Pistol Association, sued, saying “the state makes it virtually impossible for the ordinary law-abiding citizen to obtain a license.”

The precise question the Supreme Court agreed to answer was: “Whether the state’s denial of petitioners’ applications for concealed-carry licenses for self-defense violated the Second Amendment.”

Federal appeals courts have generally rejected challenges to such restrictions. In March, for instance, an 11-judge panel of the United States Court of Appeals for the Ninth Circuit, in San Francisco, upheld Hawaii’s law by a 7-to-4 vote.

Judge Jay S. Bybee, who was appointed by President George W. Bush, wrote for the majority.

In urging the Supreme Court not to hear the case from New York, New York State Rifle & Pistol Association Inc. v. Corlett, No. 20-843, Barbara D. Underwood, the state’s solicitor general, said its law required people seeking licenses to give an “actual and articulable” reason for needing to carry a gun, distinguishing it from the more restrictive Illinois and District of Columbia laws.

The Supreme Court’s most conservative members have long decried the court’s reluctance to explore the meaning and scope of the Second Amendment.

In 2017, Justice Clarence Thomas, joined by Justice Neil M. Gorsuch, wrote that they had detected “a distressing trend: the treatment of the Second Amendment as a disfavored right.”

“For those of us who work in marbled halls, guarded constantly by a vigilant and dedicated police force, the guarantees of the Second Amendment might seem antiquated and superfluous,” Justice Thomas wrote. “But the framers made a clear choice: They reserved to all Americans the right to bear arms for self-defense.”

In 2019, not long after Justice Kavanaugh’s arrival, the court agreed to hear a challenge to a New York City gun regulation that had allowed residents with so-called premises licenses to take their guns to one of seven shooting ranges in the city. But it prohibited them from taking their guns to second homes and shooting ranges outside the city, even when the guns were unloaded and locked in containers separate from ammunition.

dismissed the case as moot. In a concurring opinion, Justice Kavanaugh wrote that he was concerned that lower courts were not sufficiently sensitive to Second Amendment rights. “The court should address that issue soon,” he wrote.

In June, however, the court turned down some 10 appeals in Second Amendment cases. Since it takes only four votes to grant review, there is good reason to think that the court’s conservative wing, which at the time had five members, was unsure it could secure Chief Justice John G. Roberts Jr.’s vote.

MIAMI--(BUSINESS WIRE)--Intelli Smart Homes, the leading smart home technology company, has been recognized as one of America’s fastest-growing … END_OF_DOCUMENT_TOKEN_TO_BE_REPLACED

Customers outside a Walmart store in Torrance, California, US, on Sunday, May 15, 2022. Walmart Inc. is scheduled to release earnings figures on May … END_OF_DOCUMENT_TOKEN_TO_BE_REPLACED

The past few years have been brutal on homebuyers' budgets. Would-be buyers have been priced out of some of the most desirable neighborhoods thanks to … END_OF_DOCUMENT_TOKEN_TO_BE_REPLACED