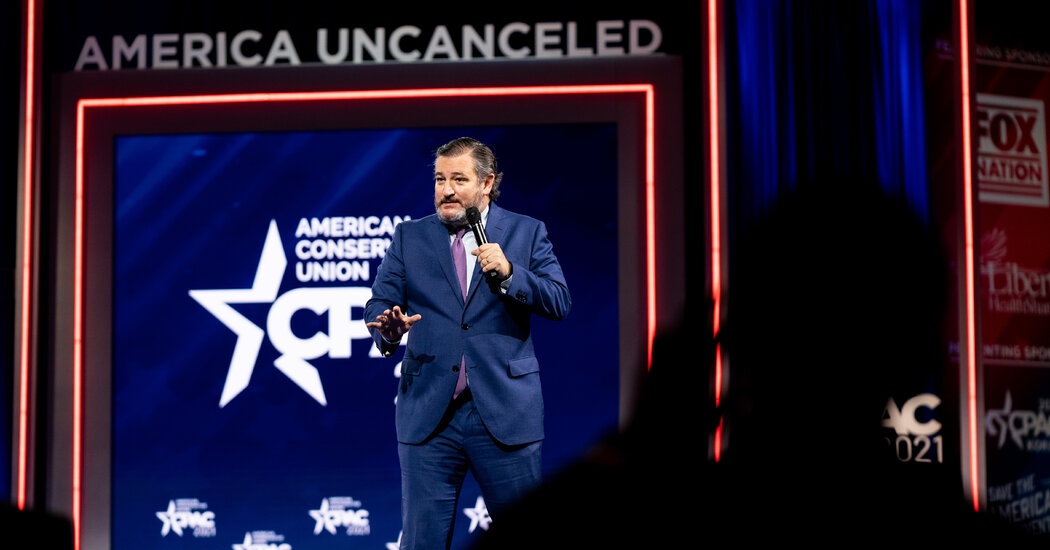 ORLANDO — Senator Ted Cruz has decided to own it.

Appearing at the Conservative Political Action Conference, known as CPAC, just days after he was caught fleeing to Mexico for a vacation in the midst of a deadly snowstorm in Texas, Mr. Cruz tried to make light of his lapse in judgment.

“I gotta say, Orlando is awesome,” he said while opening his speech. “It’s not as nice as Cancún — but it’s nice!”

Mr. Cruz, a potential candidate for the Republican presidential nomination in 2024, had been roundly criticized by prominent Democrats for abandoning his constituents in a time of strife. But here, the moment made for a winning laugh line.

Much of Mr. Cruz’s speech went this way, with the Texas senator, his voice at times sounding like a growl, entreating the left and the media to “lighten up” about many of the issues that have defined America in the past year.

Shortly before Mr. Cruz’s speech, CPAC organizers had been jeered by the audience when they paused the program to plead with them to wear their masks. Still, Mr. Cruz went ahead in making fun of pandemic-era rules like wearing masks in restaurants, and he also joked about the protests against police brutality that spread across major cities last summer, some becoming violent.

There had been no such demonstrations in Houston, he said, “because let’s be very clear: If there had been, they would have discovered what the people of Texas think about the Second Amendment and the right to bear arms.” The audience laughed.

Mr. Cruz, who had been scheduled to speak on the “Bill of Rights, Liberty, and Cancel Culture,” offered little by way of a positive vision for the future of the conservative movement. His speech reflected the general tenor of the event up to that point, with other speakers decrying the media and “cancel culture,” amplifying falsehoods about widespread voter fraud, and promising, above all, to “fight.”

But as Gov. Ron DeSantis of Florida appeared to suggest, this was the future of the movement. In his brief remarks to kick off the conference on Friday morning, Mr. DeSantis, another potential 2024 candidate, avowed that conservatives would never return to “the failed Republican establishment of yesteryear.”

“But the question is,” he added, “When the Klieg lights get hot, when the left comes after you: Will you stay strong, or will you fold?”

Mike Pompeo, the former secretary of state, and Gov. Kristi Noem of South Dakota will anchor the lineup on Saturday, and former President Donald J. Trump is scheduled to speak at 3:40 p.m. on Sunday, his first public speech since he left office under the cloud of a second impeachment.

Though Mr. Trump may well tease that he remains interested in running in 2024, the list of other prominent speakers includes many who hope to become the party’s standard-bearer: In addition to Mr. DeSantis and Mr. Cruz, they include Senators Tom Cotton of Arkansas, Rick Scott of Florida and Josh Hawley of Missouri.

But who isn’t speaking at CPAC this year is as telling as who is.

The most notable absence is former Vice President Mike Pence, who has kept a low profile since Jan. 6, when pro-Trump rioters called for his execution.

Also missing from the list is former Gov. Nikki Haley of South Carolina, another possible 2024 candidate, who served under Mr. Trump as ambassador to the United Nations and whose absence may signal an attempt to occupy a more moderate lane in the party in the years ahead.

When you think of Oscar winner Sandra Bullock, the first words that come to mind are probably not "organic farmer."But that's one of the many things … END_OF_DOCUMENT_TOKEN_TO_BE_REPLACED