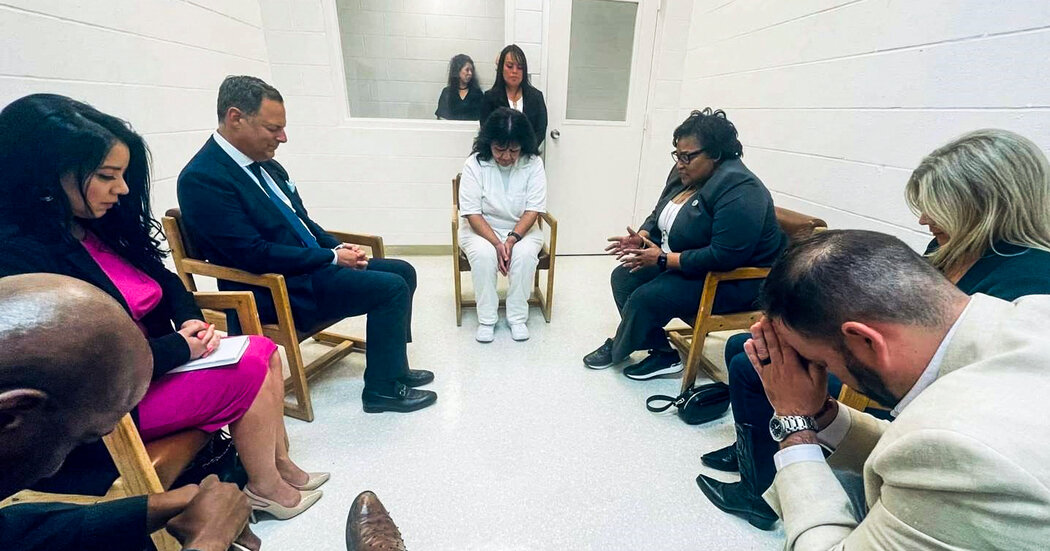 HOUSTON — The highest criminal court in Texas on Monday ordered a halt to the execution of a Hispanic mother of 14 convicted of killing her 2-year-old child more than a decade ago in a case that has drawn bipartisan outrage.

The mother, Melissa Lucio, has long maintained her innocence, and calls for leniency have become widespread in Texas, including among dozens of Democratic and Republican state legislators, as new evidence and expert testimony emerged that cast strong doubt on her guilt.

In a three-page decision ordering a stay to the execution that had been set for Wednesday, the Court of Criminal Appeals found that several of the claims raised by her lawyers needed to be considered by a trial court, including that prosecutors may have used false testimony, that previously unavailable scientific evidence could preclude her conviction and that prosecutors suppressed other evidence that would have been favorable to her.

The case now returns to a lower court to resolve those issues, postponing the execution indefinitely. Ms. Lucio would have been the first Hispanic woman executed in Texas.

The case had drawn national attention, including a documentary film, as lawyers for Ms. Lucio argued that evidence presented at trial undercut the case for murder in the death of her daughter, Mariah.

“I thank God for my life,” Ms. Lucio said in a statement released by her lawyers. “I am grateful the Court has given me the chance to live and prove my innocence. Mariah is in my heart today and always.”

Mariah died at home two days after what Ms. Lucio and her children have said was a fall down a flight of stairs as they were moving between apartments. An autopsy said the cause of death was blunt force trauma to the head.

Ms. Lucio was convicted of beating her daughter to death in part based on her own statements during a five-hour interrogation just after Mariah died in 2007.

Ms. Lucio’s lawyers challenged those statements, arguing that the apparent confession had been coerced, and presented expert testimony showing that the type of bruising seen on Mariah’s body, and the type of trauma that caused her death, could have been caused by the fall.

“Melissa is entitled to a new, fair trial,” said one of her lawyers, Tivon Schardl. “Texans should be grateful and proud that the Court of Criminal Appeals has given Melissa’s legal team the opportunity to present the new evidence of Melissa’s innocence to the Cameron County District Court.”

Ms. Lucio’s case was also before the Texas Board of Pardons and Paroles, which could grant clemency. But the board said Monday that because of the stay it would not be making a clemency recommendation “at this time.”

A sprawling waterfront compound on the eastern side of Lake Tahoe has hit the market for $55 million.Known as the Wovoka estate, it is owned by … END_OF_DOCUMENT_TOKEN_TO_BE_REPLACED

America is absorbing the shock of another bloody mass shooting, a day after an 18-year-old man wearing body armour and carrying assault rifles entered … END_OF_DOCUMENT_TOKEN_TO_BE_REPLACED