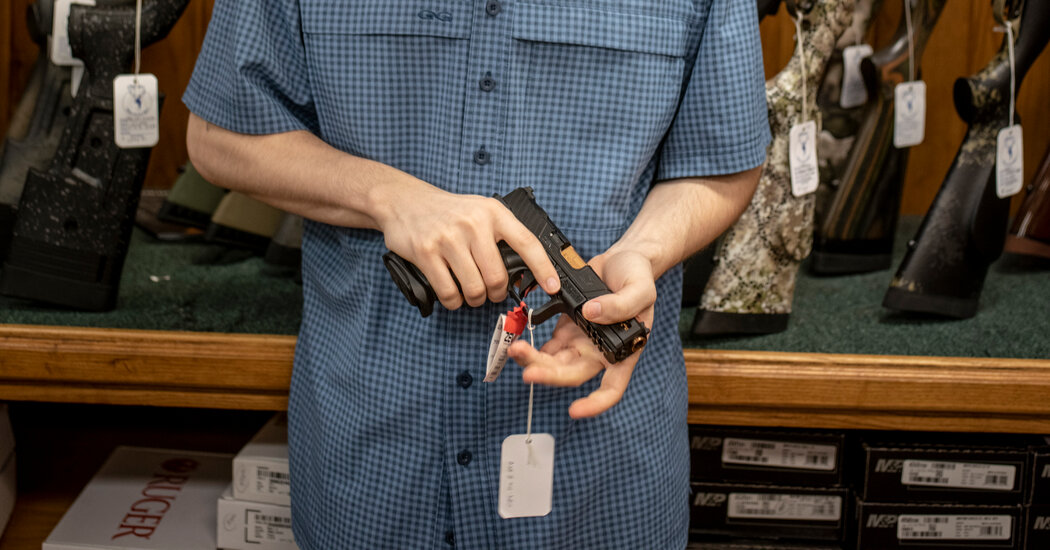 HOUSTON — Tony Earls hung his head before a row of television cameras, staring down, his life upended. Days before, Mr. Earls had pulled out his handgun and opened fire, hoping to strike a man who had just robbed him and his wife at an A.T.M. in Houston.

Instead, he struck Arlene Alvarez, a 9-year-old girl seated in a passing pickup, killing her.

“Is Mr. Earls licensed to carry?” a reporter asked during the February news conference, in which his lawyer spoke for him.

He didn’t need one, the lawyer replied. “Everything about that situation, we believe and contend, was justified under Texas law.” A grand jury later agreed, declining to indict Mr. Earls for any crime.

The shooting was part of what many sheriffs, police leaders and district attorneys in urban areas of Texas say has been an increase in people carrying weapons and in spur-of-the-moment gunfire in the year since the state began allowing most adults 21 or over to carry a handgun without a license.

from Maine to Arizona, will not require a license to carry a handgun.

The state-by-state legislative push has coincided with a federal judiciary that has increasingly ruled in favor of carrying guns and against state efforts to regulate them.

But Texas is the most populous state to do away with handgun permit requirements. Five of the nation’s 15 biggest cities are in Texas, making the permitless approach to handguns a new fact of life in urban areas to an extent not seen in other states.

national debate over crime. Researchers have long argued over the effect of allowing more people to legally own and carry guns. But a series of recent studies has found a link between laws that make it easier to carry a handgun and increases in crime, and some have raised the possibility that more guns in circulation lead to more thefts of weapons and to more shootings by the police.

“The weight of the evidence has shifted in the direction that more guns equals more crime,” said John J. Donohue III, a Stanford Law School professor and the author of several recent studies looking at gun regulations and crime.

Much of the research has been around the effects of making handgun licenses easier to obtain, part of what are known as right-to-carry laws, and Mr. Donohue cautioned that only limited data is available on laws that in most cases require no licenses at all.

“I think most people are reasoning by analogy: If you thought that right-to-carry was harmful, this will be worse,” he said.

But John R. Lott Jr., a longtime researcher whose 1998 book, “More Guns, Less Crime,” has been influential among proponents of gun rights, said the newer studies did not take into account differences between state handgun regulations that might account for increases in crime. He also pointed to some recent crime declines in Texas cities after the permitless carry law went into effect, and to what he saw as the importance of increasing lawful gun ownership in high-crime areas.

because of the benefits it affords, including the ability to carry a concealed handgun into a government meeting. But it is no longer necessary.

“Somebody could go into Academy Sporting Goods here in El Paso and purchase a handgun and walk out with it after their background check,” said Ryan Urrutia, a commander at the El Paso Sheriff’s office. “It really puts law enforcement at a disadvantage because it puts more guns on the street that can be used against us.”

The law still bars carrying a handgun for those convicted of a felony, who are intoxicated or committing another crime. In Harris County, criminal cases involving illegal weapons possession have sharply increased since the new law went into effect: 3,500 so far this year, as of the middle of October, versus 2,300 in all of 2021 and an average of about 1,000 cases in prior years going back to 2012.

“It’s shocking,” said Kim Ogg, the Harris County district attorney. “We’ve seen more carrying weapons, which by itself would be legal. But people are carrying the weapons while committing other crimes, and I’m not talking just about violent crimes. I’m talking about intoxication crimes or driving crimes or property crimes, carrying weapons on school property or in another prohibited place,” including bars and school grounds.

Her office provided a sampling of arrests in the last few weeks: a 21-year-old man carrying a pistol and a second magazine while walking through the grounds of an elementary school during school hours; a man jumping from his car and opening fire at the driver of Tesla in a fit of road rage; a woman, while helping her little brother into a car, turning to shoot at another woman after an argument over a social media video.

In the case of Mr. Earls, the man accused of fatally shooting 9-year-old Arlene Alvarez while shooting at a fleeing robber, Ms. Ogg’s office presented evidence to a grand jury of charges ranging from negligent homicide to murder. The grand jury rejected those charges.

A lawyer for Mr. Earls declined to make him available to comment. The man who robbed Mr. Earls and his wife remains unidentified, Ms. Ogg said.

In May, a committee of the Texas House heard testimony from gun rights advocates who praised the passage of permitless carry and argued that it may be time to go further.

Rachel Malone, of Gun Owners of America, outlined some of her group’s priorities for the next legislative session.

“I think it would be appropriate to move the age for permitless carry to 18,” she told the committee. “There’s really no reason why a legal adult should not be able to defend themselves.”

AUSTIN, Texas--(BUSINESS WIRE)--As the first multifamily management company to be recognized in the Public Relations and Marketing Excellence Awards, … END_OF_DOCUMENT_TOKEN_TO_BE_REPLACED

There have been whispers of cooling housing and rental prices in the San Francisco Bay Area, but that hasn't yet translated into practical, noticeable … END_OF_DOCUMENT_TOKEN_TO_BE_REPLACED

Cars pass in Independence Square at twilight in Kyiv, Ukraine, Monday, Oct. 31, 2022. Rolling ... [+] blackouts are increasing across Ukraine as the … END_OF_DOCUMENT_TOKEN_TO_BE_REPLACED