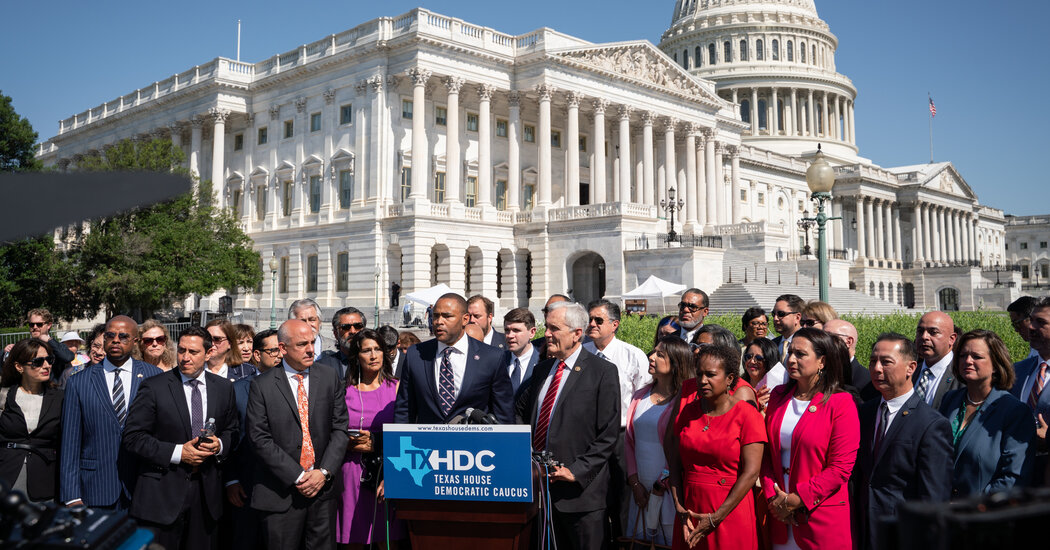 “We have got to get in to see Sinema,” said Jasmine Crockett, a state representative from Dallas.

To prevent Republicans from passing their election bill in the current special session, which began on July 8 and will last for 30 days, Democratic state representatives from Texas must stay out of the state for more than three weeks. After that, Mr. Abbott could call a new special session, which would leave Democrats grappling with whether to maintain their strategy and embark on another lengthy and costly excursion.

After former President Donald J. Trump returned in recent months to making false claims that the 2020 election was stolen from him, Republican lawmakers in many states have marched ahead to pass laws making it harder to vote and change how elections are run, frustrating Democrats and even some election officials in their own party.

The election overhaul legislation that Republicans have proposed is very similar to the bill the party originally introduced earlier this year, with a host of restrictions on voting that would most likely have a disproportionate impact on poorer communities and communities of color, especially in Harris County, the largest county in the state, which is trending Democratic.

The new bills, introduced in the State House and State Senate, include provisions aimed at Harris County, including bans on drive-through voting and 24-hour voting, two new voting methods that were pioneered by the county in last year’s election to help voters safely cast a ballot during the coronavirus pandemic and to expand in-person options for voters with irregular schedules. Nearly 140,000 voters in Harris County used one of the two methods in 2020.

The bills also include broad changes that will affect voters across the state, including new identification requirements for absentee ballots and a measure that prohibits election officials and third-party groups from proactively sending absentee ballot applications to voters who have not requested them.

Texas is one of about a dozen states that do not offer no-excuse absentee ballot voting; it allows only voters who are over 65 and those with a state-permitted excuse to vote absentee by mail. But in 2020, absentee ballots in Texas more than doubled compared with 2016, with roughly one million mail ballots cast in the election, according to a study by The Texas Tribune. Democrats outpaced Republicans in casting absentee ballots in 2020, which also represented a flip from 2016, according to The Tribune.

For voting rights groups and Democrats, some of the most worrying provisions in the Texas bills are ones that would greatly expand the authority and autonomy of partisan poll watchers. Originally meant to serve as an outside check on the electoral process for candidates and political parties, poll watchers have become increasingly aggressive in some states, including Texas.

That has raised fears among election officials and voting rights activists that poll watchers, as they have repeatedly in American elections over the years, will increasingly be used to intimidate voters and harass election workers, often in Democratic-leaning communities of color. During the 2020 election, President Donald J. Trump’s campaign repeatedly promoted its “army” of poll watchers as he implored supporters to venture into heavily Black and Latino cities and hunt for voter fraud.

Target has added new brands to its beauty department. At a growing number of stores, it also has mini Ulta Beauty shops with prestige brands.Melissa … END_OF_DOCUMENT_TOKEN_TO_BE_REPLACED

Just a few months ago, builders couldn't put homes up fast enough to appease the hordes of eager buyers. They boasted about lengthy waitlists, even … END_OF_DOCUMENT_TOKEN_TO_BE_REPLACED