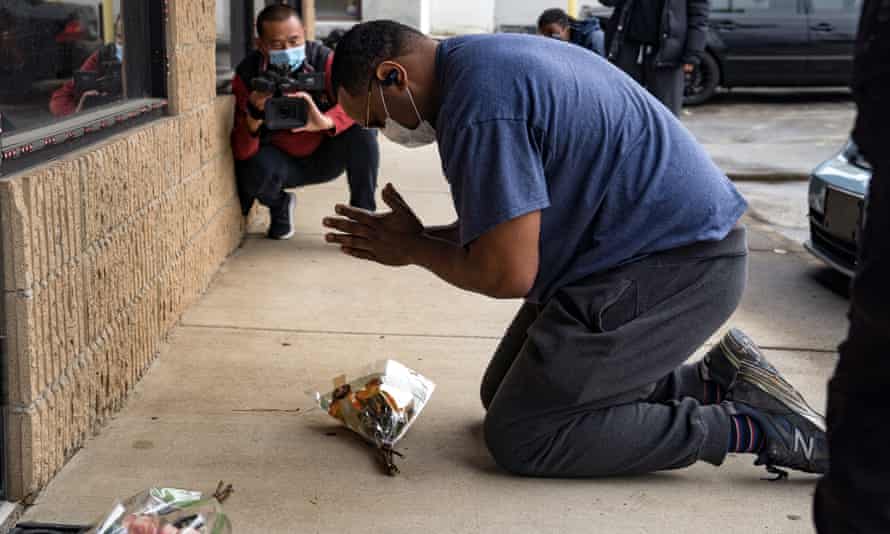 Christina Lee said her Vietnamese mother came to mind when she heard about the shootings at Aromatherapy Spa and Gold Spa in Atlanta on the night of 16 March.

“I’m thinking about my mom, who owned a nail salon at one point,” said Lee, a Georgia music and culture journalist. “These are the kinds of businesses that open up to people who are new to this country. And to learn that the victims were Korean, that hit home for me too because I’m half-Korean.”

In the area of Piedmont Avenue surrounding the two spas is near Atlanta’s Midtown district, the sky was dreary due to looming thunderstorms and the atmosphere was grim because of the killing of multiple Asian Americans the evening before in a shooting attack.

Spas in the rundown area, which has long functioned as something of a red-light district in Atlanta, locals told the Guardian, are landmarks of sorts.

Not far from Aromatherapy is another spa, ST Jame Spa, and a few steps beyond is an adult nightclub called Club Platinum.

There are clothing boutiques for exotic dancers and adult novelty shops pushing up against a recent boom of condominiums and fast casual restaurants. What was most noticeable on Wednesday were hastily-erected tents for local media dodging rainfall, and the remaining strips of yellow crime scene tape.

Lee, who normally creates podcasts in an office near the two spas, but has not been working there during the pandemic, said the shootings here took her by surprise, as the area is not known for a concentration of residents who identify with the Asian American or Pacific Island communities.

But it was the overarching prejudice toward Asians in general, regardless of their origins, which she feels is growing, that she said was most alarming.

“It doesn’t matter if they’re from Wuhan or not. It never seems to matter,” she said, referring to the Chinese city where the Covid-19 outbreak began.

The sentiment of solidarity was not exclusive to Asian Americans. When Atlanta native Yalaba Mendoza arrives on the scene, he exited his car with three flower bouquets: two bunches of white roses and one pink.

Mendoza, a tall, Black man, wearing sweatpants and a blue T-shirt that said “Y’all Need Jesus” in white lettering, left the flowers at the doors of both spas, crossing the street from Aromatherapy to Gold before stopping to comment on why he came today to pay his respects.

“For you to sit down and just pay attention, you see how tragic it is. We have to be consistent as a race of people. If it happens to an Asian person, it’s just like it happened to a Black person or a white person.”

There were few people on the streets on Wednesday morning. Whether for fear, respect for those killed so violently, the threat of tornadoes or all those reasons, it was hard to say.

But there was a heavy silence on the normally busy commercial strip.

In the early weeks of Covid-19 vaccinations, the shining examples of success were all places with politically conservative leaders. Globally, the … END_OF_DOCUMENT_TOKEN_TO_BE_REPLACED