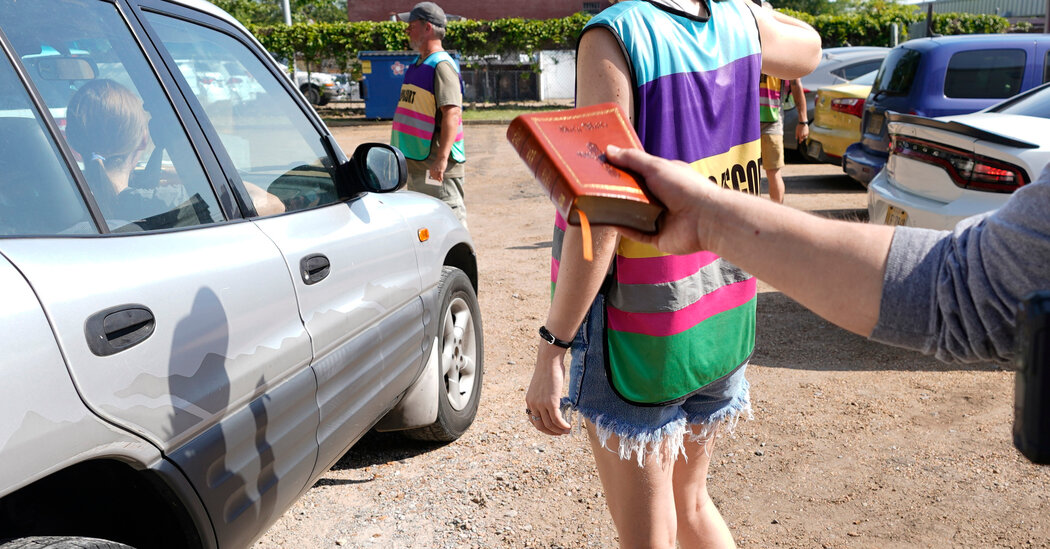 JACKSON, Miss. — A young woman entered the parking lot of the only abortion clinic in Mississippi, her shoulders hunched. She was accompanied by an older woman and a stone-faced young man with a handgun on his hip. She appeared terrified.

All around them, the noise was deafening. It was early Saturday morning, and a man with a powerful P.A. system was preaching about Jezebel being eaten by dogs. Dozens of evangelical Christians had come to pray. Volunteer clinic escorts, sweating in the summer heat, directed patients’ cars through the throng and blasted music they thought the evangelicals would hate: At the moment, it was the cheeky alt-rock song “Stacy’s Mom.” Posters of aborted fetuses lined the street.

A pastor named Doug Lane huddled with the older woman and encouraged her to persuade the younger woman not to go through with the procedure. “I wanted her to have the baby,” the woman said, her voice unsteady.

poorest state travel to places where the procedure will remain legal. Similar efforts are underway across much of the country, in states where abortion will now be forbidden and in places hoping to accommodate out-of-state women in need.

in nine states since Friday’s ruling in Dobbs v. Jackson Women’s Health Organization, with at least 12 more bans or restrictions, including in Mississippi, expected to take effect soon. Though it was a Mississippi law that sought to restrict abortion at 15 weeks that was at issue in Dobbs, the state also has a so-called trigger law, passed in 2007, that fully bans abortion, except in cases of rape or risk to the mother’s life.

hailed the decision as “a victory, not only for women and children, but for the court itself.”

posted a tweet saying that after the decision, government should strive to pass “laws that empower women,” including an overhaul of child support, child care and workplace policies.

That same day, the three dissenting justices in the Dobbs case — Stephen Breyer, Sonia Sotomayor and Elena Kagan — enumerated the many ways in which Mississippi has fallen short, with the highest infant mortality rate in the country, and some of the highest rates of preterm birth, low birth weight, cesarean section and maternal death. They noted that while 62 percent of Mississippi pregnancies are unplanned, “Mississippi does not require insurance to cover contraceptives and prohibits educators from demonstrating proper contraceptive use.”

In recent years, Republican lawmakers in firm control of the state have declined to expand Medicaid under the Affordable Care Act, a major reason critics say the state’s health outcomes are so poor. In April, however, Gov. Tate Reeves signed a law granting tax credits to supporters of “pregnancy resource centers,” which are usually aligned with faith groups and counsel women against having abortions. Terri Herring, president of the group Choose Life Mississippi, was optimistic that the strengthened centers would help poor women understand their options in the post-Roe landscape.

“These pregnancy resource centers are going to provide that compassionate person to lead these people through their pregnancies,” she said. “A lot of women just need to know how to access what is already available to them.”

As the temperature headed toward 100 degrees on Saturday, the frustration of the clinic escorts was palpable. The street was narrow, and the escorts endeavored to shield the patients from the protesters as much as possible and assure that no pedestrians got hit.

At one point, Dale Gibson, 53, a merchant sailor who volunteered as an escort, began screaming and cursing at a protester named Zach Boyd, who had been holding a small rubber fetus doll aloft every time a patient drove in, then shouting to patients through the fence, imploring them to repent and keep their baby.

Mr. Boyd had moved Mr. Gibson’s folding camp chair. Mr. Gibson objected and accused Mr. Boyd, who was standing at the border of the clinic driveway, of trespassing. An armed security guard intervened, trying to bring down the temperature.

Mr. Gibson said he had had enough of Mississippi and was planning to move to California with Kim Gibson, his wife and a fellow escort. “We’re living in a theocracy, OK?” Mr. Gibson said, adding, “If they think it’s going to end with abortion, people are kidding themselves.”

Ms. Derzis said that the day had been particularly busy, with 35 abortions performed and 25 counseling sessions for women who intend to have the procedure soon.

As the last of the patients rolled in, Ms. Gibson, who stood in the entrance to the parking lot, was sweat-drenched and exhausted. An anti-abortion protester, Madison Gass, 21, asked if she wanted a bottle of water.

Mr. Boyd overheard her. “We will in nine days,” he said. “Praise the Lord.”

AUSTIN, Texas--(BUSINESS WIRE)--As the first multifamily management company to be recognized in the Public Relations and Marketing Excellence Awards, … END_OF_DOCUMENT_TOKEN_TO_BE_REPLACED

There have been whispers of cooling housing and rental prices in the San Francisco Bay Area, but that hasn't yet translated into practical, noticeable … END_OF_DOCUMENT_TOKEN_TO_BE_REPLACED

Cars pass in Independence Square at twilight in Kyiv, Ukraine, Monday, Oct. 31, 2022. Rolling ... [+] blackouts are increasing across Ukraine as the … END_OF_DOCUMENT_TOKEN_TO_BE_REPLACED