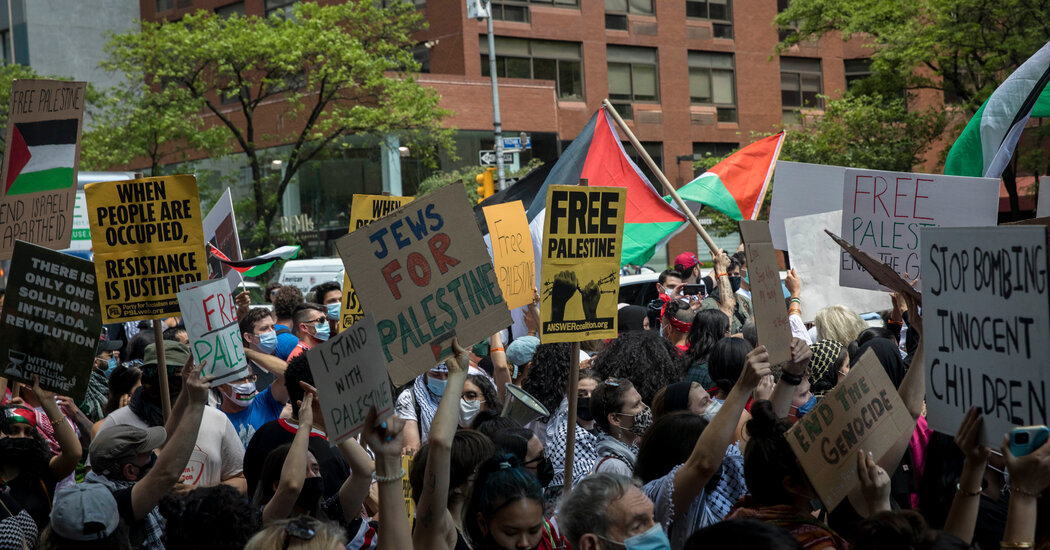 Dan Kleinman does not know quite how to feel.

As a child in Brooklyn he was taught to revere Israel as the protector of Jews everywhere, the “Jewish superman who would come out of the sky to save us” when things got bad, he said.

It was a refuge in his mind when white supremacists in Charlottesville, Va., chanted “Jews will not replace us,” or kids in college grabbed his shirt, mimicking a “South Park” episode to steal his “Jew gold.”

But his feelings have grown muddier as he has gotten older, especially now as he watches violence unfold in Israel and Gaza. His moral compass tells him to help the Palestinians, but he cannot shake an ingrained paranoia every time he hears someone make anti-Israel statements.

“It is an identity crisis,” Mr. Kleinman, 33, said. “Very small in comparison to what is happening in Gaza and the West Bank, but it is still something very strange and weird.”

offering impassioned speeches in defense of the Palestinians on the House floor. At the same time, reports of anti-Semitism are rising across the country.

report released by the civil rights group last month. The A.D.L. recorded more than 1,200 incidents of anti-Semitic harassment in 2020, a 10 percent increase from the previous year. In Los Angeles, the police are investigating a sprawling attack on sidewalk diners at a sushi restaurant on Tuesday as an anti-Semitic hate crime.

Outside Cleveland, Jennifer Kaplan, 39, who grew up in a modern Orthodox family and who considers herself a centrist Democrat and a Zionist, remembered studying abroad at Hebrew University in 2002, and being in the cafeteria minutes before it was bombed. Now she wondered how the Trump era had affected her inclination to see the humanity in others, and she wished her young children were a bit older so she could talk with them about what is happening.

Esther Katz, the performing arts director at the Jewish Community Center in Omaha, has spent significant time in Israel. She also attended Black Lives Matter protests in Omaha last summer and has signs supporting the movement in the windows of her home.

She has watched with a sense of betrayal as some of her allies in that movement have posted online about their apparently unequivocal support for the Palestinians, and compared Israel to Nazi Germany. “I’ve had some really tough conversations,” said Ms. Katz, a Conservative Jew. “They’re not seeing the facts, they’re just reading the propaganda.”

Her three children, who range in age from 7 to 13, are now wary of a country that is for Ms. Katz one of the most important places in the world. “They’re like, ‘I don’t understand why anyone would want to live in Israel, or even visit,’” she said. “That breaks my heart.”

It’s a property that offers a unique open floor plan—plus a hot tub with a view.“It was a Methodist church located in a historic little area of St. … END_OF_DOCUMENT_TOKEN_TO_BE_REPLACED