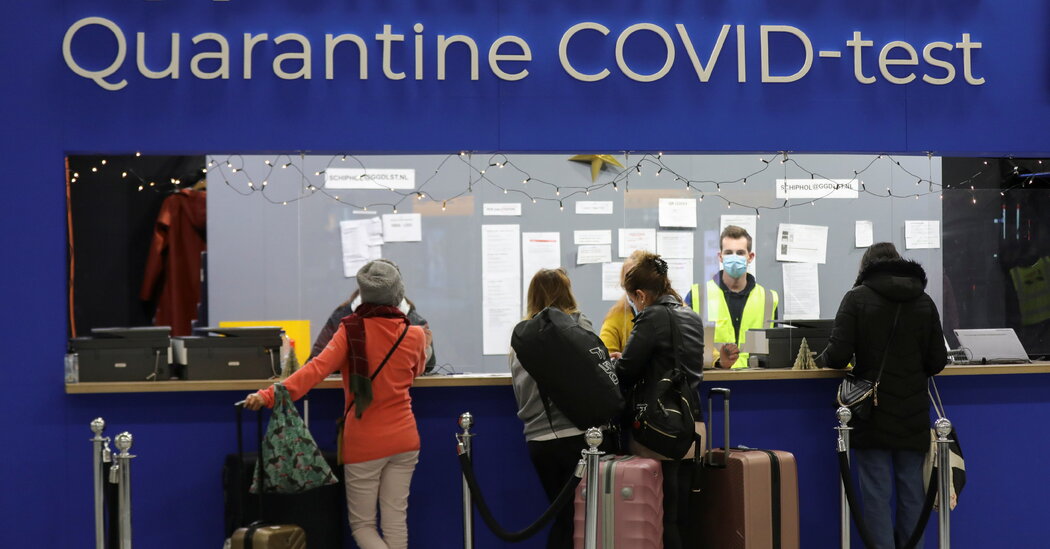 Scientists raced to study a new coronavirus variant as several cases were spotted in Europe and governments around the world announced travel restrictions targeting the southern African region where it first emerged, prompting criticism that the continent was yet again bearing the brunt of panicked policies from Western countries.

Omicron, the new variant first detected in Botswana, sent Europe into high alert after cases were detected in the United Kingdom, Germany, Italy and Belgium. The Czech Republic, Austria, Israel and the Netherlands were all investigating suspected cases of the variant.

Relatively little is known about Omicron. It has mutations that scientists fear could make it more infectious and less susceptible to vaccines — though neither of these effects has yet to be established. Most confirmed cases of the variant are contained to southern African countries, but there are worries Omicron could have spread more widely before scientists there discovered it.

“There’s been a window of probably about two weeks conservatively that this virus has been spreading,” Andrew Pekosz, an epidemiologist from Johns Hopkins Bloomberg School of Public Health said in an interview on Saturday. It is likely the variant is already in New York, he said.

The European Union is restricting travel to and from seven countries in southern Africa — Botswana, Eswatini, Lesotho, Mozambique, Namibia, South Africa and Zimbabwe — while the United States and South Korea have targeted those countries and Malawi. Britain has restricted travel with those eight nations and Angola, Mozambique and Zambia.

Oman and Morocco have all announced similar restrictions.

Israel announced the most restrictive ban Saturday, saying it would close its borders to foreign nationals for two weeks.

Some health officials said that the travel bans may buy some time to figure out how to deal with the new variant. But just as border closures a year ago did little to stop the spread of an earlier coronavirus variant from Britain, scientists said, the latest travel shutdowns had likely come too late.

And richer countries, having already hoarded vaccines for much of 2021, were now penalizing parts of the world that they had starved of shots in the first place, scientists said.

In a news conference on Saturday evening, Prime Minister Boris Johnson said that to curb the spread of the variant, face masks would be required in stores and on public transportation, a rule the country had ended in July.

Britain will also require travelers from abroad to get a PCR test within 48 hours of their arrival and require contacts of those who test positive with a suspected case of Omicron to self-isolate for 10 days, regardless of vaccination status.

The variant was also detected in Hong Kong, which prompted “the most stringent boarding and quarantine requirements” for travelers coming from southern African countries.

“I think certainly caution is warranted to restrict travel and to watch this closely, but at the end of the day, we really need a lot more data to evaluate this new variant,” Philip A. Chan, an infectious disease doctor at Brown University who has helped lead the Covid-19 response for Rhode Island, said.

What we do know, he said, is that the Omicron variant seems to be overtaking the Delta variant in southern African countries, which suggest Omicron is more contagious and that it can overcome some of the natural immunity and vaccine immunity.

“Neither one of those things are good, obviously. And I think that those are the two reasons that have experts and scientists so concerned,” Dr. Chan said. But he still “urges caution and patience.”

Dr. Chan also cautioned that without a robust global vaccination effort, “we are half-treating the pandemic” and leaving the world open to new and more transmittable variants.

AUSTIN, Texas--(BUSINESS WIRE)--As the first multifamily management company to be recognized in the Public Relations and Marketing Excellence Awards, … END_OF_DOCUMENT_TOKEN_TO_BE_REPLACED

There have been whispers of cooling housing and rental prices in the San Francisco Bay Area, but that hasn't yet translated into practical, noticeable … END_OF_DOCUMENT_TOKEN_TO_BE_REPLACED

Cars pass in Independence Square at twilight in Kyiv, Ukraine, Monday, Oct. 31, 2022. Rolling ... [+] blackouts are increasing across Ukraine as the … END_OF_DOCUMENT_TOKEN_TO_BE_REPLACED