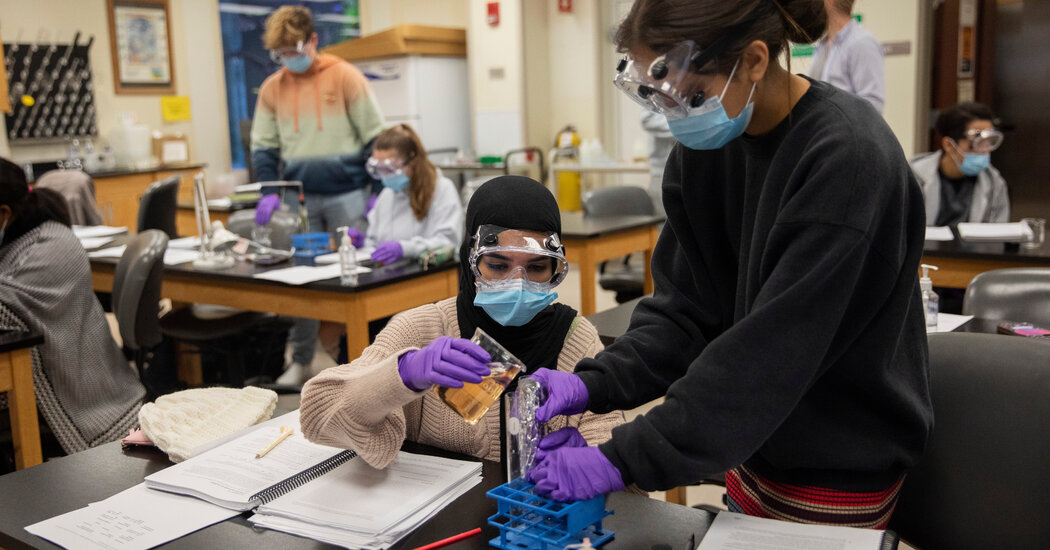 Jazeba Ahmad was a junior in high school when Covid-19 hit and her math education faltered. Ms. Ahmad was enrolled in an international baccalaureate math class intended to provide a strong foundation in areas like algebra, geometry, statistics and calculus.

But her high school in Columbus, Ohio, made a rocky transition to remote learning, she said, and soon, math classes passed with little to show for them. By her first year at Columbus State Community College, Ms. Ahmad, 19, found herself floundering in something that should have been mastered — algebra.

“I missed out a lot in those two years,” Ms. Ahmad said. “If I had learned those skills in high school, I feel like I would have been better equipped to do well in that class.”

Colleges are now educating their first waves of students who experienced pandemic learning loss in high school. What they are seeing is sobering, especially because the latest dismal results from the national exam of fourth and eighth graders suggest that they could face year after year of incoming students struggling to catch up. In almost all states, there were significant declines in eighth-grade math, and most states also showed a dip in reading for fourth and eighth graders.

graduation rates fell for the class of 2021. And undergraduate enrollment has declined 4.2 percent since 2020, according to preliminary data published recently by the National Student Clearinghouse Research Center.

Dr. Artis said that she has observed a shift among students who spent the last years of their high school education primarily online. Those students seem more reserved, she said, less eager to engage in large group activities. The college’s football team is undefeated for the first time in its history, but student attendance at games is down.

“We have had students — for the first time in my 10 years as a college president — say to me, ‘Do we have to attend the parties?’” she said. “There’s almost anxiety associated with coming back into a social setting.”

At the University of Oregon, many students harbored a “level of apathy” toward college, said Amy Hughes-Giard, an assistant vice provost focused on supporting new students.

“They want to connect, but they’re unsure,” she said.

Clutch Anderson was a first-year student at the University of Oregon when Covid-19 torpedoed his college experience. Mr. Anderson, 21, an art and technology major, said he found it difficult to establish routines. During his sophomore year, his classes were remote and he barely left his off-campus apartment. He fell into a depression.

“I had no motivation and couldn’t get anything done in my classes,” he said. Now as a senior, he added, “I’m still trying to get out of that space.”

Mr. Hughes-Giard said the university is trying to instill a sense of belonging, by staging events and creating places to relax. But for the students who are the most behind, she worries that the pandemic’s effects are not going away soon. Even today, they often have other burdens, like working extra jobs to feed themselves and support their families.

“We’re always trying to slim that gap,” she said. “But it feels like we hit the wide open mouth of the river again.”

AUSTIN, Texas--(BUSINESS WIRE)--As the first multifamily management company to be recognized in the Public Relations and Marketing Excellence Awards, … END_OF_DOCUMENT_TOKEN_TO_BE_REPLACED

There have been whispers of cooling housing and rental prices in the San Francisco Bay Area, but that hasn't yet translated into practical, noticeable … END_OF_DOCUMENT_TOKEN_TO_BE_REPLACED

Cars pass in Independence Square at twilight in Kyiv, Ukraine, Monday, Oct. 31, 2022. Rolling ... [+] blackouts are increasing across Ukraine as the … END_OF_DOCUMENT_TOKEN_TO_BE_REPLACED