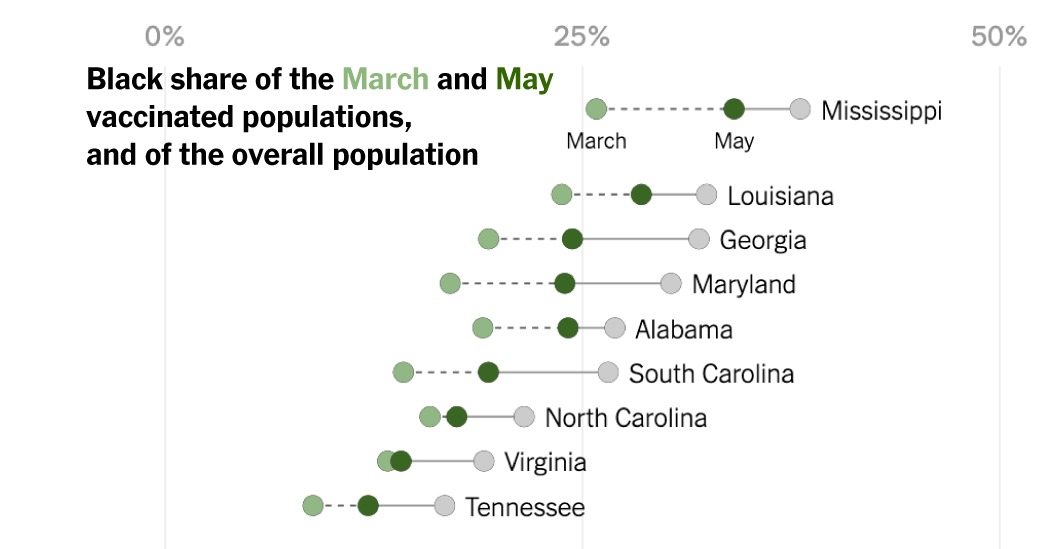 Black and Hispanic people across the United States have received a disproportionately smaller share of vaccinations to date, according to a New York Times analysis of state-reported race and ethnicity information. And vaccine disparities have grown in some of the most socially vulnerable parts of the nation, leaving many low-income communities of color with vaccination rates well below the national average.

However, state and federal data reveal that the country has made some progress toward vaccine parity.

Black share of the March and May vaccinated populations,
and of the overall population

Note: The Times gathered race and Hispanic origin data for vaccinated people from state websites in early March and May. Because completeness of the data varies, comparisons between individual states should be made with caution.

“It’s a great example of what’s possible when you listen to communities and let them lead,” Dr. Cameron Webb, the White House senior policy adviser for Covid-19 equity, said of Mississippi’s growing rates of vaccination among people of color.

“Really it’s been attributed to the role of Black health care providers, faith leaders and community leaders,” Dr. Webb said. In recent weeks, members of these groups have organized vaccine clinics in primarily Black, Hispanic, Vietnamese and rural populations in the state, he said. They have also worked with the state to bring more vaccines to private doctors — a trusted source of information on the vaccine — who could answer questions and advocate for vaccinations.

State officials across the country say they believe that recent improvements in vaccine equity are due in part to the work of their community partners, who have been setting up clinics in parks and at workplaces, and knocking on doors to answer questions and register residents for appointments.

Health officials and community advocates say these efforts have significantly contributed to a rising number of vaccinations in Hispanic populations. In all states reporting race and ethnicity, Hispanic people had a larger share of the cumulative vaccinated population in early May than in March.

Hispanic share of the March and May vaccinated populations,
and of the overall population

Note: The Times gathered race and Hispanic origin data for vaccinated people from state websites in early March and May. Because completeness of the data varies, comparisons between individual states should be made with caution.

Recent polling also indicates that Hispanic people still have significant interest in getting a vaccine, and that lower vaccination rates are due to misinformation about cost and access, as well as concerns about employment and immigration issues. A new Kaiser Family Foundation survey found that one in three unvaccinated Hispanic adults say they want to get a vaccine as soon as possible, a larger share than other racial and ethnic groups.

“We have a real opportunity to keep pushing forward,” said James Rudyk, executive director of the Northwest Side Housing Center in Chicago, which runs vaccine clinics in Belmont Cragin, a largely Hispanic neighborhood.

State and federal officials also see an opportunity to boost vaccinations in underserved communities. The Biden administration has offered tax credits to small businesses to cover paid time off for employees to get vaccinated, and it plans to spend tens of millions of dollars to hire community outreach workers who will provide transportation and arrange child care for those who want a shot.

Federal data also reveals that recent slowdowns in vaccination haven’t been equally distributed across races. In recent days and weeks, Hispanic, Asian, Black and Native Americans have had greater known vaccination rates per capita than the white population.

Source: Centers for Disease Control and Prevention | Note: Race and ethnicity were unknown for 40 percent of those vaccinated. Excludes all data from Texas. Figures show the date people received their first doses. The last five days of data are excluded because not all vaccinations on these dates have been reported yet. Lines show the seven-day moving average of people newly vaccinated.

Officials and public health experts also recognize that some of this shift is an inevitable part of a vaccine campaign that opened up to younger age groups as supplies increased.

“Some of this you would expect to see with just widening eligibility, especially because many of our minority populations are younger,” said Dr. Kirsten Bibbins-Domingo, a physician and epidemiology professor at the University of California, San Francisco.

Despite recent equity gains, officials and community health workers say there is still work ahead to ensure that all communities get equal access to the vaccine.

“We have absolutely had success, but we have to do more,” said Dr. Bibbins-Domingo.

Some states are turning to neighborhood-level data to help them identify and support low-income communities with low rates of vaccination and, often, high proportions of Black and Hispanic residents. In North Carolina, for example, officials have pinpointed 100 census tracts where they intend to surge resources to make vaccines more convenient and accessible.

But that work will take time.

“There are a lot of people out there yet to be vaccinated, but will be vaccinated,” said Dr. Joseph Kanter, the state health officer and medical director at the Louisiana Department of Health. “This is a slower, more deliberate process, but every bit as important.”

The Times gathered race and Hispanic origin data for vaccinated people from state websites between May 3 and May 4, and between March 1 and March 3.

Race and ethnicity information is missing from a significant number of vaccination records across states, as much as a third in some jurisdictions. Consequently, The Times removed from its analysis vaccination records with unknown or unreported race or ethnicity data. Because completeness of the data varies, comparisons between individual states should be made with caution.

Some states do not report (or previously did not report) the race and ethnicity of vaccinated people, but rather of all doses given, which can double-count people who have received two doses of the vaccine. These states are excluded from this analysis and include Delaware, New Jersey and Nevada. North Dakota reports vaccinations as a share of each race or ethnic group’s population, and is excluded as well.

Louisiana, Michigan and West Virginia did not report ethnicity among those vaccinated on some or all of the dates when data was collected, and they are excluded from the Hispanic analysis. While Alabama reports ethnicity, it is excluded from this analysis as most of its vaccinations are missing ethnicity information. The Times excluded the District of Columbia as the ethnicity was unknown for half of its vaccinations in March.

Some states have reported larger-than-expected shares of the race category “other,” and states are still working to determine the reasons for this. The District of Columbia’s “other” category was more than 40 percent of its known vaccinations in March, and it was excluded from the analysis.

Figures for Pennsylvania exclude those who received a vaccine in Philadelphia County.

States also vary in whether they include nonresidents among those vaccinated. States may or may not include people vaccinated by a federal program for long-term care facilities.

The Times used population data from the 2019 American Community Survey. While some states include Hispanic people among racial categories, others report ethnicity separately. Total population figures were adjusted based on the method of race and ethnicity reporting in each state.

The Seattle Seahawks are very much still in the running for Baker Mayfield. (Photo by Stacy ... [+] Revere/Getty Images) Getty Images The Seattle … END_OF_DOCUMENT_TOKEN_TO_BE_REPLACED

(CNN) — Kim Kyung-seop recalls going to cheap bars after class with his friends, where they binged on as much makgeolli as possible. "You know the … END_OF_DOCUMENT_TOKEN_TO_BE_REPLACED