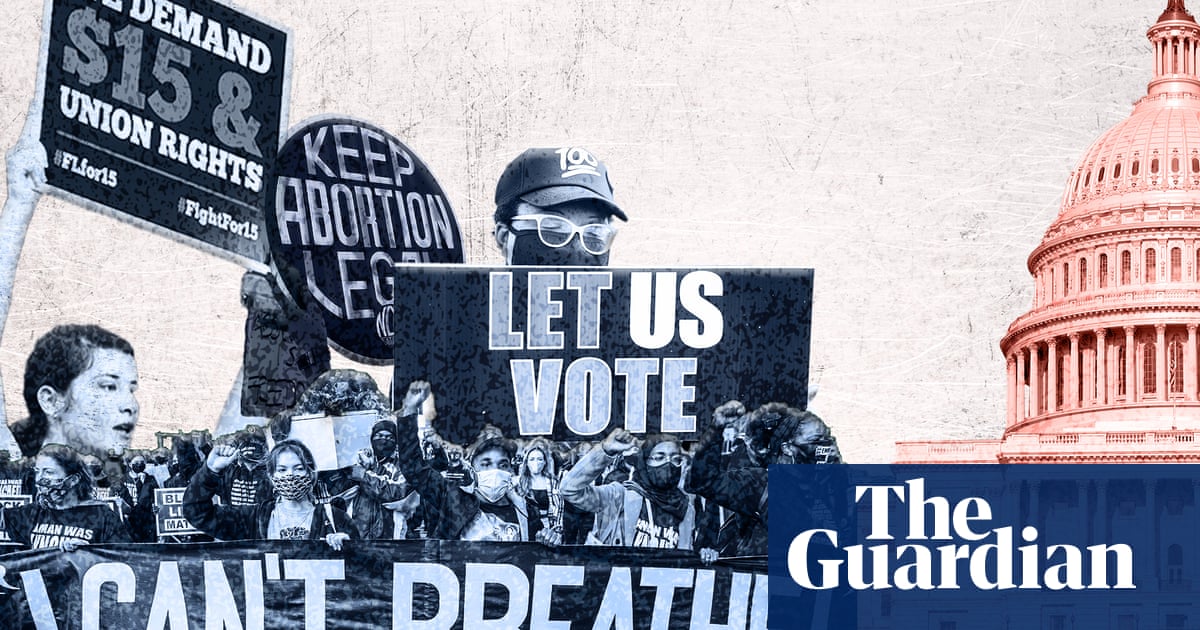 In the first 50 days of the Biden administration, the US House of Representatives has passed major legislation to strengthen voting rights, reform police departments, empower labor unions and tighten gun laws.

The public strongly supports each measure, and Biden is poised, pen in hand, to sign each bill into law. It could seem like the dawn of a new progressive era.

But most analysts think the popular bills are doomed, because to get to Biden, they must first pass the Senate, where Democrats may have a slim majority, but where Republicans are widely seen as having the upper hand.

On a field of fair democratic play, any legislation might fall short of the votes needed to become law.

But critics of the US Senate say that for years now, the chamber has not been a field of fair democratic play, paralyzed by its own internal rules and insulated from the popular will by a 230-year-old formula for unequal representation.

Instead, its critics say, the Senate has become a firewall for a shrinking minority of mostly white, conservative voters across the country to block policies they don’t agree with and safeguard the voter suppression tactics that shore up Republican power.

The numbers are staggering. Currently Democratic senators represent nearly 40 million more voters than Republican senators – but the Senate is split 50-50, with the vice-president, Kamala Harris, wielding the tie-breaking vote. By 2040, 70% of Americans are expected to live in the 15 largest states, and to be represented by only 30 senators, while 30% of Americans will have 70 senators voting on their behalf, according to analysis by David Birdsell of Baruch College’s School Of Public And International Affairs. The Senate has counted only 11 African American members in its history, out of almost 2,000 total.

“There’s no doubt that the Senate is broken and has been broken for a long period of time,” said Ira Shapiro, a former Senate staffer, Clinton administration trade official and the author of Broken: Can the Senate Save Itself and the Country?. “It’s been in decline probably for 30 years, and that decline has deepened over the last 12 years.”

Structural problems with the Senate in the past have been treated as too ingrained to be fixed. But as urgent social movements struggle toward fruition, a focus on the chamber as the last and greatest obstacle to the free exercise of democracy in the United States has sharpened.

More than two centuries ago, to incentivize small states to join the union, the framers of the US constitution gave every state two senators, an arrangement that has always left some citizens vastly overrepresented in the body. But not until recent decades did a clear partisan split emerge in which Democrats were far more likely to represent bigger states, while Republicans represented many small states.

The trend has created an immense discrepancy in the influence that voters from less populous, mostly rural – and white, and Republican – states wield in the Senate, compared with voters from states with big cities and more voters of color.

Today, thanks to urbanization and related shifts, the state of California has 70 times as many people as the state of Wyoming – but each state still gets two senators, giving the small, conservative state the ability to counterbalance the giant, liberal state in any vote on energy policy, taxation, immigration, gun control or criminal justice reform.

As part of this dynamic, Democratic Senate candidates regularly rack up millions more votes overall than Republican candidates – but the Republican caucus, as if by magic, does not shrink, and sometimes even grows.

Few analysts think the basic formula for the Senate will change anytime soon. “I think that of all the things that will not change, the equal representation of every state is at the top of that list,” said Shapiro. “That’s baked into the constitution.”

But other proposals for major changes in the Senate are gathering steam in a way that could produce a breakthrough. One such proposal would reform the filibuster, a rule giving the Senate minority unilateral power to block almost any majority move it chooses.

The filibuster has historically been used by both parties in different ways, but it “has always been used to block measures that would lead to racial equity and justice”, said Erika Maye, deputy senior director of criminal justice and democracy campaigns for Color of Change, a racial justice advocacy group.

“And so in this Congress, in the Senate, we expect it to be used to halt progress on many major policy initiatives that would improve the lives of Black people in particular.”

The columnist David Leonhardt calculated in 2018 that white Americans are represented in the Senate at a rate of 0.35 senators for every million people, versus 0.26 senators for African Americans and 0.19 for Hispanic Americans, prompting the New York Times opinion page to brand the Senate “affirmative action for white people”.

To address this discrepancy, a growing number of leaders, including Barack Obama, have advocated for statehood for Puerto Rico and Washington DC – two majority-minority territories whose representatives in Congress do not currently have the power to vote.

Adding the two as states could add multiple Democratic senators of color to the body, not enough to guarantee a majority, but enough to better reflect the populace and its policy priorities.

Another avenue for progressive change would be to elect Democratic senators in supposedly Republican states, as Georgia did earlier this year, thanks to determined grassroots organizing. The announced retirements next year of three moderate Republican senators, apparently disillusioned with the Donald Trump era, from swing states present an opportunity for Democrats in the 2022 elections.

The battle for the Senate has also intensified as partisan lines have grown deeper. The makeup of the Senate majority mattered less decades ago, when senators voted across party lines more frequently.

But cross-party cooperation in the Senate has dwindled as American politics has grown more sharply partisan, with pressure from cable news and social media, a culture of partisan demonization and recrimination, nonstop fundraising demands and the rise of incessant campaigning for office allowing no time to breathe – or legislate – between one election and the next.

That does not mean senators are no longer capable of breaking ranks, as the Louisiana Republican Bill Cassidy notably did in voting to convict Trump at his second impeachment trial, along with six other Republicans.

The key to fixing the Senate, Shapiro thinks, lies in more senators acting like Cassidy, to “put national interest above partisan interest”.

“I try to call on senators to be senators, like what they’re supposed to be,” Shapiro said, instead of blindly following the party leadership. “They’ve abandoned their responsibility to do the job.”

KRASNIK, Poland — When local councilors adopted a resolution two years ago declaring their small town in southeastern Poland “free of L.G.B.T.,” the … END_OF_DOCUMENT_TOKEN_TO_BE_REPLACED

For over a year, a special team of editors within The Wall Street Journal analyzed the state of the newsroom and produced a detailed, lengthy report … END_OF_DOCUMENT_TOKEN_TO_BE_REPLACED

Ramsey Clark, who championed civil rights and liberties as attorney general in the Johnson administration, then devoted much of the rest of his life … END_OF_DOCUMENT_TOKEN_TO_BE_REPLACED