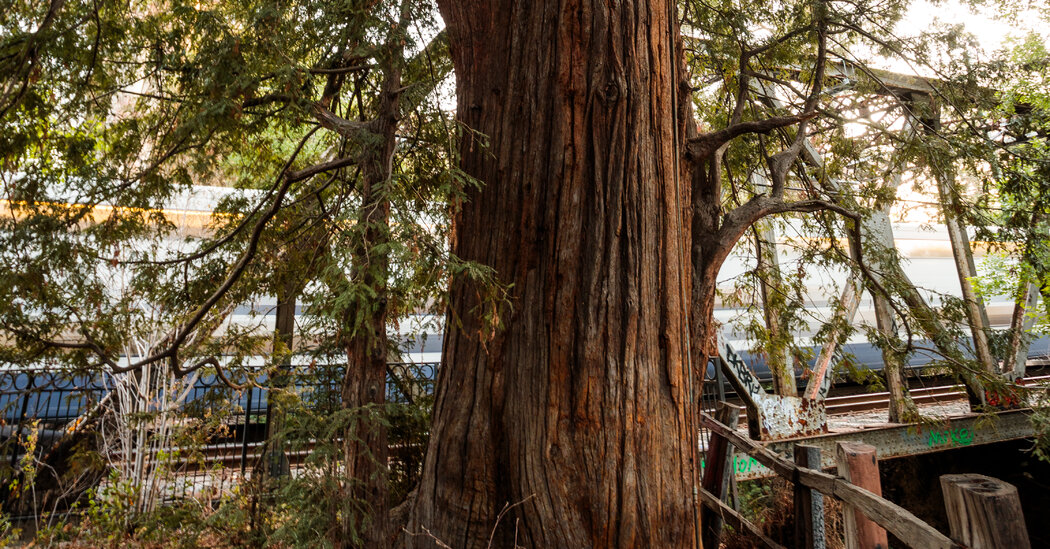 PALO ALTO, Calif. — It could have toppled long ago.

For one thing, it’s a loner, miles from kin that thrive in far wetter climates. Its massive roots are sandwiched between a concrete wall and railroad tracks. It has weathered coal and diesel smoke from passing trains for more than a century. It has survived earthquakes and record-breaking droughts, and a less destructive man-made force: graffiti.

El Palo Alto — a 1,081-year-old redwood tree that has long served as the 120-foot-tall symbol of Palo Alto, the city that took its name — is arguably Silicon Valley’s original no-tech start-up.

It still stands after nearly 11 centuries because it has been singled out for veneration, and people tend to have an emotional connection to charismatic megaflora with a story to tell, from the cedars of Lebanon in the Middle East to the major oak that supposedly housed Robin Hood and his men in Sherwood Forest. That’s El Palo Alto on the official emblem of the City of Palo Alto and the official seal of Stanford University. And that’s El Palo Alto, sort of, that dances around at Stanford games as the unofficial campus mascot, a googly-eyed oddball costumed tree with floppy branches.

“It embodies the pioneer spirit of Palo Alto,” said Walter Passmore, the city’s former urban forester, who cared for the tree for nine years until he left the position in May. “Palo Alto has always prided itself on being home to innovators, leaders and creative thinking. That is what some people see in the tree.”

After decades of near-death experiences, El Palo Alto was awaiting one last rescue effort that Mr. Passmore and others said would assure the future of the tall tree. Caltrain, a commuter rail line, has been planning to electrify the diesel trains that rumble about 25 feet away from the tree, a move that would eliminate the pollution that spews onto it daily.

But the big tree will have to fend off the slings and arrows of its urban location for a while longer. The Caltrain project to switch from diesel to electric was supposed to happen this year, but officials decided to postpone it — until 2024.

On a recent visit, Mr. Passmore walked beneath El Palo Alto’s branches, a damp and spicy earthiness filling the small creekside park that serves as the tree’s base less than a mile from City Hall. As he spoke, he had to pause. The blinking red lights and clanging bells of a railroad crossing gate interrupted. A minute or two later, a Caltrain diesel, smoke trailing, whizzed by.

El Palo Alto’s very existence there has been a fluke. Redwoods are insatiable rain and fog drinkers, thriving in places where the annual rainfall is five to 10 feet. In Palo Alto, less than two feet of precipitation is common. The tree is shorter than it used to be — it was about 162 feet tall in the 19th century but parts of the top died, likely from coal and diesel smoke — and as a result it is a pipsqueak compared with other, taller redwoods that approach 400 feet. And it is still only middle-aged — the oldest redwood in the country is estimated to be some 2,500 years old.

Mr. Passmore believes that a coast redwood seed may have been swept down from the mountains by San Francisquito Creek, took purchase and was nourished over the centuries by the creek waters.

Population growth and a flurry of wells drew down the creek’s water table in past decades, depriving the tree’s roots of water. Termites and compacted soil added to the decline. In the 1950s, the tree appeared gaunt and sickly. George Hood, a city arborist at the time, concocted a plumbing system that sent water up the trunk that bathed El Palo Alto in fog-like mist.

“He called it a ‘Fool the Redwood’ plan,” said David Dockter, a retired city arborist who helped care for the tree for more than two decades and still monitors its health. “Redwoods drink from their crown as well as their roots, and he wanted to fool the redwood into thinking it was on the coast, getting a drink of water every day when the fog came in.”

Wells were capped to bring the water table back up. Ground-penetrating radar was brought in to check the health of the tree’s interior. A camera-mounted drone was flown to the crown for an inspection. And a prism was placed at the top of the tree so surveyors can monitor its stability.

“So far it hasn’t moved,” Mr. Dockter said. “That would be the first sign there’s ground movement.”

Nevertheless, an emergency backup plan was set in motion: El Palo Alto’s seeds were collected and planted in 2004 in a historic tree nursery run by the nonprofit group American Forests, in case the tree keeled over and died.

El Palo Alto grows on the land that once belonged to the Ohlone Costanoan Esselen Nation. It entered recorded history in 1769, when the Spanish military officer Gaspar de Portola and 63 of his men rode into the region on a mission to expel the Jesuits from California. They spied the lone, double-trunked redwood from far off and camped near it. They first referred to it as Palos Colorados, which loosely translates to “red trees,” because of the redwood’s red bark. Later, when the second trunk came down in the 1880s, the tree became known as El Palo Alto, a Spanish phrase meaning “the tall stick.”

One of the unsolved mysteries of El Palo Alto’s history is that the tree might be a pretender of sorts.

“The tree we know as El Palo Alto might not be the tree Portola camped under,” said Steve Staiger, a historian for the Palo Alto Historical Association. “It may have been a tree that was further downstream that was chopped down by a Spanish military engineer to ford the creek.”

Leland Stanford, the president of the Southern Pacific Railroad and a governor of California, purchased the land where the tree stood in 1876 for his family home and his Palo Alto stock farm, where he later founded Leland Stanford Junior University. The college was named after his only son, who died from typhoid on a trip to Europe at the age of 15.

After the loss of the second trunk in the 1880s, Mr. Stanford directed that a stout wall be built to protect the remaining trunk, using logs and railroad ties. His widow, Jane Stanford, later had a larger, 25-foot-tall concrete wall built to keep the creek from taking out the roots and toppling the tree.

Stanford University students used to hold a contest each year to fix the class flag to the top of the tree. The last climb was on the night before Admission Day in 1909. It went as student high jinks often go: rather poorly.

According to a City of Palo Alto report, “the student became marooned in the crown after dark, and needed to be rescued by fellow students.”

In the 1970s, a new tradition was born — having students dress up as a zany El Palo Alto to boost school spirit at sporting events. The irreverent mascot of the marching band, called the Stanford Tree, has become so revered that past tree costumes are stored in a climate-controlled room in the archives of the university’s Green Library.

The current Stanford Tree is Grayson Armour, 21, a junior studying aerospace computational engineering. He was chosen from a group of vying “sprouts” to perform at games with uninhibited dancing, and has already adopted the same unconventional fighting spirit of the tree to which his googly-eyed costume pays homage.

J.T. Brown #23 of the Tampa Bay Lightning skates into goalie Henrik Lundqvist #30 of the New York Rangers during the second period in Game Six of the … END_OF_DOCUMENT_TOKEN_TO_BE_REPLACED

The Mississippi River town of Ste. Genevieve, MO, might be the ideal spot for a buyer in search of a refreshing idea.This mixed-use structure on the … END_OF_DOCUMENT_TOKEN_TO_BE_REPLACED