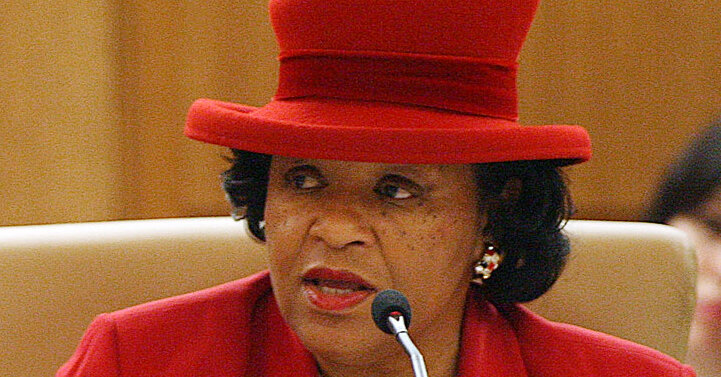 Thelma Harper, a Democrat who became the first African-American woman elected to Tennessee’s State Senate, died on Thursday. She was 80.

The death was confirmed by her daughter, Linda Harper. She did not say where her mother died or what the cause was.

Ms. Harper entered the Senate in 1989 and was the state’s longest-serving female senator by the time she retired, in 2018.

“Whether she was fighting landfills for her neighbors, serving a community organization or leading a hearing in the legislature, Thelma Harper was a strong voice for her community, for justice and our most vulnerable children,” the State Senate’s Democratic Caucus said in a statement.

said in the speech, “when we called upon Al Gore, he always listened to our voices. He always responded to our needs. And he always fought on our side.”

In 2008, she was a leader in Hillary Clinton’s presidential campaign in Tennessee.

Lt. Gov. Randy McNally, a Republican, called Ms. Harper a “transformative public figure,” “a fierce advocate for her constituents and the city of Nashville” and a role model. In a tribute on Twitter, he made reference to her fondness for eye-catching hats.

“Today the legendary Thelma Harper traded in her signature hat for a halo,” he wrote.

Thelma Harper was born on Dec. 2, 1940, in Brentwood, Tenn., just south of Nashville. She earned a bachelor’s degree in business administration and accounting at Tennessee State University in Nashville in 1978. Before joining the State Senate, she served for eight years on Nashville’s Metro Council. Her husband, Paul, died in 2018.

That same year, when she was asked why she was retiring, she told The Tennessean that it was time for the next generation of leaders to take over, adding, “Look, man, I’ve been here forever.”

Whether you optimistically hope that mortgage rates will decline or are resigned that rates will stay elevated above the historic lows of 2021, you … END_OF_DOCUMENT_TOKEN_TO_BE_REPLACED

A resident of Nikopol, Ukraine, in her backyard last month, with smoke rising from an area on the opposite bank of the Dnipro River. Credit...David … END_OF_DOCUMENT_TOKEN_TO_BE_REPLACED