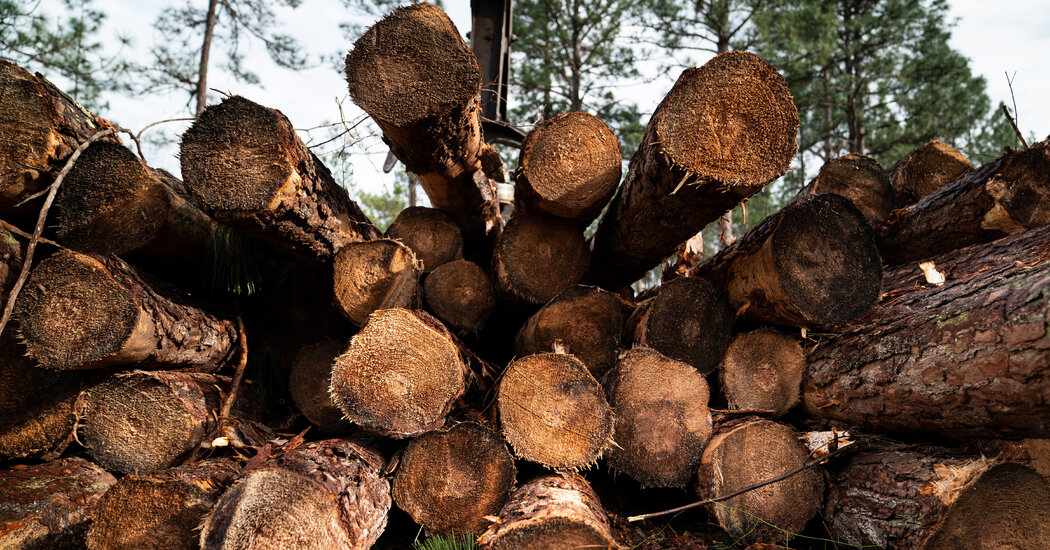 Pellet makers source wood from thousands of landowners, who are often eager to earn revenue to offset land taxes. Enviva opened its first mill in Ahoskie, N.C., in 2011, promising to make pellets mainly from wood “residues” such as tree tops, branches and sawdust with no other market.

When land is logged, the thick, straight trunks typically go to a sawmill that churns out things like two-by-fours. Pellet makers take small pieces that may have no other market and vie with makers of paper, cardboard boxes and diaper fluff for the rest. About 3 percent of harvested wood from the South goes to pellets, according to Consuelo Brandeis, a research forester with the United States Forest Service.

Pellet makers’ pledges to rely on waste wood “painted them into a corner,” said Robert Abt, a forest economist at North Carolina State University in Raleigh, because the wood-products industry already used its supplies relatively efficiently, leaving little waste.

While longer pieces of wood that are too crooked or knotted for sawmills do make up part of Enviva’s supply, Jennifer Jenkins, Enviva’s chief sustainability officer, who holds a Ph.D. in ecosystem ecology, said the company’s sourcing was sustainable because it buys only from landowners who commit to regrow trees, and because the Southeast’s forests overall are expanding. Pellets sourced from such regions should be considered carbon neutral, according to accounting rules laid out by the Intergovernmental Panel on Climate Change, a United Nations body that provides scientific information on climate change, Dr. Jenkins said.

Dr. Jenkins said the company had installed air pollution controls that exceed requirements. A community relations manager said he had received no noise complaints related to the Northampton County mill.

AUSTIN, Texas--(BUSINESS WIRE)--As the first multifamily management company to be recognized in the Public Relations and Marketing Excellence Awards, … END_OF_DOCUMENT_TOKEN_TO_BE_REPLACED

There have been whispers of cooling housing and rental prices in the San Francisco Bay Area, but that hasn't yet translated into practical, noticeable … END_OF_DOCUMENT_TOKEN_TO_BE_REPLACED

Cars pass in Independence Square at twilight in Kyiv, Ukraine, Monday, Oct. 31, 2022. Rolling ... [+] blackouts are increasing across Ukraine as the … END_OF_DOCUMENT_TOKEN_TO_BE_REPLACED