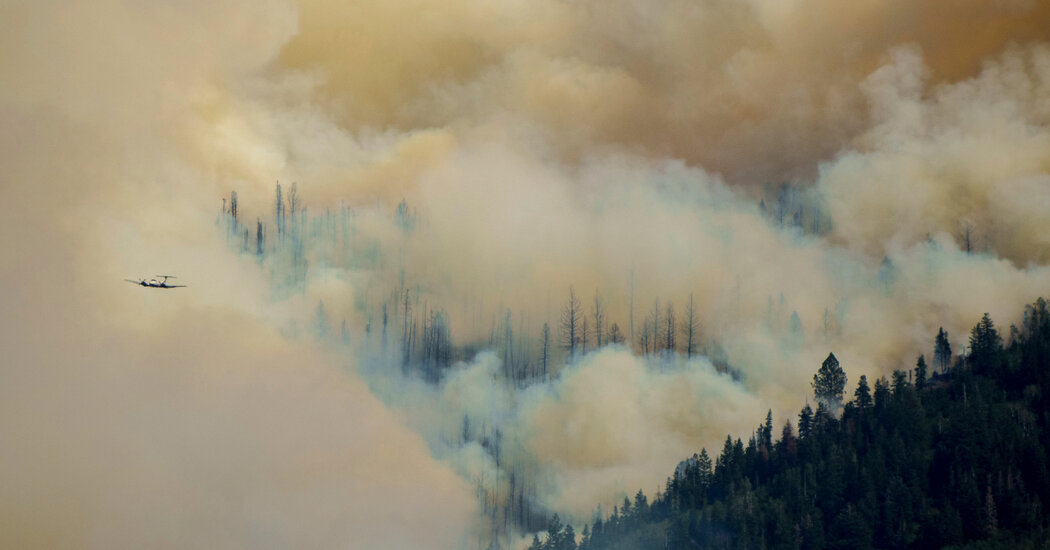 As intense wildfires continued to burn across parts of the western United States on Sunday, prompting thousands of evacuations in Utah and Northern California, firefighters in Oregon announced on Sunday that they had fully contained what had once been the country’s largest wildfire this year.

The Dixie Fire in California had spread to more than 550,000 acres across four counties in the northern part of the state and was 31 percent contained as of Sunday morning, according to Cal Fire. The blaze is now the largest on record in the United States, pushing to second place the Bootleg Fire in Oregon, which the authorities said on Sunday was 100 percent contained after ravaging more than 400,000 acres since early July.

In eastern Utah, the fast-moving Parleys Canyon Fire, which ignited on Saturday afternoon, quickly forced the evacuation of at least 6,000 homes, according to the authorities. Gov. Spencer Cox of Utah warned that Sunday would be “another difficult fire day,” as the blaze had charred at least 1,500 acres east of Salt Lake City and was 0 percent contained.

Mr. Cox said that some of Utah’s firefighters were returning from wildfire duty in other states to fight the blaze in Parleys Canyon.

Federal Emergency Management Agency said on Sunday that it had agreed to a request from officials in Utah to help cover the cost of fighting the fire. The American Red Cross of Utah said that 25 people had stayed in a shelter that the organization had set up at a high school in Park City on Saturday night.

State fire authorities said the fire started when a car sent sparks flying along a highway after its catalytic converter, a device that controls exhaust emissions, malfunctioned.

The Utah Department of Public Safety said in a statement on Saturday that the authorities had discovered two fires burning a mile apart along a highway in Parleys Canyon, and that the blaze quickly spread up a nearby mountain.

The fire continued on an eastward path and was moving “at a rapid pace,” the department said.

The sheriff of Summit County, which includes Parleys Canyon, said on Twitter on Saturday night that some residents had refused to evacuate, and that their decision was putting firefighters and other emergency workers in danger.

three wildfires, of which Parleys Canyon is the largest. There was a possibility of rain and thunderstorms across much of the state between Tuesday and Thursday, according to the National Weather Service in Salt Lake City.

In Northern California, the Dixie Fire had destroyed 1,120 structures as of Sunday and threatened another 14,838 buildings, the authorities said. Three firefighters sustained unspecified injuries, according to Cal Fire, which said the cause of the fire was still under investigation.

The blaze is the largest single-origin wildfire in California history. Last year, lightning strikes ignited multiple wildfires in three national forests in California in what became known as the August Complex, burning more than a million acres.

For more than a month, firefighters have been struggling to quell the flames of the Dixie Fire, which earlier this month destroyed the Gold Rush town of Greenville, Calif., where before-and-after satellite photos showed the devastation.

Thunderstorms were in the forecast on Sunday for the area where the Dixie Fire was burning, a development that emergency responders said could hamper firefighting efforts if there are lightning strikes. A drought in the region, where temperatures could reach 100 degrees with less than 18 percent humidity, left the area particularly vulnerable to wildfires, the authorities said.

Although wildfires occur throughout the West every year, scientists see the influence of climate change in the extreme heat waves that have contributed to the intensity of fires this summer. Prolonged periods of abnormally high temperatures are a signal of a shifting climate, they say.

The Mississippi River town of Ste. Genevieve, MO, might be the ideal spot for a buyer in search of a refreshing idea.This mixed-use structure on the … END_OF_DOCUMENT_TOKEN_TO_BE_REPLACED

More From ForbesJan 26, 2022,09:00am ESTCompany Named For Jetsons Son Unveils Autonomous Cargo EVTOL Drone Of The Near … END_OF_DOCUMENT_TOKEN_TO_BE_REPLACED

The prison in Hasaka where thousands of Islamic State fighters are held, in 2019.Credit...Ivor Prickett for The New York TimesThe prison at the center … END_OF_DOCUMENT_TOKEN_TO_BE_REPLACED