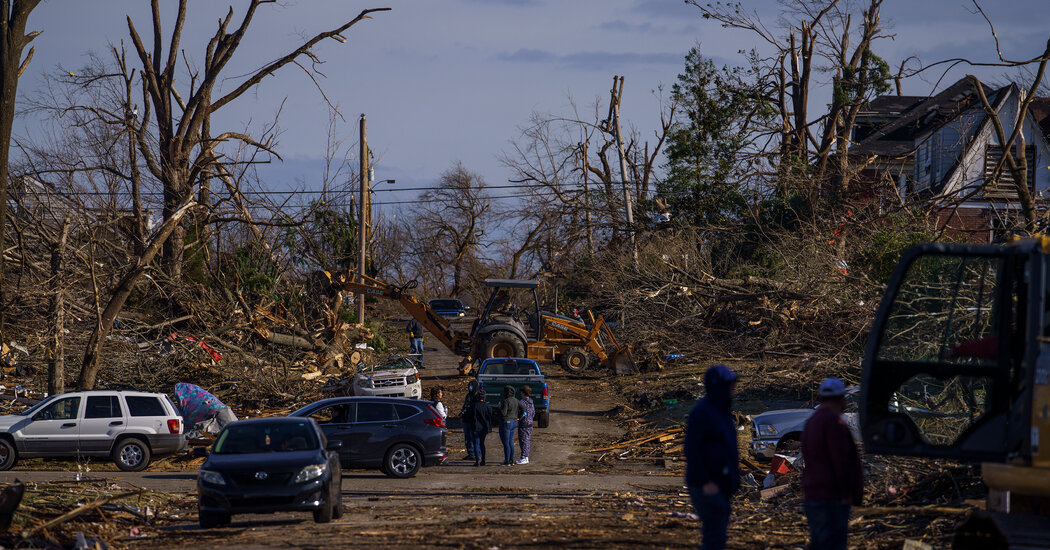 Several tornadoes touched down in Kentucky, one of them traveling for more than 200 ruinous miles. At least 70 people had been killed in the state, a toll that was likely to rise.

While the destruction was spread throughout western Kentucky, much of the estimated death toll came from a single building, the Mayfield Consumer Products candle factory, just southwest of the small city of Mayfield. Officials described an almost unfathomable level of destruction there, a knot of concrete and metal strewn with cars and 55-gallon drums leaking corrosive fluids into the wreckage.

“We had to at times crawl over casualties to get to live victims to get them out and mark those casualties as we worked our way through the rubble,” said Jeremy Creason, chief of the Mayfield Fire Department and the director of the city’s emergency medical services.

Mr. Beshear said that the death toll at the candle factory “may end up being the largest loss of life of any tornado event in a single location” in Kentucky history.

Mayfield, a town of around 10,000 people in a western corner of the state known as the Jackson Purchase, was the site of some of the worst destruction of the outbreak. On Saturday, the city’s grid of narrow streets was a perilous maze of downed power lines and rubble, with the insides of buildings spilling out over the sidewalks. The main fire station was hit, as was the police station, many of the police cars destroyed along with it.

The First United Methodist Church, which had a cavernous sanctuary with a stone facade, had almost entirely collapsed. Along the two-lane highways snaking into town, the tornado had left displays of its wrath, with homes missing brick exteriors, churches without roofs and seemingly sturdy trees that had been snapped like twigs.

Outside Jackie Nelson’s home, a reindeer, a Santa figure and a sleigh filled with presents were strewn across her lawn along with pieces of the roof. Her windows were blown out, and a trailer was perched in the trees near the house. She and her husband had huddled in the basement when the local news warned that a deadly storm was coming. Her husband’s sister did not make it, she said; his brother-in-law is in the hospital.

Many property purchasers in Alaska possess the same vision: Either hunker down away from the madding crowds in a refined log cabin or operate a … END_OF_DOCUMENT_TOKEN_TO_BE_REPLACED