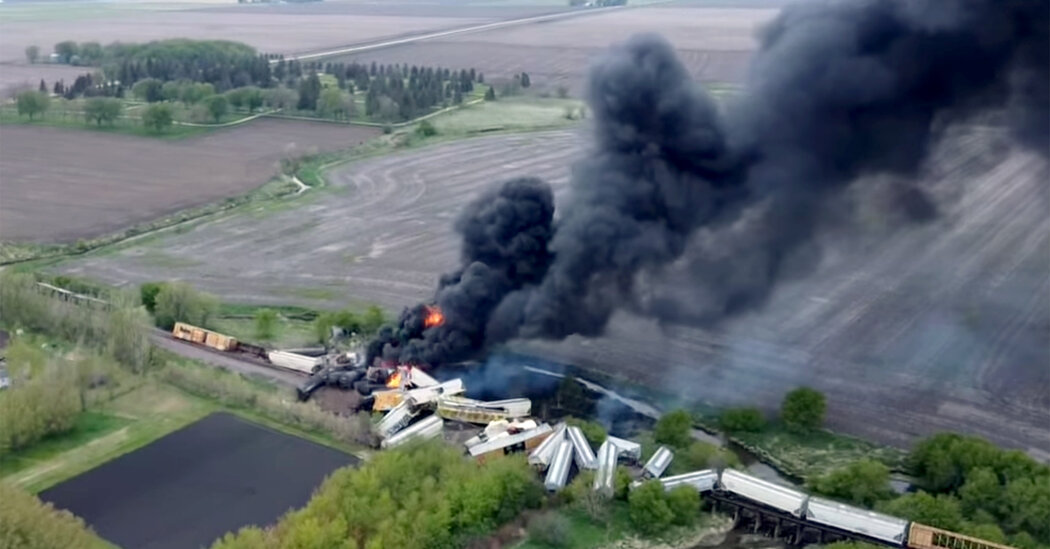 About 80 people in a city in northwest Iowa were evacuated on Sunday afternoon after part of a Union Pacific train hauling hazardous materials derailed and then caught fire, officials said.

The derailment of about 47 cars took place around 2 p.m. in Sibley, said Robynn Tysver, a spokeswoman for Union Pacific. By 3 p.m., local officials had texted an evacuation order to people nearby, citing “HAZMAT train derailment and fire.”

There were no reports of injuries or fatalities, said Lucinda Parker, a spokeswoman for the Iowa Department of Homeland Security and Emergency Management. It was not clear where the train was headed or how many total cars it had.

Mike Schulte, a member of the Osceola County board of supervisors, and Ms. Tysver said they were unable to confirm what materials were on the train when it derailed.

radio station KIWA reported. Sibley, which is about 80 miles north of Sioux City, has a population of about 2,700.

The combination is used in the mining industry as an explosive. It was also used in the Oklahoma City bombing in 1995 that killed 169 people and injured 467, she said.

Dan Bechler, the emergency management coordinator for Osceola County, said in an interview that responders were still trying to piece together what happened.

Robin Eggink and her husband, Scott, were eating inside a Pizza Hut when they noticed a large train nearby.

“It was slowing down and then it came to a stop,” she said.

Mr. Eggink, 52, had worked as a train conductor for about a year and “he just knows by the noise that it shouldn’t have came to a stop like it was,” she said. He said the noise sounded like the “squeal” of some type of brake being deployed.

Seeing the train stop at that location was unusual, Ms. Eggink said. The train was blocking a highway intersection and “it can’t stop for very long where it’s at,” she recalled thinking.

About 10 minutes later, they saw the smoke and fire, Ms. Eggink said.

Ms. Tysver said she could not comment on such details because the derailment was still being investigated.

Trains, she said, are the safest transportation method for such material.

“Per million miles traveled, rail is far safer than highway or vessel,” she said. “And you can’t really transport bulk quantities of hazmat on an airplane.”

AUSTIN, Texas--(BUSINESS WIRE)--As the first multifamily management company to be recognized in the Public Relations and Marketing Excellence Awards, … END_OF_DOCUMENT_TOKEN_TO_BE_REPLACED

There have been whispers of cooling housing and rental prices in the San Francisco Bay Area, but that hasn't yet translated into practical, noticeable … END_OF_DOCUMENT_TOKEN_TO_BE_REPLACED

Cars pass in Independence Square at twilight in Kyiv, Ukraine, Monday, Oct. 31, 2022. Rolling ... [+] blackouts are increasing across Ukraine as the … END_OF_DOCUMENT_TOKEN_TO_BE_REPLACED