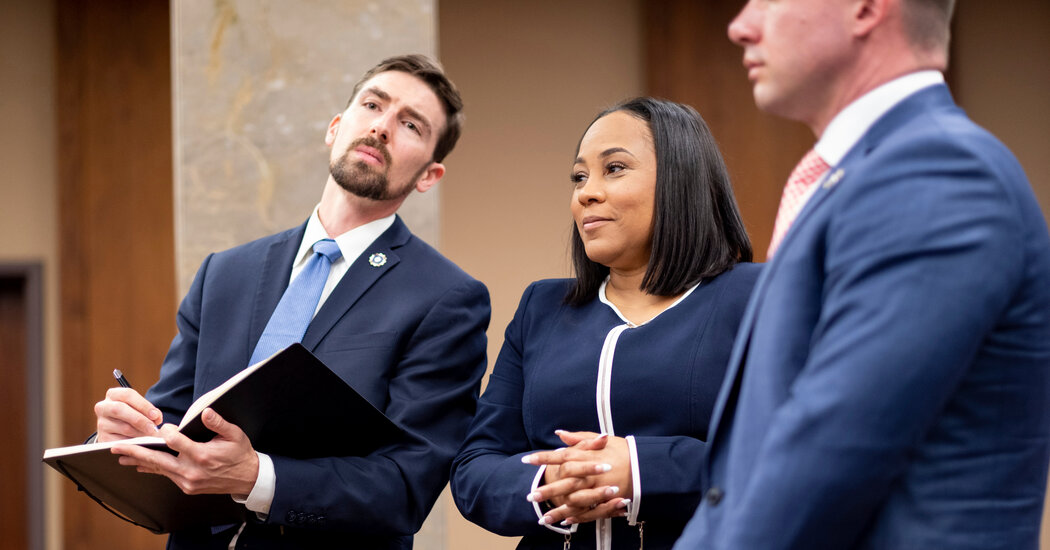 Prosecutors in Atlanta have informed 16 Trump supporters who formed an alternate slate of 2020 presidential electors from Georgia that they could face charges in an ongoing criminal investigation into election interference, underscoring the risk of criminal charges that Donald J. Trump and many of his allies may be facing in the state.

The revelations were included in court filings released on Tuesday in an investigation being led by Fani T. Willis, the district attorney of Fulton County. They showed that while much attention has been focused on the House hearings in Washington into the Jan. 6 attack on the Capitol, and the extent to which the Justice Department will investigate, it is a local prosecutor in Atlanta who may put Mr. Trump and his circle of allies in the most immediate legal peril.

“This is a sign of a dramatic acceleration of her work,” said Norman Eisen, who served as special counsel to the House Judiciary Committee during the first Trump impeachment. He added that prosecutors typically work their way “up the food chain, so usually the first wave of target letters is not the last.”

criminal solicitation to commit election fraud — most notably his postelection phone calls to Georgia officials like Brad Raffensperger, the secretary of state, whom he pressured “to find 11,780 votes,” enough to reverse the election results. A 114-page Brookings Institution analysis of the case, co-authored by Mr. Eisen, found Mr. Trump “at substantial risk of possible state charges predicated on multiple crimes.”

Ms. Willis, in court filings, has indicated that a number of other charges are being considered, including racketeering and conspiracy, which could take in a broad roster of Trump associates both inside and outside of Georgia. Ms. Willis is also weighing whether to subpoena Mr. Trump himself and seek his testimony, according to a person familiar with the inquiry, as she has recently sought the testimony of seven of his allies and advisers before the special grand jury.

Lawyers for 11 of the electors reacted strongly to the designation of their clients as targets, saying that a local prosecutor had no jurisdiction to determine which federal electors were fake and which were real. The lawyers, Holly A. Pierson and Kimberly Bourroughs Debrow, accused Ms. Willis of “misusing the grand jury process to harass, embarrass, and attempt to intimidate the nominee electors, not to investigate their conduct.”

Ms. Willis’s office did not immediately comment, but she has said that “anything that is relevant to attempts to interfere with the Georgia election will be subject to review.”

been identified as targets of Ms. Willis’s investigation: David Shafer, a Trump ally who chairs the state Republican Party, and Burt Jones, a Georgia state lawmaker who is running for lieutenant governor.

in Hawaii, where both the Nixon and Kennedy campaigns submitted electors, in asserting that there was precedent for more than one slate of electors.

Mr. Jones, in a motion earlier this week, called for Ms. Willis to recuse herself, because she has headlined fund-raisers for Charlie Bailey, a Democrat who is running against Mr. Jones.

Ms. Willis rejected that idea in a filing on Tuesday.

“The subject of the grand jury investigation that has ensnared Jones has no factual connection to the ongoing campaign for lieutenant governor,” she wrote, adding that “support for a political opponent” is “not among the extremely rare instances where a prosecutor is shown to have a personal interest in a prosecution.”

The filing also said that Mr. Jones had “been treated identically to each of the 15 other unofficial ‘electors’ who represented themselves as properly certified electors for the 2020 presidential election and who received similar target status notification.”

The potential legal exposure of the Republican officials could complicate Georgia’s November elections, starting with the lieutenant governor’s race. Last week, Mr. Bailey accused Mr. Jones of being “anti-American and unpatriotic” for taking part in a “failed attempted overthrow of the American government.”

The investigation has also highlighted divisions within Republican ranks. Mr. Shafer has been a stalwart supporter of Mr. Trump and his baseless claims of a stolen election, which have put him at odds with Gov. Brian Kemp, a Republican, as well as Mr. Raffensperger. Both Mr. Kemp and Mr. Raffensperger easily defeated Trump-backed primary challengers this year.

Representative Jody Hice, who lost in a May primary to Mr. Raffensperger, revealed this week that he had been subpoenaed in the investigation. A loyal Trump ally, he led a January 2021 challenge in the House of Representatives to the certification of Georgia’s electors. He is seeking to challenge the subpoena in federal court.

The biggest question looming over the investigation, of course, is the potential exposure of Mr. Trump himself.

“She’s made clear that she has a sharp eye on Trump,” Mr. Eisen said of Ms. Willis, adding that there were indications “that this first salvo of target letters will be followed by additional possible targets, culminating in the former president himself.”

Three men were indicted in the death of the notorious gangster James (Whitey) Bulger, who was beaten to death four years ago in a West Virginia … END_OF_DOCUMENT_TOKEN_TO_BE_REPLACED

Dr. Connolly and Dr. Mott live in the North Baltimore neighborhood of Homeland, known for its strong public schools and colonial architecture, which … END_OF_DOCUMENT_TOKEN_TO_BE_REPLACED